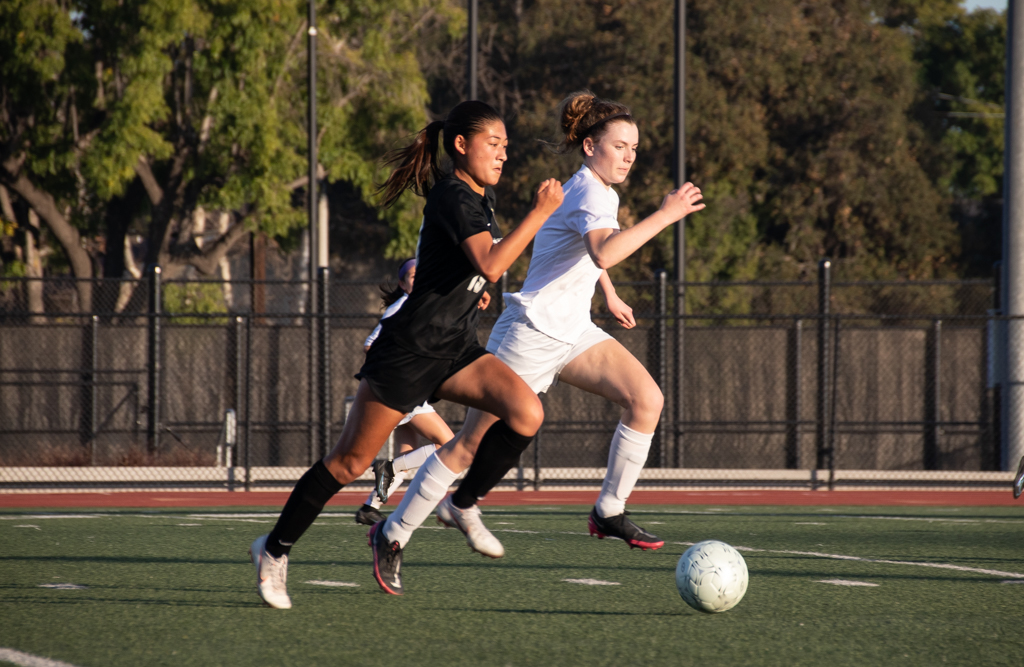 The Tigers struggled to find their rhythm on the field, resulting in a scoreless 1-0 game for South Pas.

Girls soccer fell 1-0 to the Monrovia Wildcats during their first league game on Wednesday, Jan. 5. Plagued by absences and injuries, the Tigers were unable to defeat Monrovia’s aggressive playing style. However, both teams put up a valiant effort, preventing almost all attempts at scoring resulting in a very close match.

From the outset, Monrovia was hungry for a win. Even South Pas’ strong passes and shots could not beat the Wildcats clawing for the ball. Monrovia charged down the field and attempted a shot minutes into the game, but freshman goalie Ava Hartstein stepped up and blocked the incoming goal.

Offensively, the Tigers had shining moments in the first quarter. Junior Sabrina Bluml stood out by being the arbiter of passes, seamlessly darting the ball between her teammates. The Tigers’ inability to crack the Wildcat goalkeeper proved deadly as shot after shot at the goal was blocked. This was a major trend throughout the game: the Tigers approached the goal with strength but lacked the follow through on the attack and couldn’t put the ball at the back of the net.

On the defensive side, sophomore Emily Monterroso and junior Kaoruko Endo kept up the aggressive playing styles. Endo approached the ball with laser-like precision, surveying her next move. Monterosso exploded on the field with strong blocks against the Wildcats offense.

Similar to Bluml, junior Ellie Yamada kept her composure and stayed close to the bounds of the field as she crept towards the goal box, being tailed by multiple of Monrovia’s offense. Her attempt was short-lived, however, as the Monrovia goalie swiftly captured the ball. As Hartstein attempted to stop an incoming attack by kicking the ball back in play, she left the goal open for a shot from the center, which Monrovia took advantage of to make the score 1-0.

By the 20-minute mark, the Tigers had yet to score or make any surmountable gains. Any and all plays down the field were stopped or driven off, even in moments of peerless control.

The Tigers had a strong offensive and defensive line but they were no match for the Wildcats’ expert interceptions. The Tigers had a rapport of passes, such as between sophomores Brynn Dubester and Zoe Kim, but Monrovia’s strikers intercepted the ball to regain control. As the first half came to a close, the score stayed 1-0.

When the second half began, there was an air of familiarity as the Tigers grew more frustrated but the patterns remained the same. They gained control, but before any real damage was made, it was in the Wildcats’ possession. This half differed in the quality of gains made towards the goal, however. South Pas’ goalkeeper still would not let Monrovia penetrate the goal box. Plays started to be completed and South Pas started a more aggressive rampage through the field.

Senior Ava Dunville was one teammate who turned up the heat in the back half of the game. She burst through Monrovia’s defenders by sidestepping the midfielders and strikers with impressive footwork, but her attempt at the goalbox fell short as the ball was quickly caught by the goalie. Additionally, junior Annalea Pearson sprinted down the field, taking the run towards the goal solo. But was ultimately subdued by the Monrovia goalie.

Endo took her composed style and brought it up the field as she left the defender area to attempt a break to the goal with a Dubester assist, but, eventually, the ball entered out of bounds.

Another common trend showcased throughout the game was Tigers being run off the field resulting in Monrovia throw-ins. These throw-ins gave Monrovia an opportunity to gain ground, something the Tigers never got the chance to take. By the end of the scoreless second half, the final score tallied to 1-0 for Monrovia.

“It was a little disappointing in the end but I think we put up a good fight. We always struggle a little bit on communication so we can improve on that.” Bluml said, “[I look forward to] win games in the future.”

The Tigers will play their next league game against the La Cañada Spartans on Friday, Jan. 7.