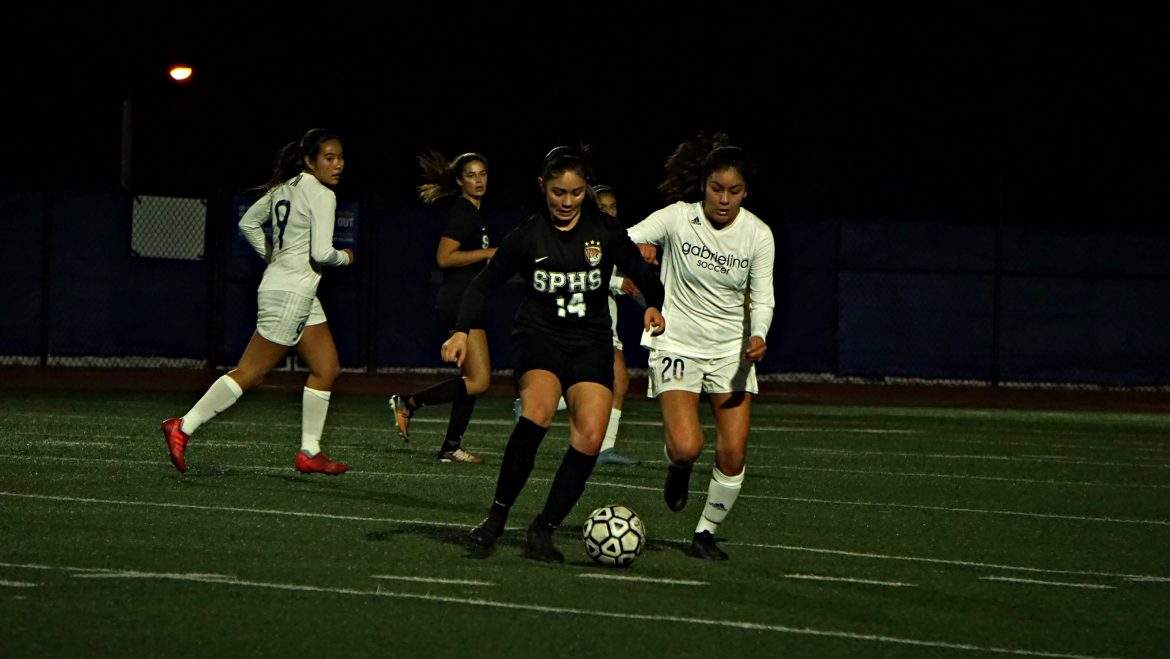 Girls soccer will play its league opener on the road against La Cañada Friday, Jan. 10.

Both teams played an aggressive and fast-paced strategy, using breakaways and set pieces to create dangerous chances. While South Pas came out of the gates energetically, its passing quality diminished in the remainder of the first half. The second half featured fairly equal possession, maintaining the 1-1 result.

The Tigers controlled possession and created chances early by sending balls through the Eagle defense. However, Gabrielino proved dangerous on the counter attack, forcing junior keeper Andrea Zarazua into action, who dove to save a one-on-one breakaway in the fourth minute.

After the initial surge, South Pas weakened considerably and allowed the Eagles to seize control of the game. In the 12th minute, all four defenders sprinted to converge on a rival striker, barely preventing an early deficit.

South Pas eventually succumbed to the Eagles’ pressure when they scored off a corner in the 25th minute. But, the Tigers scored on a corner kick of their own just a minute later. Senior captain Chloe Kim picked out senior Andrea Castellanos, who headed the ball in for her sixth goal of the season.

The Tigers held out against Gabrielino breakaways in large part because of junior Sarah De La O’s impressive speed and last-second clearances, keeping the score 1-1 at the halftime whistle.

The team began the second half much like the first, with high pressure and smart, quick passes. Freshman defender Daniella Lat facilitated Tiger possession with her strong and strategically-placed kicks forward.

On the left side, junior defender Juliana Maniquis-Hernandez won back key balls deep in the Tiger half and weaved her way through Gabrielino to pass play up to senior captain Corey Segal for several scoring opportunities.

After her goal, Gabrielino relentlessly fouled Castellanos, slowing down play in the middle and breaking up the Tiger offense. However, junior Kaylee Wallace made herself a threat by sneaking into open pockets of space and repeatedly chasing down through balls. Possession remained back and forth all the way to the final whistle, with neither team able to eke out a victory.

“[In] the first half we really struggled a lot with making cohesive passes and working as a group,” Zarazua said. “[But] in the second half that trust [between players] showed more and we played more as a group instead of as individuals.”

The Tigers begin their league season against La Cañada on the road on Friday, Jan. 10.