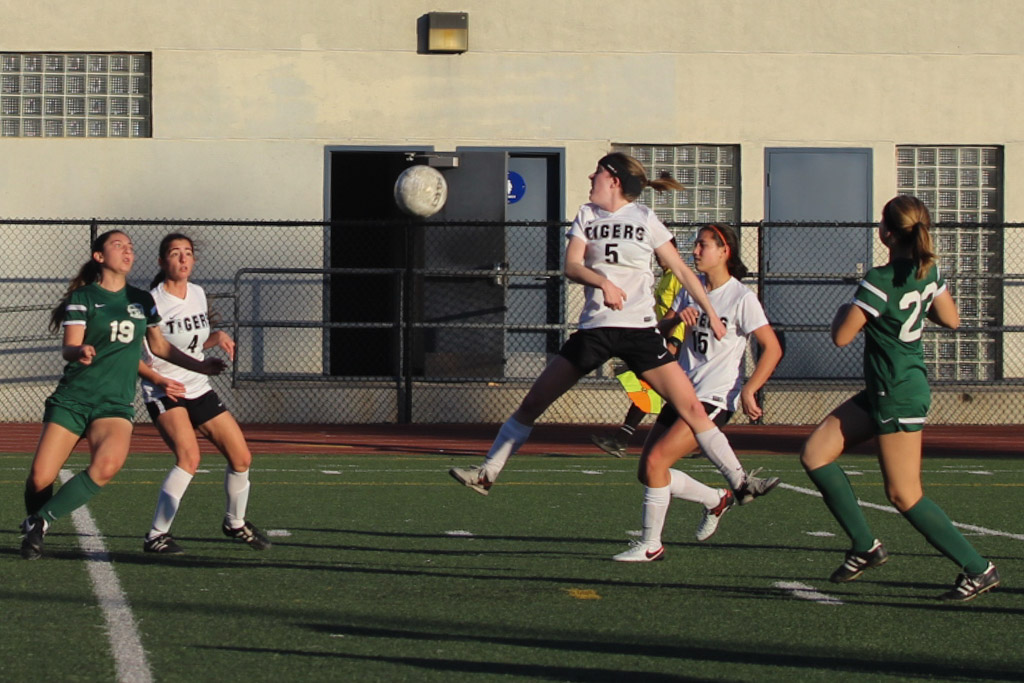 Junior Rainey Tilley goes up for a header. The 3-0 victory against the Wildcats raises the team's record to 4-1 in league play, ahead of its rematch with the San Marino Titans.

The girls’ soccer victory tour carries on as the varsity soccer team shut out the Monrovia Wildcats yet again, 3-0, at home on Friday, January 26. Unlike the similar shutout win against La Cañada the week prior, the Tigers effortlessly dominated during this somewhat sleepy match. This last home game also commemorated the team’s “Senior Night”– a celebration of the players graduating in 2018. A league title is quickly becoming a tangible reality for the Tigers, with an overall season record at 12-1-1 and a league record at 4-1.

The Tigers definitely began the match feeling confident and assured. They had not only won their three previous league matchups, but welcomed back junior defender Booch Barrera who finally recovered from a concussion she suffered in late December. Barrera had performed as a standout player all throughout preseason, and fortunately, her injury has not changed this fact. She showcased this special talent in one especially notable play; instead of simply clearing the ball from Tiger territory when need be, Barrera regularly snatches the ball from opposing forwards and then dribbles and pushes it deep into the other half herself.

Altogether, the Tiger defense was strong; seniors Isabel Bluml and Celeste Amaya were unafraid to get up in Wildcats’ faces to thwart any offensive attempts. Senior co-captain Riley Segal re-affirmed her leadership position– this match found her constantly blocking and punting with her well-known physical prowess. Senior (co-captain) and junior goalkeepers Sophie Reynolds and Noemi Howland, too, were stalwart guardians. Often overlooked because of the juicier action on-field, they are the core reason for South Pas’ past four stainless victories.

On the offensive side, the Tigers brought about one goal in the first half and two goals in the second. Junior forward Uma Hornish, per usual, was a rockstar on Monrovia domain. Taking a long ball from Bluml in the back, Hornish single-handedly secured a beautiful goal, whizzing past the Wildcat keeper and cleanly into the lower left corner of the net.

Midfielders succeeded the scoring mantle later into the match. All season-long, senior midfielder Emily Dunn has been yet another of many extraordinary players with South Pas; her talent lies in her versatility. While attending to all the duties called for by a midfielder, Dunn defends with a fire and scores with elegance. She sent flying a gorgeous shot from the side that struck net. Sophomore midfielder Corey Segal also conforms to this standout criteria, seizing the last yet somewhat messy goal.

At the two-minute mark, the match came to a stirring close. Head-coach Victoria Lathrop made sure to place all eight of the senior players on field, ‘closing their home season the way they started.’ Afterwards, the seniors were gathered and honored for their contribution to the team. For many of them, this final home game marks the conclusion of a four-year high school career.

“Well, [this last home game] feels a little different than usual because it’s not our last game of the season– it’s not as sad– but it definitely went by really fast. There’s a lot of players on this team that I’ve played with for a long time, so it’s weird to be counting down the games. It was exciting to win, and it made the whole night more fun– it’s more of a celebration rather than a sad goodbye,” Reynolds observed. “For San Marino, we are ready. We have Booch back; we’re going to be a totally different team than San Marino saw at the beginning of the season.”

“Coming into the second half of league– it’s a tight race right now. It all comes down about who shows up on game day. As far as we’re concerned, we have to take it one game at a time. We have to finish league before we even look to anything else. We’ll focus now and be prepared for San Marino. Obviously, that’s going to be a big matchup because of that rivalry that exists,” Lathrop commented. “Tonight was fantastic, it’s always a special moment to honor the seniors– with eight of them graduating, they’re leaving some pretty big cleats to fill for next year. The fact that we were able to start all of them and have them all finish together to bookend their season– that’s important.”

Although this may have been the girls’ last home match, they still have a long (and exciting) road ahead of them. The San Marino rematch on Wednesday, January 31 is certainly going to be decisive. Prospects are looking bright for the Tigers; the Titans have recently lost to both La Cañada and Temple City, teams which South Pas have squashed in competition. After that, the Tigers will have two more league matches before an (almost guaranteed) shot at CIF.

Boys’ soccer falters in the second half against Monrovia

Girls’ basketball displays its stellar offense in a win against Monrovia