Boys’ soccer falters in the second half against Monrovia 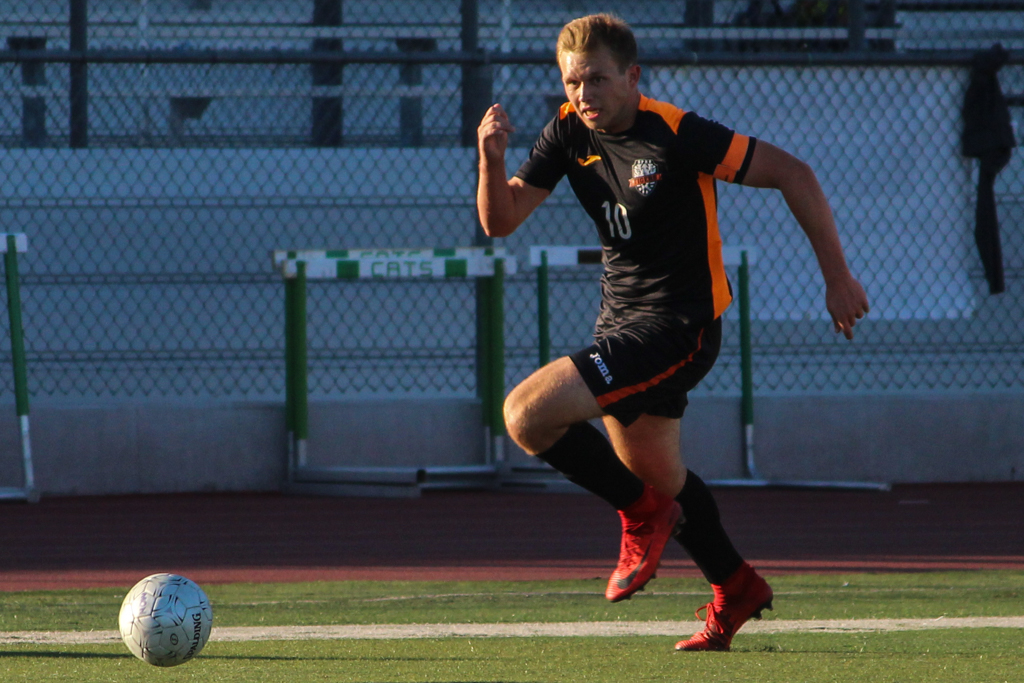 Senior Jack Renken passionately chases the ball into Monrovia territory. Renken scored South Pasadena's only goal of the game, in the 2-1 loss.

The second half comeback attempt fell just short on Friday, January 26, as South Pasadena boys’ soccer was defeated by a score of 2-1 against the Monrovia Wildcats. The second matchup between the Tigers and Wildcats followed the trend of the first game, as the two teams received seven total penalty cards. South Pas and Monrovia have developed an intense rivalry in the team’s two contests this year, demonstrated through chippy and aggressive play.

Both teams struggled to find any offensive rhythm in the scoreless first half. South Pas wasn’t able to create any opportunities on offense, putting the burden on the defense. The defense rose to the occasion, however, preventing the Wildcats from finding the back of the net. Senior goalie Jack Gallagher played well in the first half, making multiple saves. On defense, defensive backs Sage Pierone and Tianho Wei also played a large role in the Tiger’s quality defensive play. Due to the good defense and lackluster offense, the half ended in a 0-0 draw.

Monrovia find its stride early in the second half with a pair of goals, giving them a sizeable advantage. The second goal, which came under questionable circumstances, angered the Tigers, who were finding themselves in an increasingly worsening situation. The rising frustration resulted in fouls from both sides, many of which translated into cards. In one particular five minute period, the teams combined for four yellow cards.

Meanwhile, the offensive woes for South Pas continued in the second half. The Tigers struggled to get the ball deep into Wildcat territory, and when they did, they failed to muster any quality shot attempts. Their only true goal-scoring opportunity came via a penalty kick caused by a Monrovia hand-ball in their own box. Senior Jack Renken took advantage of this rare circumstance, booting the ball into the goal to put South Pas on the scoreboard.

The last few attempts from South Pas in the final 20 minutes amounted to little success, and the Tigers ultimately dropped the contest 2-1. After the loss, South Pas now finds itself outside of the top three in the Rio Hondo League with just four games remaining. Realistically, the team will have to win at least two of those last four to receive a CIF postseason berth.

The Tigers next chance at redemption comes on Wednesday, January 31, when they take on rival San Marino at home. South Pas won the last matchup at San Marino on January 10 by a score of 5-1.

You won’t be sorry at Sari Sari