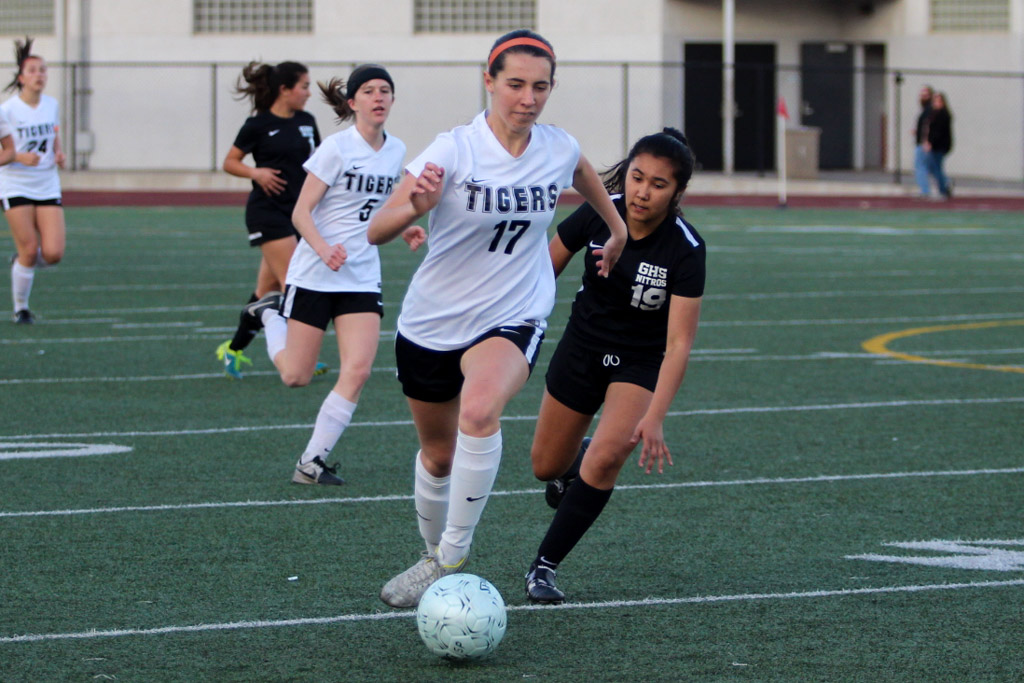 To commence a dominant CIF campaign, the girls’ varsity soccer team captured a 2-0 shutout victory over the Glendale Nitros at its first CIF Southern Section Division V match at home on Thursday, February 15. In their most intense game of the season, the Tigers fought tooth and nail for their win against the aggressive and frenzied Nitros– a glimpse into the level of play in CIF to come. Today’s results places South Pas’ overall record at 17-3-2, an undeniable badge of the Tigers’ success.

Coming into this matchup, both South Pas and Glendale each knew one brutal fact: if they lost, their seasons were over. The very nature of these games bring out both the best and worst in teams, as determination exacerbates the most polished yet oftentimes vicious performances out of the players.

Each and every Tiger on field put forward their most refined showings of the season. Within the first few minutes of play, it was clear that South Pas was the superior team. Yet, the first half was marred by uncompleted scoring opportunities––and even worse, objectively poor referee calls. Immediately, the dependable trio in the midfield––senior, junior, and sophomore midfielders Emily Dunn, Rainey Tilley, and Corey Segal–– demonstrated their passing and shooting dexterity. Dunn supplied some accurate shots with her beautiful kick, while C. Segal charged the goal with her typical carry, juke, and shoot approach. Unfortunately, all attempts were denied by a rather capable Glendale goalie. Junior defender Booch Barrera also contributed a painfully close shot in the mix, as a free kick hit the goal’s top post and down into the box, impossible for referee or player to decipher whether it landed within the lines of the goal before the goalie recovery. 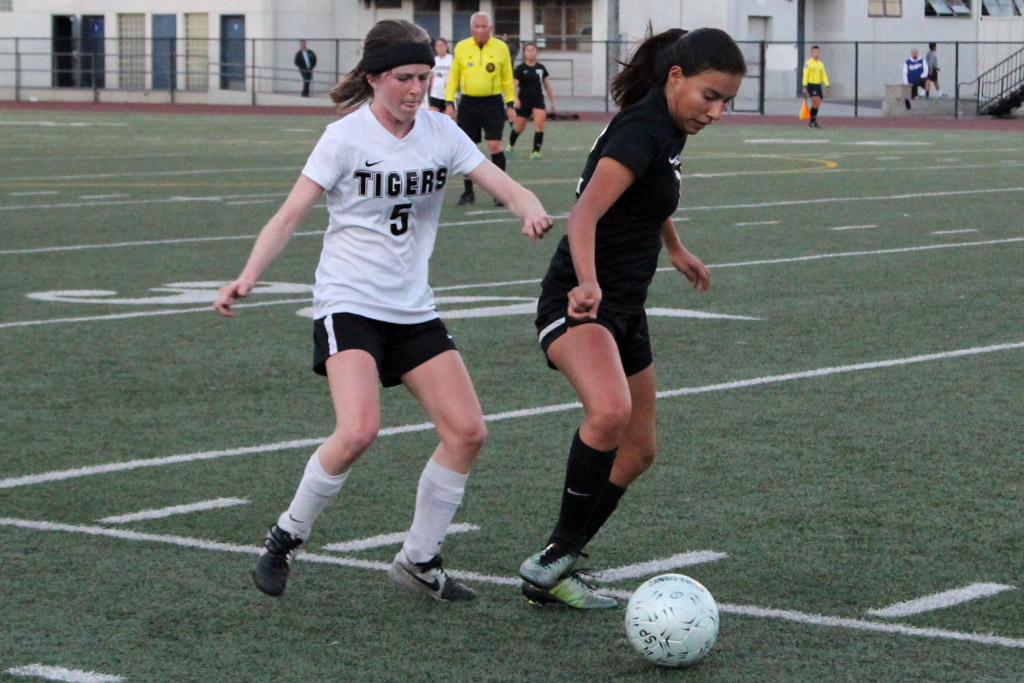 Junior Rainey Tilley tries to steal the ball from a Nitro defender.

South Pas’ greater woes came a later in the half, as one of the Tigers’ potential goals were refused by substandard refereeing. Junior forward Uma Hornish was able to split the last two Glendale defenders, sending a shot extremely similar to Barrera’s into the goal. Yet, unlike the earlier, the ball found itself confidently within the Nitros’ box, corroborated by a photo taken by a sideline reporter. Frustratingly, the referees cited “confusion over the lines” as means to contest the goal, unable to be swayed by photographic evidence due to CIF rules. The half closed with no (observed) goals made by either team– always a dangerous way to end the first half, as it tends to generate desperation in the latter.

Despite the pressure, the Tigers were able to keep their cool diving into the second half. Not long after the whistle blow, Dunn completed a gorgeous shot off an assist from Tilley. While South Pas celebrated a well-deserved goal, Glendale’s second half desperation mutated into furious and hostile resolve. Aggression soon boiled over, as a Glendale player was given a yellow card after a nasty foul. The Nitros responded with a threatening attack, attempting to burst through the Tigers’ backline. Although defenders such as juniors Jade Myer and co-captain AJ Bonk showcased stellar maneuvers for a majority of the match, South Pas’ clean slate ultimately came down to junior goalkeeper Noemi Howland. Howland, equipped with an admirable concentration despite the chaos, made multiple key game-changing saves.

The touch-and-go game came to abrupt standstill when Bonk came into a severe collision with an opposing Nitro; though Bonk eventually emerged unscathed, the Glendale player had sustained a fairly serious injury. The pause gave both teams a chance to regroup and refocus with about 10 minutes left in the match.

Straight after the wait, Bonk accomplished what she had originally set-out to do––single handedly, she seized the Tigers’ second goal on a long but flawless shot.

“I definitely think that, at the beginning of the game, we were dominating. We did get a little tired towards the end, but we managed to keep pushing through. Everyone on the team played with high intensity and excitement––it really encouraged me to keep pushing my hardest,” Bonk commented. “I go on a lot of overlapping runs, and I figured I could just be an opening for forwards. But suddenly, I was given a chance to shoot––I wasn’t expecting to score a goal, but I gave it my best shot and it made it!” 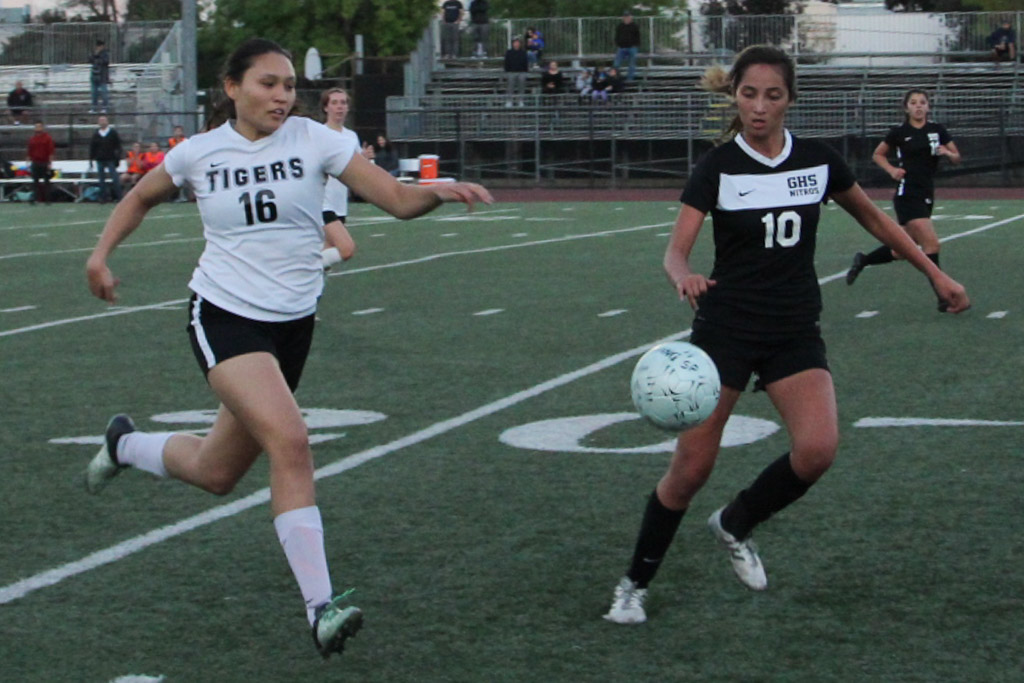 Senior Isabel Bluml tracks down the ball as she approaches a Nitro defender.

Though no additional goals were made by either team, the match concluded in a rather dramatic fashion. Following a yellow card given to a Tiger for a hooked arm, the Nitro goalkeeper made a 40 yard run to yell a string of expletives at the offending Tiger. The referee promptly presented a red card to the keeper, prompting a loud and outspoken reaction from the crowd. South Pas head-coach Victoria Lathrop was then given a yellow card for their behavior, as the coach is held responsible for the conduct of their supporting audience. These chain of events reveals how seriously players take these games at the CIF level and the daunting road that lies ahead for the Tigers.

“Coming into this having none of these kids with postseason experience, it’s hard to explain to them what to expect. I explained every team, from here on out, have that ‘win-to-stay-in’ mentality––it’s what’s driving everyone right now,” head-coach Lathrop observed. “I think this was a really good game to test us, to show us where our weaknesses against teams are. Glendale definitely had the skills to keep up with us throughout the entire match. Although it got a little chippy, I’m proud of the way we played today. It’s unfortunate that there were some cards and injuries in the mix––nobody wants to see that in a game. But, at the same time, that level of intensity is good for us, knowing that we must match that (in a positive way) for our upcoming matches.”

With this initial success under their belt, the Tigers will proceed to the second round of CIF playoffs. South Pas will be facing off the Maranatha Minutemen away on Tuesday, February 20.