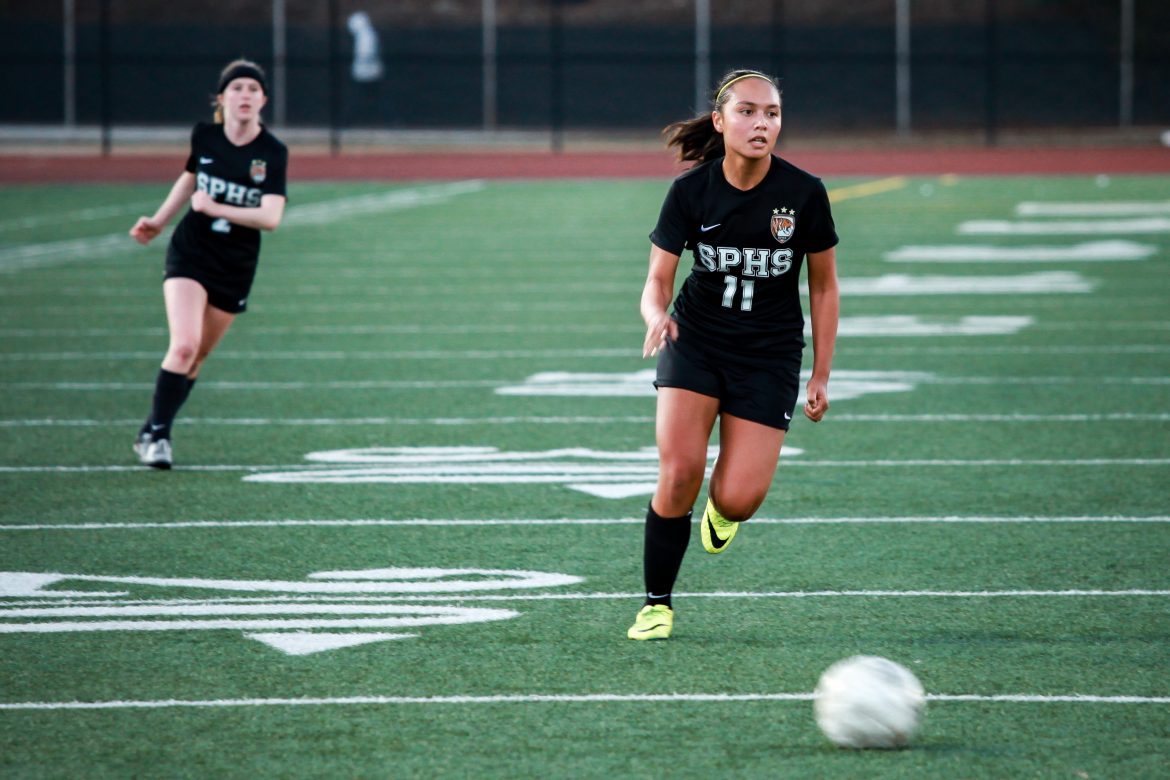 Senior Uma Hornish paced the opportunistic Tigers with two goals in the 6-1 rout.

The girls’ varsity soccer team flew past the outmatched Alhambra Moors on Friday, November 30 in a 6-1 home victory. Bringing momentum from Tuesday’s win, the Tiger’s kept up their strong communication on the field, propelling them to a preseason record of 2-0.

The Moors highly aggressive nature startled the Tigers at the start of the first half, but they quickly adjusted as they managed to grasp most of the possession. Whenever opposition nearly breached the defensive line, senior defenders Emma Barrera and AJ Bonk struck back and fought hard to surge to midfield and the Moor goalbox. Within the first 10 minutes, Barrera captured the ball and charged down the field, passing to senior forward Jenna Neuihed, who then proceeded to shoot the ball through the legs of the goalkeeper. With the score now 1-0, the strong Tiger offense was continuously met with an equally competent Moor goalie. As the Tigers tirelessly peppered the goal, the goalie saved each attempt. That was until senior midfielder Rainey Tilley finally surpassed the seemingly impervious goalie and made an excellent shot from the 20-yard line, boosting morale among the Tigers. This added momentum led to two subsequent goals by senior forward Uma Hornish to finish the first half.

A series of well-orchestrated passes and powerful defensive play allowed for an exciting start to the second half. After continuous passes between the midfield and backline, the team’s offensive strategies began to grow more profound, eventually leading to an exceptional goal from the 30-yard line by junior midfielder Juanita Diaz. The successful offensive attack riled up the Alhambra Moors and they began to play with more intensity. Regardless, the Tigers consistently kept the ball in their possession, conceding only one goal. As the game started to come to a close, both teams seemed to be losing steam. Nonetheless, Barrera was able to finish the match for the Tigers with a sprint straight across the field to score; thus, bringing the Tigers to their 6-1 triumph.

“To come into the first week being 2-0, that’s always a strong start,” head coach Tory Lathrop said. “Overall I’m pleased with how we did. I wish we would’ve scored a few more goals in the second half but it’s one of those matches where you don’t want to blow them out completely. Try to keep it competitive. We talked about building comradery and communication on the field, so I like the fact that they’re being more vocal with each other [even though] I think they can still improve on that.”

The Tigers hope to continue their preseason winning streak in a road game against La Salle on Tuesday, December 4.