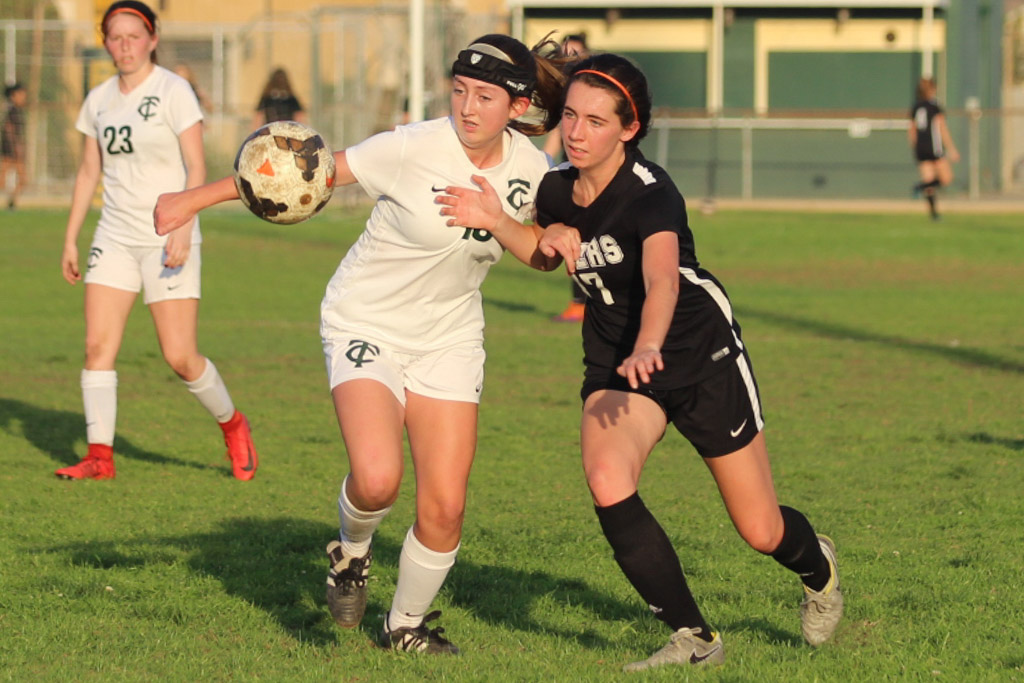 Junior Uma Hornish chases after the ball inside the box. With a 1-0 win over the Rams, the Tigers have secured the Rio Hondo League title.

To close the season, girls’ varsity soccer snatched a final and well-deserved victory, 1-0, over the Temple City Rams at an away match on Tuesday, February 6. Although messy and unorganized, the Tigers were able to muster a goal in the first half to situate themselves a goal ahead of the Rams for the rest of match. Nonetheless, this win is entirely sensational– the Tigers have successfully secured a Rio Hondo league title. South Pas leaves behind a historic overall record at 14-1-2 and a league record at 6-1-1 as they proceed onto the greater arena of CIF. 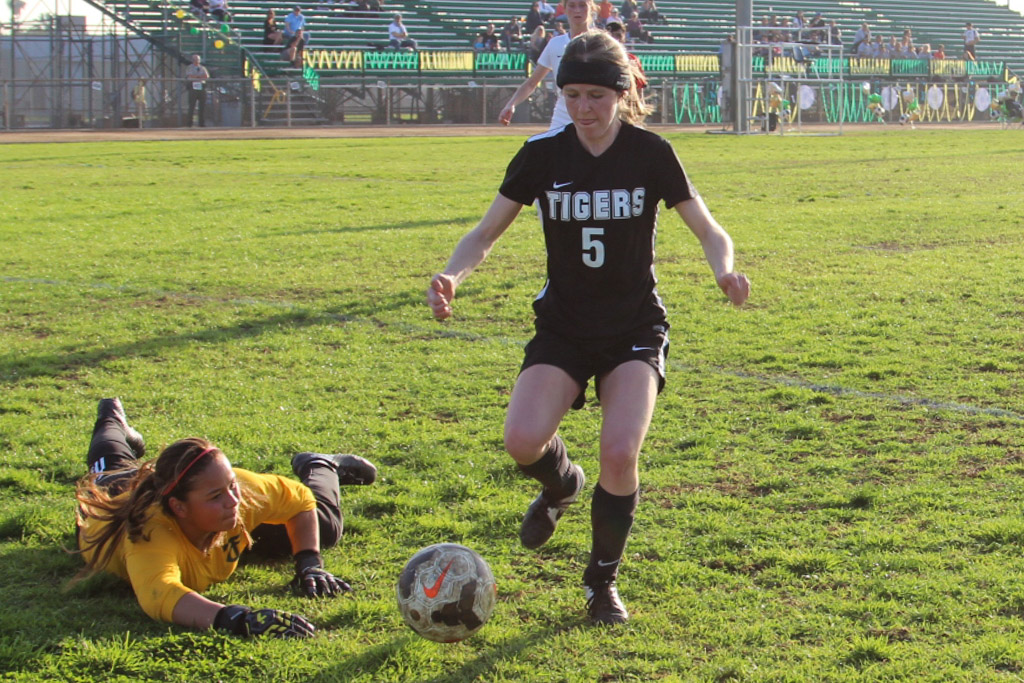 After following the girls’ soccer team through their landmark season, this final matchup was frustrating to watch. Clearly, South Pas was the superior team. Similar to the stalemate with La Cañada last Friday, the girls were constantly a touch too slow on the ball, allowing for a defiant Temple City defense to collect 50/50 balls and protect their net. Still, there were strong players on the frontline that spearheaded the Tiger attacking efforts– junior forward Uma Hornish competed with her typical finesse and senior and junior midfielders Emily Dunn and Rainey Tilley worked tirelessly to retain possession.

The girls’ soccer backline has been a prominent factor behind its recent triumphs; this rang true for a majority of the game. Senior and junior defenders Celeste Amaya and Booch Barrera further asserted their standout defensive performances while junior defenders Jade Myer and co-captain AJ Bonk also participated in vital plays all throughout. Bonk often found herself up to the Ram net, firing many of the near-accurate shots of the match. 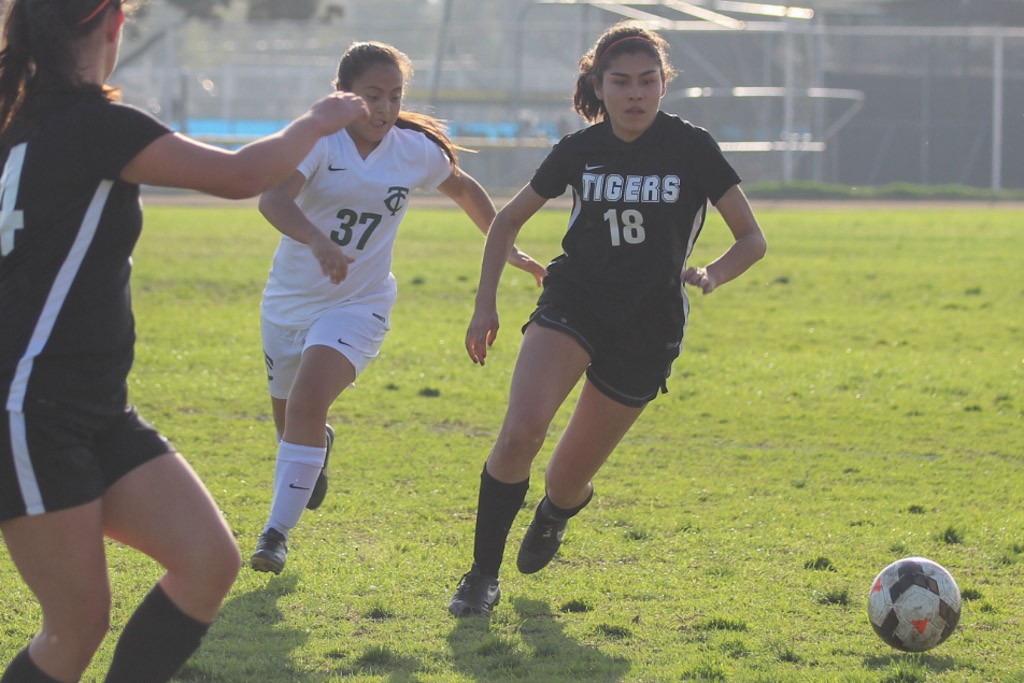 Senior Celeste Amaya advances the ball as she looks for her teammates up ahead.

The first half saw multiple valiant scoring attempts by Hornish, Dunn, and Bonk, though none fruitful. It wasn’t until the final few minutes that Tilley capitalized on an unrecovered goalie rebound, narrowly crossing the ball into the side of the net. The Tigers entered halftime with a slim one-point cushion and would have to defend it for the entirety of the second half.

The second half brought about some impressive performances from some less played forwards– seniors Isabella Gonzalez and Isabel Bluml lunged and stepped their way towards numerous scoring opportunities. Bluml especially, equipped with her height and power, exhibited obvious talent abbreviated by a short stint on field; hopefully, there will be time for her talent to shine in CIF playoffs.

All South Pas endeavors proved futile, as no additional points were gained. Yet, the Rams were adamant on recovering their losing margin, making for an intense last ten minutes of the match. Only moments away from a monument league title, the Tigers became panic-stricken and distraught. South Pas’ composure deteriorated as Temple City made many serious threats to goal. The lone member on the field keeping a quiet and determined cool was the exceptional senior co-captain and goalkeeper Sophie Reynolds. Save upon crucial save was made by Reynolds leading up to the closing minute of the game. Standing in fearful suspense, the entirety of the girls’ varsity soccer team and coaches watched as an awry Temple City shot flew past the Tigers’ final defenders and bounced off of Reynolds’ outstretched hands. Seeing the ball roll away, Reynolds pounced again and protected the ball, as well as South Pas’ victory and title.

“Winning league title feels absolutely amazing. It has been four really long years– three years of not coming close at all,” Reynolds enthusiastically commented. “It still feels surreal. But, we didn’t come in holding our breath– we came in this year knowing this was our year, and it feels so good to say it without any hesitations. We are league champions. It’s been the dream for all of us– and now it’s real.”

“I am ecstatic. Since I came in last year, we talked about finishing in the top three, and this year, narrowing down to the top two, so finishing first is just icing on top of the cake. We wanted it for the seniors, we wanted it for the opportunity to go into post-season– which we missed by a hair last year,” head-coach Victoria Lathrop said. “From here on out, it’s about taking it one game at a time. I’m stoked, I’m excited for what’s to come.”

For many, many years, the South Pasadena Girls’ Varsity Soccer program subsisted in relative mediocrity– in these past three seasons, the Tigers could not even capture a CIF berth. Yet, this 2017-2018 season, these girls have elevated an unexceptional team into one of splendor and dignity.

Throughout the course of 17 non-tournament games, South Pas allowed only one loss and two ties. Even more striking is the single goal conceded by the Tigers during these games, a testament to the greatness of the Tigers’ defense and goalkeepers. The Tigers do not enter CIF playoffs as weak and forgettable underdogs; in all of CIF Southern Section Division V, South Pas is ranked among the top three contenders to place first. This is the ultimate culmination of all the years the Tigers have played with one another– many of them competing with each other from their days in elementary school– and fresh leadership under Coach Lathrop. If the girls continue to maintain their strong sense of teamwork and unity, they will undoubtedly establish themselves as South Pasadena legends. CIF playoff brackets will be released on Monday, February 12 at 10:00 AM.