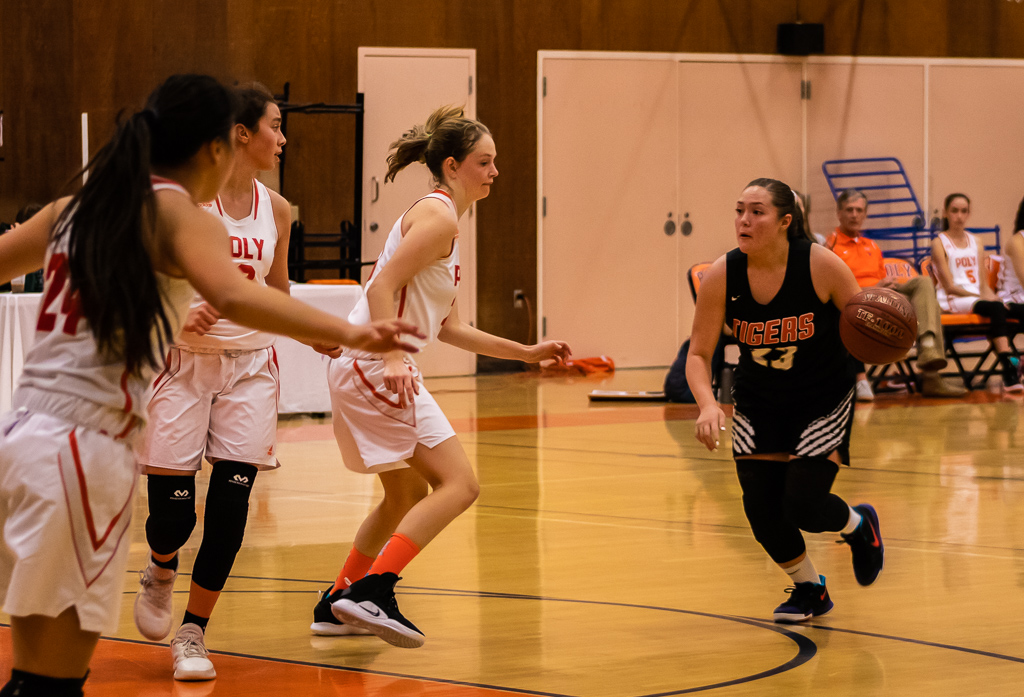 Junior Charlize Kruzic drives to the basket in search of an open teammate.

The girls’ basketball team suffered a narrow 37-32 loss in an away game against the Polytechnic Panthers on Wednesday, November 28. Although the Tigers were evenly matched with Poly offensively and defensively for the majority of the game, they were eventually edged out by the Panthers’ strong offensive play.

Both teams struggled to make shots early in the game, the ball traveling up and down the court with several shot attempts failing to score. Junior Megan Yee provided the first spark for the Tigers, sinking a three-pointer halfway through the first quarter. After a timeout called by Poly, players on both sides became much more aggressive, causing the Panthers to pick up two points from free throws. South Pas and Poly fought aggressively for ball possession and traded baskets throughout the quarter, with junior Emily Newhall, senior Lauren Kafkaloff, and Yee scoring to close out the first quarter with a close score of 10-9.

The fast pace of the game and consistent point trade-offs between the teams persisted throughout the second and third quarters, with both teams unable to land many of their shot attempts. However, by the end of the second quarter, the constant attacks by the Panther offense was beginning to wear down the Tigers defense. The efforts of seniors Elaine Yang and Kayla Zhang, combined with consistent scoring from Kafkaloff and Yee, were not enough to stop the Panthers from gaining a 31-23 lead by the end of the third quarter.

The Tigers went into the fourth quarter ready to fight to close the gap that the Panthers had created. The South Pas defense stalled the Panthers long enough for Yee and Kafkaloff to bring the eight point deficit down to three; the score sat at 35-32 with two and a half minutes remaining on the clock. After the Panthers scored two more free throws, the Tigers could not regain enough momentum to overcome the Panther defense, losing 37-32.

“We fixed a lot of mistakes from our previous games when we were playing today,” said Kafkaloff. “We had a bit of trouble today, but we always start off a bit slow and end up finishing strong.”

The Tigers will be looking to redeem themselves on Monday, December 4 at home against the Cajon Cowboys.

Girls’ soccer dominates Gabrielino in first game of the season