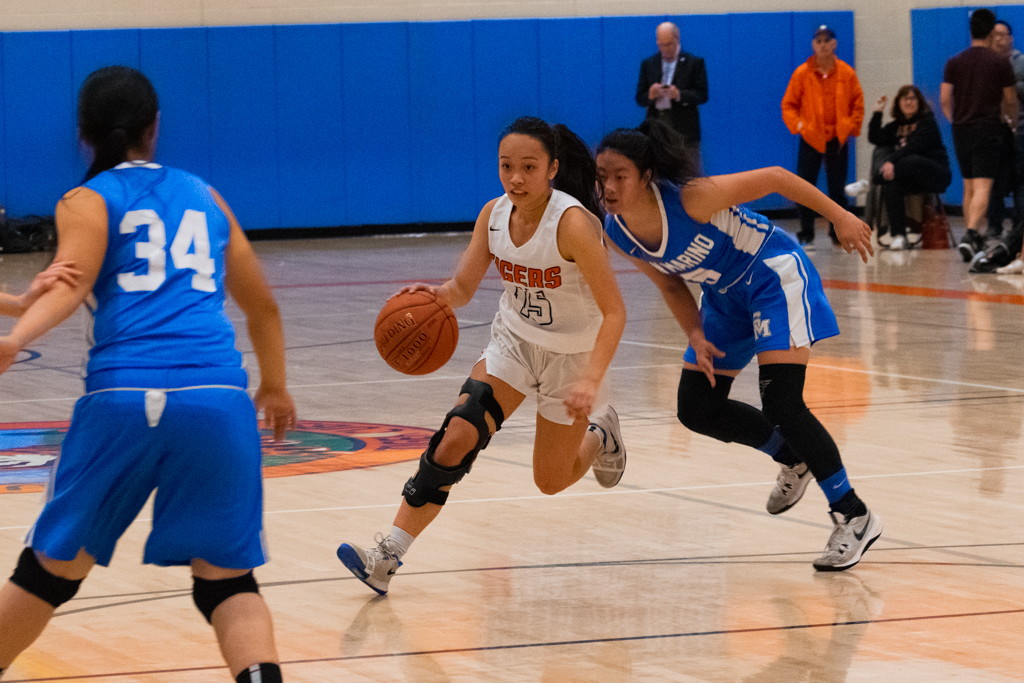 The Tigers completely dominated both ends of the floor Wednesday night. South Pas practically secured the victory in the first half, walking into the break with a 22-point lead and finishing with a 34-point win.

The Tigers excelled offensively from the get-go with their clear height advantage, stellar passing, and excellent team communication. Furthermore, sophomore Allysan Tse forced San Marino to commit many sloppy turnovers; the Titans simply could not keep up with the Tigers’ defensive frenzy.

Tse led the team offensively, racing down the courts unfatigued and by the end of the first quarter, the South Pas jumped ahead, 19-5.

In the second period, senior Charis Au flashed outstanding handles that helped secure the Tiger lead even further. A series of consecutive layups from seniors Aiko Sudijono and Gianna Beasley and a swish three pointer from sophomore Alyssa Chan embarrassed San Marino’s inability to score outside of free throws.

Turnovers crippled San Marino and when the Titans did find a shot opportunity, they misfired and Tse flew across the court to collect the boards. Towards the end of the quarter, San Marino began to find an offensive rhythm, and a last minute layup put the score at 40-18 for quarter two.

San Marino began the third with the same aggression it began at the end of the last quarter. The team cleaned up its passing and execution, however South Pas responded right back with even more power.

San Marino began to regress, committing more turnovers and playing lazy defense, whereas South Pas continued to play as a cohesive unit. Another three pointer from Chan secured the score at 48-26 by the end of the quarter.

San Marino’s persisting fatigue and low morale defined the fourth quarter. On the other hand, the Tigers easily maintained their offense, and continued to destroy the Titans.

“It was a great, high energy game where we all played with intensity and as a cohesive unit,” Chan said. “In the end we were able to pull away with the win.”

The team is set to compete against Blair on Friday, Jan. 24.