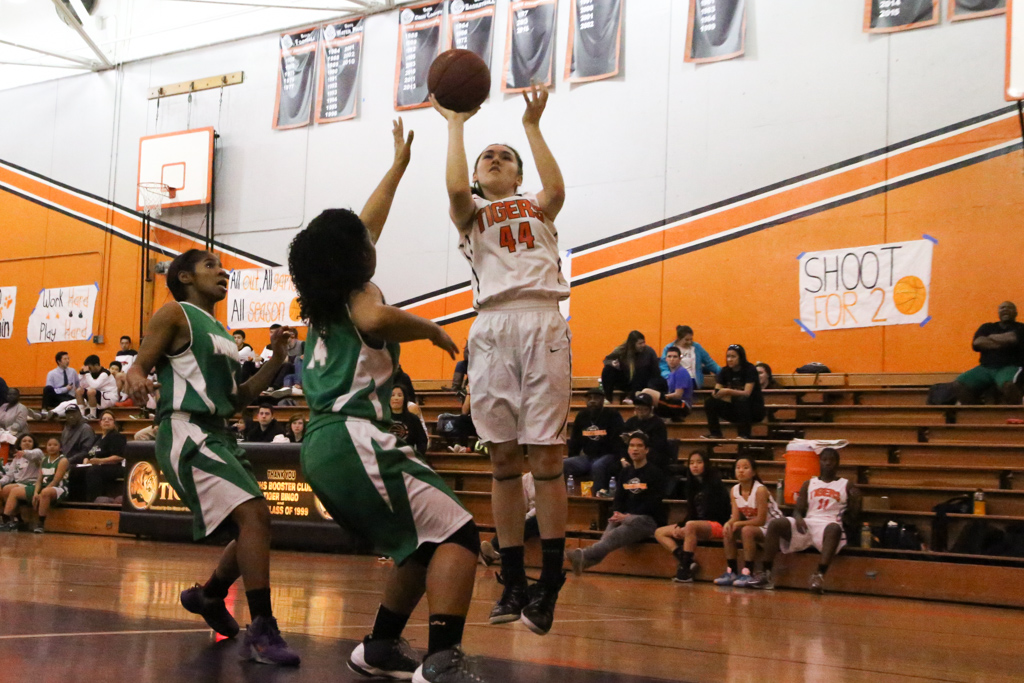 The girls’ varsity basketball team triumphed over the Monrovia Wildcats today at home by a score of 62-57. Although junior Jade Lin was still sidelined due to injury, the Tigers clinched the victory by focusing on grabbing offensive rebounds and forcing turnovers. The win puts the team at 4-1 in league and 10-5 overall.

Monrovia was aggressive right from the start of the match: a Wildcat guard drove past the South Pas defense and drew first blood on a layup. The Tigers, stunned by such a quick attack, committed a turnover which led to another Wildcat basket. South Pasadena head coach Tammy Lai called a timeout one minute and a half into the game to regather the players. After the break, the Tigers found their offensive rhythm, knocking down back-to-back three pointers. The home team continued the effort through staying diligent on defensive pressure; the Tigers regained their poise against an early deficit to conclude the first period with a five-point edge at 16-11.

Senior Kristen Kafkaloff carried the momentum from the strong first quarter finish into the second, knocking down a high-arching three pointer from the corner. The Tigers’ strong performance did not end with K. Kafkaloff as her younger sister freshman Lauren Kafkaloff and sophomores Tiffany Holmes and Kiana Reynolds showcased tenacity in getting boards on both ends. With such stout effort, South Pasadena established an advantage of more than double the Monrovia’s points at 38-17 by the end of the first half.

After ten minutes of halftime break, the Monrovia Wildcats seemed to have bounced back from mediocre first two quarters as they sliced the 21 point deficit to 12. The visiting team took advantage of the Tigers’ frequent sloppy passes and turned forced turnovers into fastbreak points. The Tigers were on the verge of letting Monrovia swing the momentum in its favor; however, junior Juliana Tom responded with multiple three pointers to maintain the double-digit lead. South Pasadena was up 52-38 heading into the final eight minutes of the match.

The Wildcats expanded upon strong outing in the third quarter during crunch time. They knocked down key three pointers and completed and-one plays to creep even closer while the Tigers could not shake off of the passing woes from miscommunication. Monrovia went on a 6-2 run to close the gap to single-digits at 54-46. With a little less than three minutes left on the clock and with Monrovia gradually cutting down the deficit, the Tigers took a break for discussion on preventing a successful Monrovia comeback. The home team resorted to using the most of its given 35 seconds in each possession until the end of regulation to safely clinch the 62-57 win.

“We were able to communicate well in defense to force turnovers and eventually build up a large lead,” junior Jalynne Li said. “However, we got too caught up in trying to create even a bigger edge and rushed our passing on offense.”

The Tigers look to carry on their three league game win streak against the rival San Marino Titans on Friday, January 29 at home. The victory will put South Pas at 5-1 in league and 11-5 overall.

Wrestling falls to Monrovia in return to league play