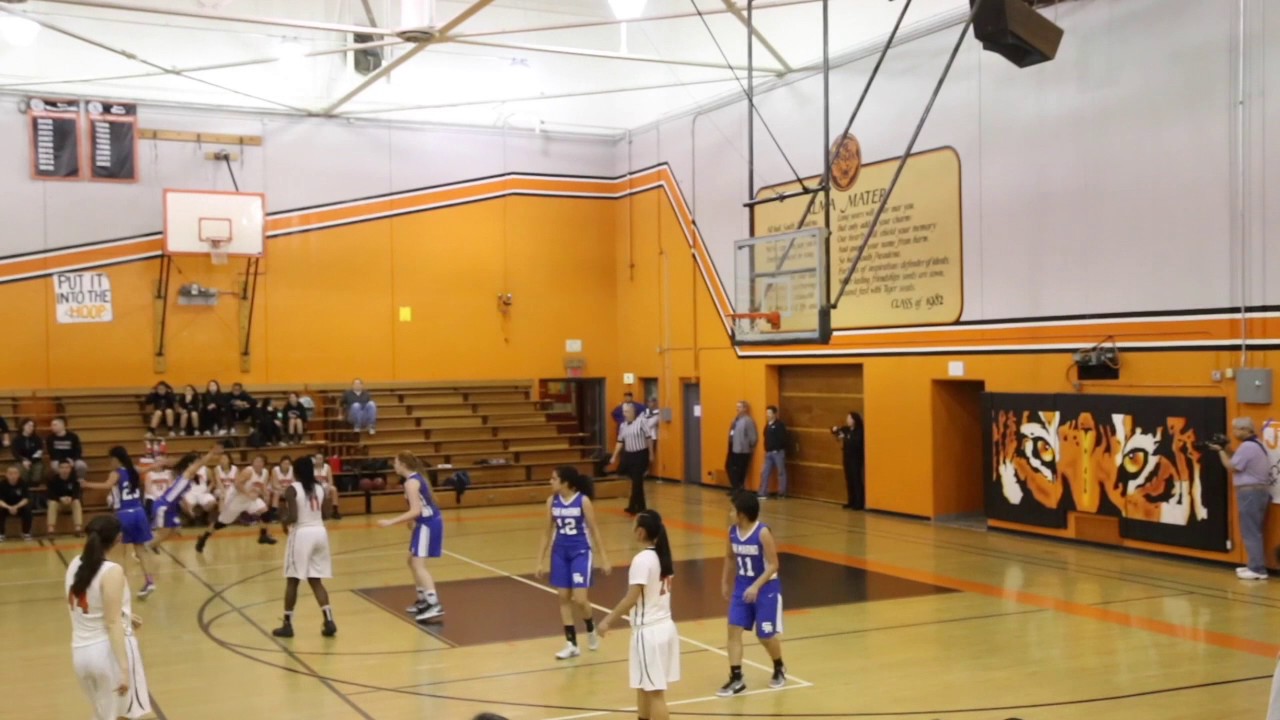 Girls’ varsity basketball defeated the San Marino Titans 61-50 in the teams’ rivalry matchup at South Pas’ gym on Wednesday, January 18. This triumph brings the Tigers’ league record to 3-0 and overall record to 9-6. After a slow start in the first half, the girls managed to find their rhythm and dominate for the remainder of the game.

South Pas immediately gained control of the ball, but the Titans quickly forced a turnover to have the first shot of the game. However, it did not fall, allowing the Tigers to take the rebound and score off of a basket from senior captain Jalynne Li to put the score at 2-0. San Marino took possession and weaved its way through the Tiger defense. Luckily, none of the opposing team’s shots went in, and senior captain Juliana Tom added two more points on the scoreboard. A Titan responded with a three pointer, though the Tigers soon took a 9-3 lead with strong plays from junior and senior captains Tiffany Holmes and Jade Lin. As the first quarter wound down, San Marino tallied up two consecutive free throws before Li gave South Pas a slight lead by sinking two free throws. The quarter finished with the Titans trailing 11-9.

San Marino passed and dribbled around the South Pas defense early in the second quarter until sophomore Lauren Kafkaloff blocked a pass. However, the visitors swiftly regained possession and knocked down a three to give them a one point advantage. The remainder of the quarter followed in a similar fashion, with both teams staying within a couple points of each other. While the Tigers managed to take several shots throughout the entire game, a majority of them did not fall. South Pas also struggled defensively in the first half, though the Titans could not capitalize on a majority of their opportunities. The home team inched forward to earn the lead, which was solidified by a basket from sophomore Flannery Clark. However, a San Marino player scored a three pointer at the buzzer and the teams exited the half at 23-23.

Neither team could find the basket at the beginning of the third quarter, with several missed shots from both teams. The momentum of the game soon swung in the Tigers’ favor, as Kafkaloff muscled through the Titan defense to put the Tigers up 25-23. South Pas had a significantly higher number of opportunities, and allowed San Marino fewer chances to score. The Tigers’ lead gradually grew as they limited the opposition to only three points that quarter. Holmes garnered the final point of the third with a layup to put the score at 41-26, the lead a testament to South Pas’ newfound energy and dominance.

The fourth quarter soon gave way to a Tiger foul off a blocked shot, and the Titan player easily sank her two free throws. Once San Marino reclaimed the ball, a quick steal from Tom led to a tight pass to Holmes, who attempted a shot. Though it missed, Kafkaloff followed up with a layup. San Marino, frustrated at seeing the once-close game go out of its favor, began to commit more fouls. The Tigers took advantage of the given free throws to propel their lead forward. Kafkaloff scored a final basket to put the score at 57-41 before all those on the court were subbed out. Once the bench players were put in, San Marino attempted an onslaught of drives to the basket. However, the South Pas subs held their own with points from sophomore Kayla Zhang and freshman Annika Johnson. Although the Titans added seven more points to the scoreboard, it was not enough to be within range of a comeback. A final San Marino basket swished through the net right as the buzzer rang out to end the game at 61-50.

“We didn’t play to our full potential during the first half, but once we came together during halftime, we were able to push through our slump and gain the lead,” Tom said. “We underestimated San Marino going into the game, but thankfully we were able to come out with the win.”

The girls next square off against Blair on Friday, January 20 at the Vikings’ home. In previous years, Blair has proved to be an easy victory for the Tigers.