Girls’ basketball knocks off San Marino in its season opener 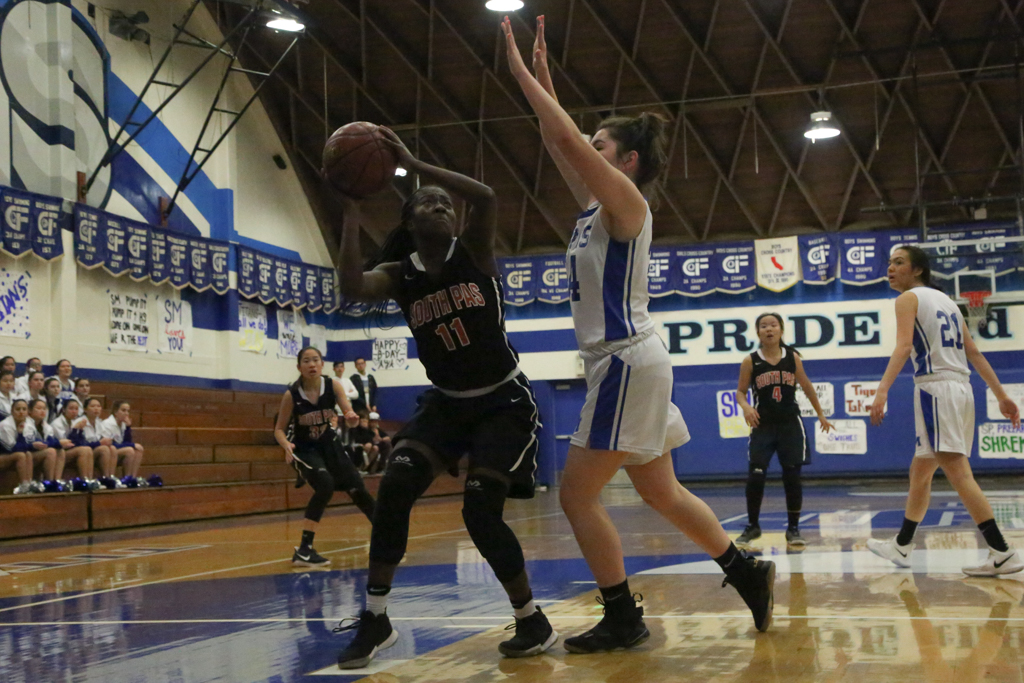 Tiffany Holmes prepares to shoot over her opponent, Audrey Bain. Holmes added an essential element of strength in the paint, as the Tigers utilized physical play in their win.

Girls’ basketball defeated its arch rival San Marino, 44-28, on Wednesday, January 10, at the San Marino High School gym. The Tigers and the Titans both played hard, but ultimately the superior skill of the Tigers led them to victory. The intense competition led to a lot of physicality, as many fouls were called. With the body-on-body aggression, no points came easy, as many other players had to change their typical skill sets in order to score.

The first quarter of the game was slow-paced, and South Pas controlled the time of possession. As tensions heightened, however, the fervor that would be seen the remainder of the game took control. With the stakes raised in its first league game, the Tigers made many small passing errors under the pressure of playing in San Marino. The Tigers’ saving grace for these askew balls was junior Kayla Zhang, who served as the team’s retriever and helped retain possession of the ball. The first quarter also served to develop Tiger strategy. While on defense, South Pasadena would often leave a player at mid-court to keep its fast break offense ready. The usage of this positioning led sophomore Megan Yee to many breakways that helped the Tigers’ pad their lead. Both teams lacked in three pointers, in terms of both shots attempted and shots made. While South Pas normally relies on sophomore Charlize Kruzic for its points beyond the arch, she was only able to deliver two baskets throughout the entirety of the game. The first quarter concluded with a slim South Pas lead, at 9-8. 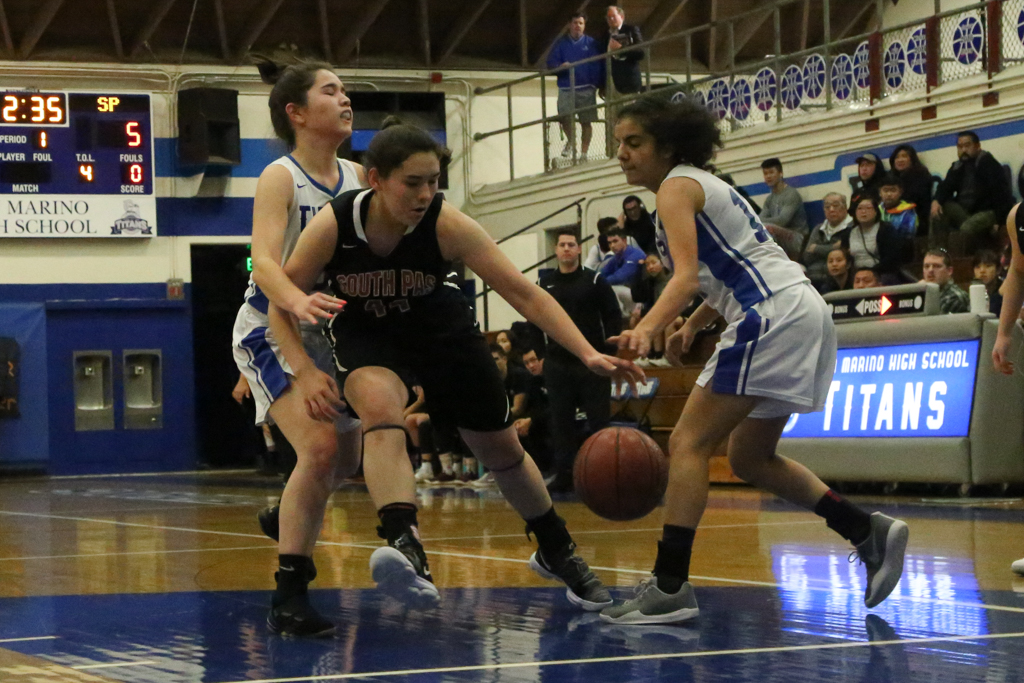 San Marino came into the second quarter applying constant pressure on South Pasadena, but the Tigers’ superior ball skills and communication helped them surpass this hinderance. The physicality of the game did have an effect on senior Naomi Kruzic, however. Kruzic was like a human penguin – constantly sliding on the ground as a result of a collision with another player. The competitive atmosphere and fouls resulted in many free throws, only adding to South Pasadena’s increasing score. The third quarter of the game concluded with San Marino only having scored four points and South Pas scoring ten, bringing the score to 19-12, Tigers.

The second half was started off strong with an increase in communication among South Pasadena players. They seamlessly passed around their opponents and made numerous easy baskets. In any opportunity where the initial shot was missed, the Tigers jumped on the ball and controlled the vast majority of rebounds. Junior Flannery Clark remained a constant force, as she hustled for balls, often turning turnovers into points. The third quarter ended 28-18, giving the Tigers ten points over the Titans.

The Tigers will face the Monrovia Wildcats next at a home game at the South Pasadena High School gym on Friday, January 12.