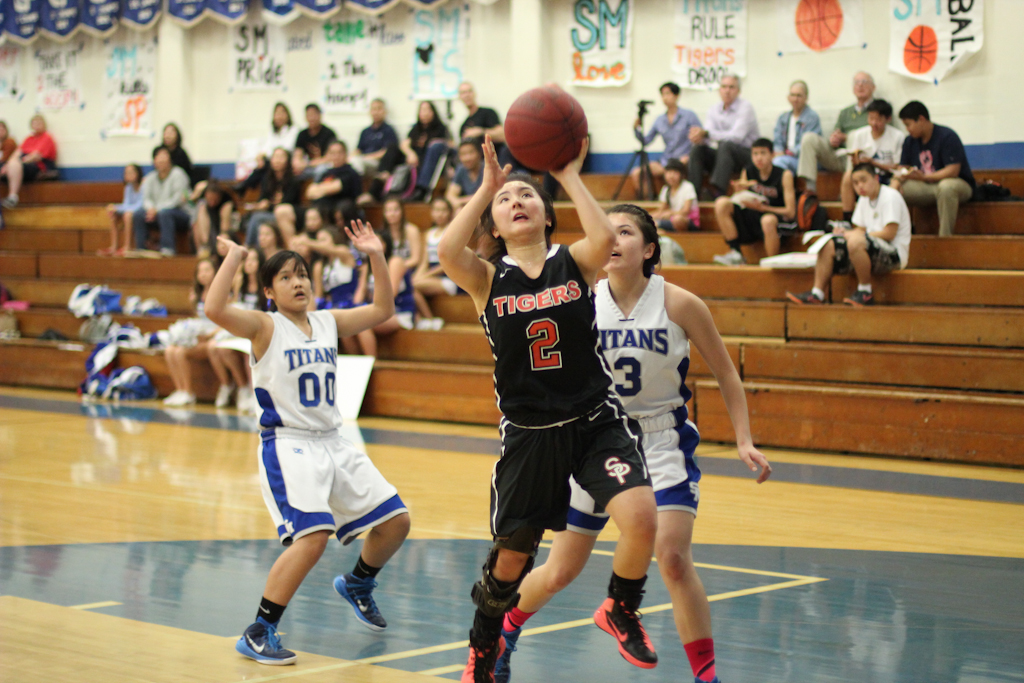 Fueled by the sight of triumph, South Pas started out strong with two points, managed by senior point guard Lexie Scholtz. She was followed shortly after by teammate senior guard Elise Takahama, giving South Pasadena three more points. The Tigers were able to push the score up to a comfortable 18-5 lead with Takahama weaving through the defence for two more points to end the first quarter.

San Marino started to plant their feet and receive multiple stops in the second quarter until Takahama fired up the team with two points. From there, the Tigers were able to get into a groove until Titan small forward Lauren Takeyama converted two points to keep the San Marino spirit alive. Although the Titan home crowd came out in numbers, it wasn’t enough to help the 30-11 lead the Tigers took in the first half.

Both teams went at it in the third quarter, with neither side able to connect to the hoop until senior center Sophia Hathaway earned three points, after being fouled to get the team’s energy up. The girls regained their momentum and started pummeling the hoop. Realizing the lopsided game, San Marino Coach Kenneth Fisher took out the remaining starters with 1:13 left in the game, solidifying a 66-30 victory to end South Pasadena’s record breaking season.

“The girls basketball team hasn’t won a title since 1999 and we’ve been working really hard this season so we’re really glad to finally get that title,” Kafkaloff said.

Earlier this season, they twice broke the all-time school record for most threes in a game,with 12 against both Flintridge Prep on December 15 and 12 again against Canyon on December 18. The previous record was 11, set in 2006.

“After starring at the league championship banner in the gym for four years, it feels a little unreal to finally be able to put 2015 up there,” Takahama said. “Hopefully we’ll be able to use this energy as we continue into CIF.

The girls will find out their first debut CIF game matchup on Sunday, February 15.