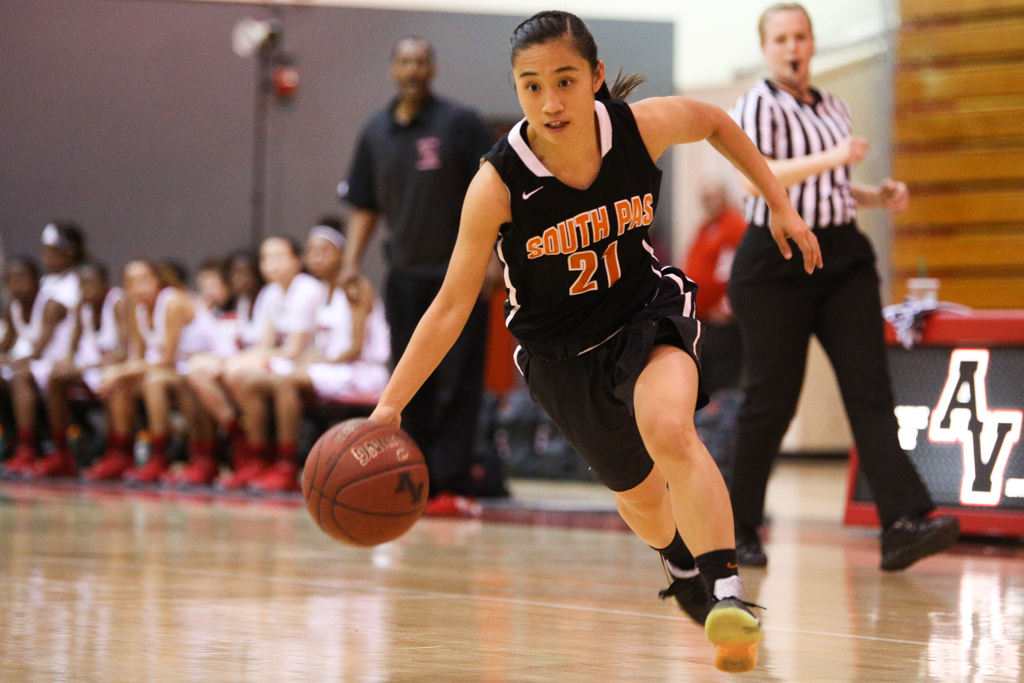 The girls’ basketball team ended its CIF run in a 62-45 loss to Antelope Valley on Wednesday, February 24. The away loss concludes the Tigers’ season with an overall record of 16-7. Though South Pas was one point down at halftime, the Lady Lopes ultimately took the momentum in the second half to earn the win with a significant lead.

Antelope Valley opened with a three, and quickly gained a seven point lead before junior Juliana Tom knocked down a three of her own. The Tigers were at a significant height disadvantage as all of the Lady Lopes were taller than the South Pas squad. While senior Kristen Kafkaloff and freshman Lauren Kafkaloff scored many baskets to attempt to catch up to the Lady Lopes, Antelope Valley managed to maintain its lead. However, a layup from Tom put the Tigers one point behind the Lady Lopes at 17-18 at the end of the first quarter.

Antelope Valley immediately stole the ball to strike South Pas with a quick layup. K. Kafkaloff soon retaliated with a three to tie the score at 20-20. The Lady Lopes again stretched their lead, using their height to easily maneuver around the Tiger defenders’ outstretched arms. South Pas managed to bring the scores within a point of each other, down 30-31 at the end of the first half.

The Tigers managed to briefly gain a one point lead over the Lady Lopes after a K. Kafkaloff layup. However, there was a shift in momentum in Antelope Valley’s favor, going on a 12-0 run before K. Kafkaloff put up another layup for South Pas. The Lady Lopes continued to find the basket, using their height to their advantage. The Tigers were unable to score any more points in the third quarter, which ended at 50-36 in Antelope Valley’s favor.

The Lady Lopes immediately scored a basket at the beginning of the quarter. K. Kafkaloff and junior Jalynne Li scored two early baskets, but the Tigers were unable to find the net for a majority of the remainder of the quarter. Antelope Valley continued to dominate South Pas, often preventing the Tigers from breaking through offensively. Sophomore Tiffany Holmes fouled out before K. Kafkaloff garnered the final Tiger points on a layup off of a loose ball. Antelope Valley concluded the game by running out the clock to finish at a score of 62-45.

Despite this loss, the Tigers are confident that they will continue to find success in the upcoming season, as South Pas is only losing one senior. The squad is proud of its performance, earning second place in Rio Hondo and having an impressive CIF run. While the loss is rough, the Tigers are positively looking towards the future.