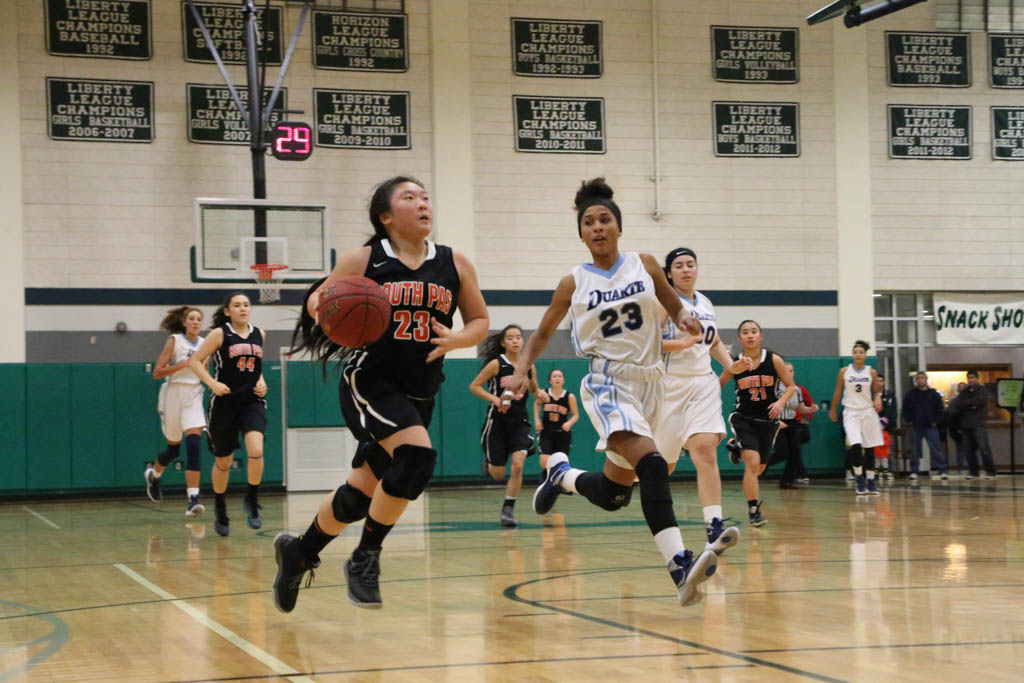 The girls’ varsity basketball team fell to the Duarte Falcons 51- 64 on Saturday, January 9 while participating in the Providence Pioneer Showcase based at Providence High School. This loss brings the Tigers’ record to 6-4 before the beginning of league.

Junior Jade Lin earned the first points of the match, though the South Pas’ speed of play was slow and many of its shots weren’t falling. The Falcons were able to capitalize on the Tigers’ lack of communication with multiple screens, and South Pas’ defense being unable to stop Duarte point guard MacKenzie Barnes’ constant drives to the basket. However, the Tigers managed to pick up the tempo by the second quarter, and senior Kristen Kafkaloff and junior Juliana Tom brought up the Tigers’ score to end the half with Duarte up 22-32.

South Pas attempted to remain within close reach of the Falcons as the teams entered the second half. The Tigers suffered from cold shooting and a major decrease in speed, but managed to only be down by 11 points at the end of the third quarter. Duarte took advantage of the Tigers’ decreased level of play, and within the first three minutes of the fourth quarter the Falcons racked up a 20 point lead, prompting the coach to put in his second string players. South Pas also pulled Kafkaloff, junior Jalynne Li, and sophomore Tiffany Holmes off the court during the last minutes of the game. Lin and Tom did their best to secure baskets to  lessen the Tiger’ deficit of points, and were able to close the gap to be down by 13, ending the match at 51-64. Tom would be awarded Player of the Game for the South Pas.

“Even though we were slow this game, I think we’re very capable of playing up to our full potential, and are definitely up to the challenge for our first league game against San Marino,” said Li.
This concludes the Tigers’ preseason, and the squad next faces San Marino for its first Rio Hondo League matchup on the road on Wednesday, January 13 at 5:15 p.m. South Pas previously showcased a 2-0 performance against the rival Titans in the season series.