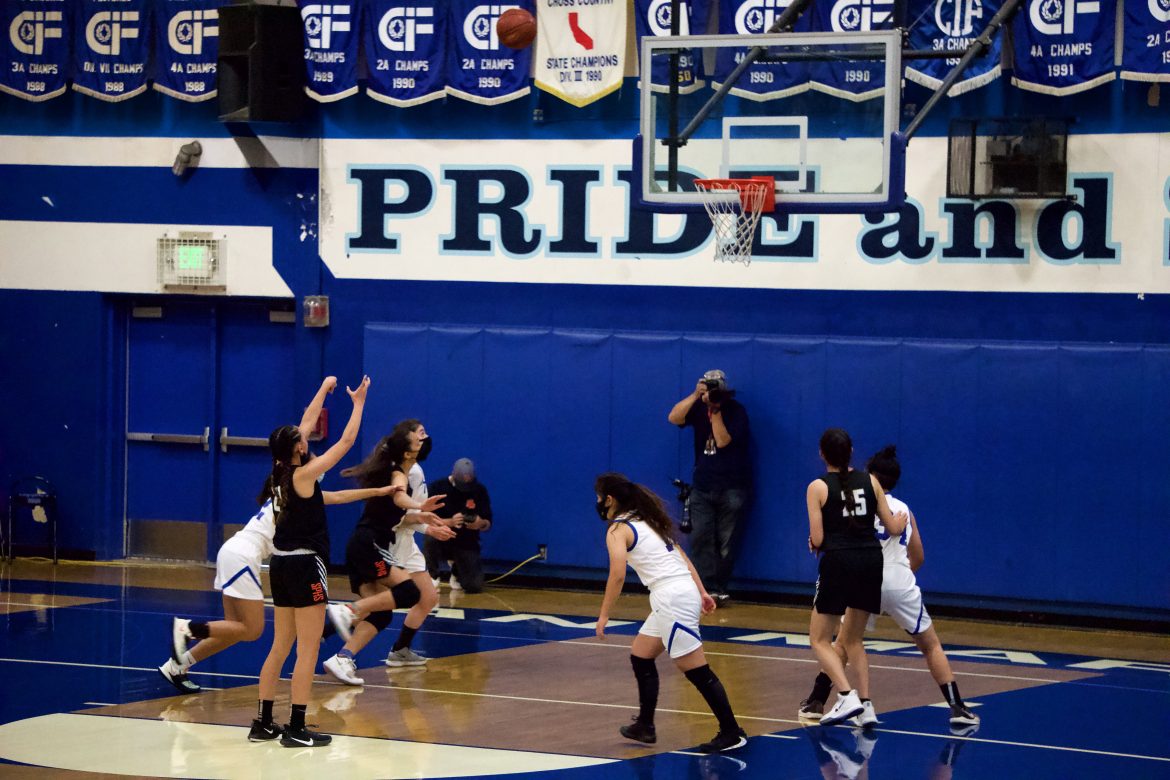 After holding the lead throughout the first half of the match the Tigers maintained their strong offense and went on to defeat the Nitros 39-37.

Girls basketball defeated Glendale Nitros, 39-37, on Tuesday, April 27. The Tigers leap up to an even 3-3 on the season.

Freshman guard Dylan Tse (D. Tse) poured in 24 points, including 12 in the third quarter, to give the Tigers a comfortable lead for most of the way. Despite a cold fourth quarter, South Pas was able to stop Glendale just enough to win by two points.

Glendale began the game with a rainbow triple, but that would be their only bucket of the quarter. Led by junior forwards Alyssa Chan (A. Tse) and Allysan Tse, the South Pas zone was swarming, constantly disrupting passing lanes; the aggressive defense resulted in easy buckets for D. Tse, who scored seven in the period.

The Tigers jumped out to an 11-3 lead, courtesy of freshman guard Jamie Kim, who threw in another triple at the quarter’s end.

In the second, another successful D. Tse bucket opened up the driving lanes, allowing junior guard Isabella Alfonso and senior guard Jenna Okohira to put in some work inside.

Meanwhile, the Nitros looked lost on both ends. Offensively, they threw telegraphed passes left and right, and defensively, they couldn’t secure rebounds and the Tigers took advantage of second and third chance opportunities.

The third quarter began with South Pas on top, 21-14, but Glendale seemed to finally gain some traction. The Nitros made a wide-open layup, forced a jump ball, and drove in for another easy basket until A. Tse crushed their souls, lifted off, and swatted the shot away.

Glendale was undeterred, however, and nailed a shot to cut South Pas’ lead to two. They began to feed their center, who sank jump hook after jump hook. Soon, the Nitros tied the game at 25.

The Tse sisters were quick to respond. On three straight plays, A. Tse attracted a couple of defenders and dished out a dime to D. Tse for the corner three. Then, D. Tse capped off her terrific 12-point third quarter with a deep trey just as time expired. The Tigers led, 37-28.

“I have been playing basketball all my life, so in every game I have the same confidence,” D. Tse said. “But after I start hitting my shots, I do become more confident and start shooting more.”

However, South Pas’ offense stalled to start the fourth and opened the door for Glendale to creep back within one score. As seconds ticked off the scoreboard, A. Tse forced the Nitro center into a close-range miss to seal the victory.