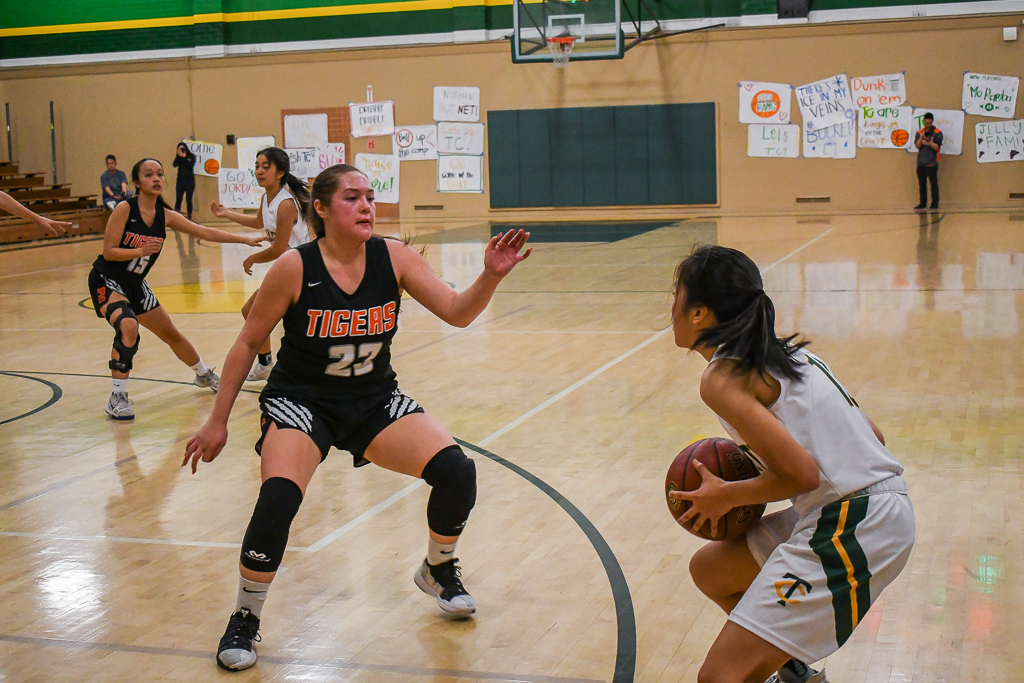 The Tigers broke away in the second half and hung on to win their fourth RHL game.

Girls basketball soundly defeated the Temple City Rams in a 56-48 victory for the second time this season on Friday, Jan. 31. The teams kept a close point margin until the second half, when the Tigers pushed a major lead and maintained control of the rest of the game. The win brings their Rio Hondo League record to 4-2.

The Tigers came out of the gate with a crisp offensive showing, nailing the majority of their shots. However, they were less consistent on the other end. Temple City slipped through South Pas’ defensive cracks, but the Tigers came out on top by the end of the period, 15-10.

The second quarter saw more aggressive plays on both the offensive and defensive fronts. The girls had a difficult time making it past the Rams’ iron defense, unable to finish many of their layups.

However, they made up for it by seeking out the ball and winning 50-50 possessions. Sophomore Allysan Tse and senior Charlize Kruzic led the way, gobbling up rebounds and racking up steals. Senior Megan Yee stayed at the top of her scoring game, earning tough points inside the paint and keeping the Tigers in the lead 25-24 by the end of the first half.

By the second half, it became clear that the Tigers would become the victors of the match. The Rams began to loosen their grip on the ball as the Tigers closed in, grabbing boards and nailing triple after triple.

Tse, Kruzic, and Yee led the charge and propelled the team to a 12-point lead as they ended the third period, 43-31.

With desperation, the Rams doubled down on defense in the final period as they fell further behind the Tigers. The game transformed into a more physical battle as the quarter pressed on.

Temple City dragged out the final eight minutes after calling three time outs, but the Tigers kept their focus and never eased their offensive play. At the final buzzer, the Tigers won, 56-48.

“I think what kept us in the game was our energy, like how we would celebrate after every three pointer or steal,” Kruzic said. “We kept up our intensity towards the end of the game and that type of effort is what made us win.”

The Tigers will face off against the Monrovia Wildcats for the second time this season on Tuesday, Feb. 4.