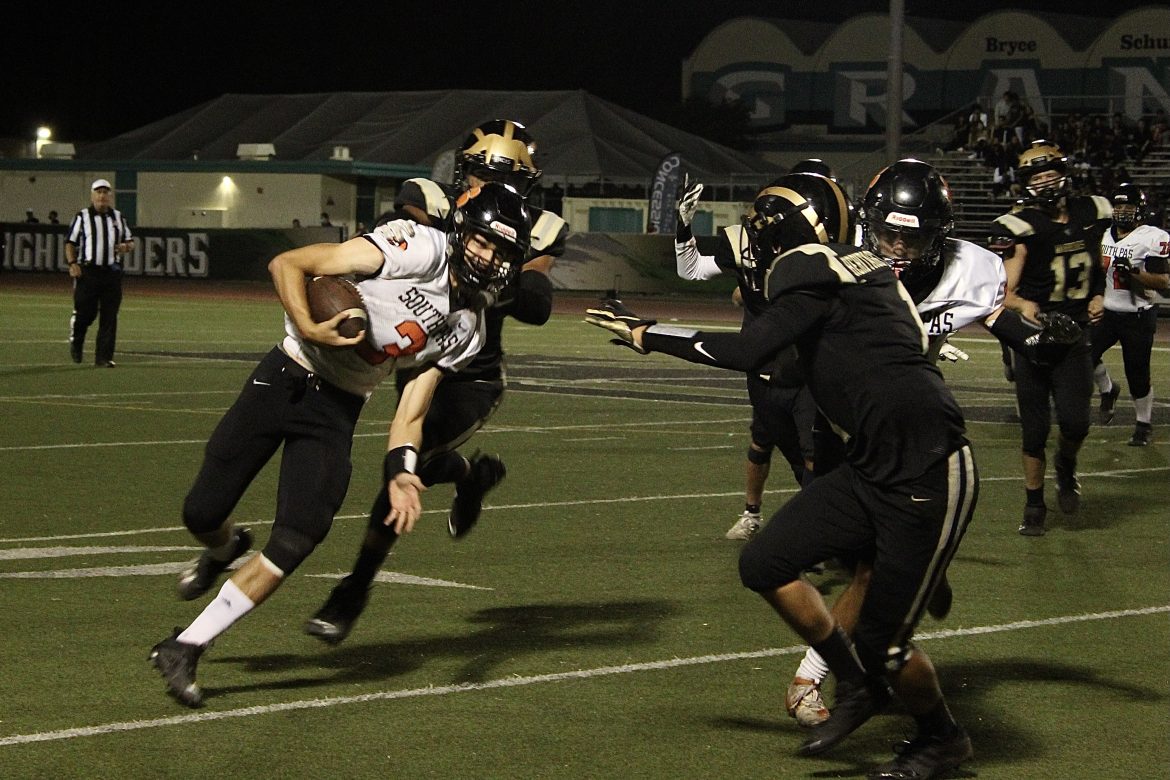 The Tigers were able to gain ground in the fourth quarter with help from senior Noah Aragon, but fumbles prevented them from a win.

Football was just a few costly mistakes away from victory in their game on Saturday, Sept. 11 against the Heritage Christian Warriors.

The game followed a similar pattern to the first two losses, starting off competitively, entering the half down by one score, and slipping away late with errors on both sides of the ball. However, down three touchdowns against Heritage Christian after three quarters, South Pas refused to cave in and made key plays to give themselves a chance. The comeback would eventually fall short in a 28-20 loss. Nonetheless, the Tigers second half showing proved they are close to a breakthrough.

The Warriors scored on their first drive to open the game, breaking tackle after tackle on their way to the end zone. The Tigers were poised to respond, getting senior running back Jack Riffle involved early. However, the drive’s promise was quickly erased on a strip sack by Heritage Christian.

Heritage Christian failed to score, resulting in South Pas holding possession. The Tiger’s handed the ball off to Riffle who was able to make it to the one-yard line, but the Tiger offense couldn’t find the end zone and came up empty.

Neither team scored on their next drive, but South Pas was determined to get on the scoreboard once they got the ball back. Once again riding the running game, Riffle and senior Alex Gonzales wore down Heritage Christian’s defense on a long drive leading to a touchdown. Riffle ran it to the pylon and tied the score 6-6 midway through the second quarter.

The Tiger’s celebration was short-lived, however, as the Warrior’s ran the length of the field for a touchdown kickoff return. They executed the two-point conversion and turned the game around in an instant for a 14-6 lead, a score that would hold going into the half.

The third quarter brought about a frustrating combination of penalties, turnovers, bad snaps, and momentum-killing special team blunders. South Pas was set to receive the ball to begin the half, but turned it over on the kickoff. On their next drive, the Tigers gained no ground and punted it only 15 yards. Heritage Christian took advantage of the field position and scored on a touchdown pass, extending their lead to 20-6.

The Warriors scored again in the following minutes, taking what they incorrectly assumed would be a safe lead into the 4th quarter.

“We have to focus, not just go through the motions,” head coach Jeff Chi said. “Sometimes when you aren’t focused you’re gonna go offsides, have illegal formations, commit penalties.”

On the next Tigers drive, Aragon continued to use his legs to gain ground. Junior Quinn Sterling caught a critical pass to move South Pas closer. Next, Aragon rolled to his left and fired an off-balance, sidearm pass to Conti at the back of the end zone putting South Pas within one score, trailing 28-20.

“We were able to execute and connect on a couple big plays and huge runs, and then get consistent stops,” Chi said. “[That] allowed us to come back really close to tying it with about two minutes left in the ballgame.”

The Tigers defense needed yet another stop to give their offense a final chance, and they stepped up once again. On a Warriors fourth and one, with South Pas faithful on their feet chanting “defense!” Dowd tackled their running back short of the first down marker.

With momentum on their side, Aragon found Riffle for a first down catch and run. The game was on the line a few plays later on a fourth down. Aragon ran right and hit Conti for a massive first down. However, the offense stalled on their next drive, and a fumbled snap on the four down ended their comeback hopes.

The Warriors took a knee on the final few plays of the game sealing the 28-20 victory.

It was a hard-fought Tiger effort and a strong fourth quarter performance that came up just short. South Pas will take on Alhambra at home on Friday, Sept. 17th.