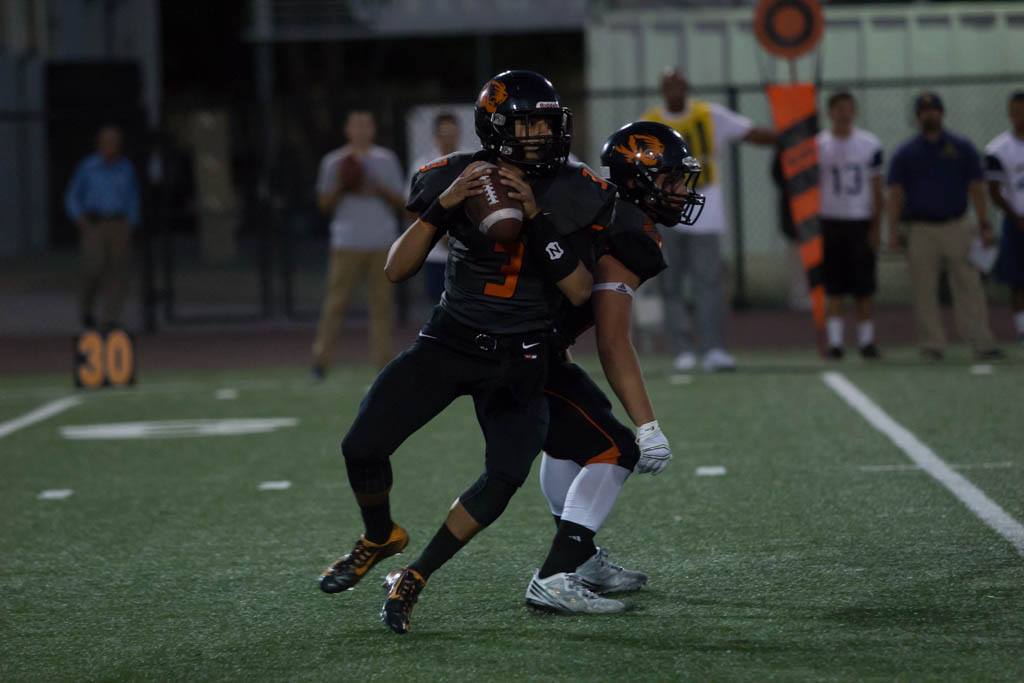 The South Pasadena High School varsity football team continued their pre-league season domination with a convincing 20-0 win against the Alhambra High School Moors on Friday, the Tigers’ third win in a row.

The Tigers’ physical defense was able to stop the larger-bodied Moors from gaining big yardage throughout the game. A solid pass coverage from the Tigers’ defensive backfield stopped Alhambra’s pass-heavy offense with ease. The Tigers also utilized their wide receivers more this game, as the air attack proved to be just as resourceful as the Tigers’ already strong running game.

“We ran our offense well tonight,” junior Max Luck said. “We tried an over-the-air tactic tonight, and I think it proved to be effective.”

On the first drive of the game, a pass interference call against Alhambra quickly brought the Tigers into the red zone. Four plays into the drive, junior quarterback Michael Partida connected with wide receiver Luck in the endzone to open the game up 7-0. Senior Alton Phillips recorded a huge sack on Alhambra quarterback Joey Pena to force a 4th down and 17 scenario. The first quarter ended with both teams forcing turnovers-on-downs on both ends of the field in what looked to be an evenly matched game early on.

“I think our defense has done great recently,” junior Christian Carter said. “It feels great to see all the guys in the locker room jumping up and down [after a win].”

Partida carries the ball on a quarterback keeper

The second quarter showcased the Tigers’ skill on both sides of the ball, as sophomore cornerback Jalen Ross deflected a throw from an unseeming Alhambra wide receiver to force another 4th down for the Moors. A great mixture of runs from Ross, who was in at quarterback, senior running back Matt Ayala, and Phillips moved the ball all the way to Alhambra’s 15 yard line. After Ross converted on a great 4th down run to bring the ball to the 4 yard line, senior halfback Ernesto Juaregui finished off the drive with a beautiful carry, knifing through the Moors’ defense to widen the Tigers’ lead to 13-0 before halftime.

Partida carries the ball into the secondary on a quarterback keeper

Phillips asserted his dominance against the Alhambra defense in the third quarter, consistently gaining positive yards on multiple plays, including a 27 yard run that brought the Tigers down to the Moors’ side of the field. Juaregui capped off a perfunctory drive with a well-executed untouched 11 yard hand-off straight into the endzone for the final points of the game. 20-0, Tigers up. An energetic Ross showed his raw speed in converting on two 4th down plays during the game to keep the Tigers’ offense rolling.

“These games help us to refine our game as a whole,” junior Jeremy Gabler said, “hopefully we’ll ride this momentum into our first league game [against Blair].”

South Pas now boasts an impressive 3-1 record, and are looking to cap-off their recent pre-league success with a win against Beverly Hills High School, whom the Tigers defeated 41-7 last season. The game will take place away at Beverly Hills on Thursday at 7:00 pm.

Tigers’ cross country executes a smooth start to the season