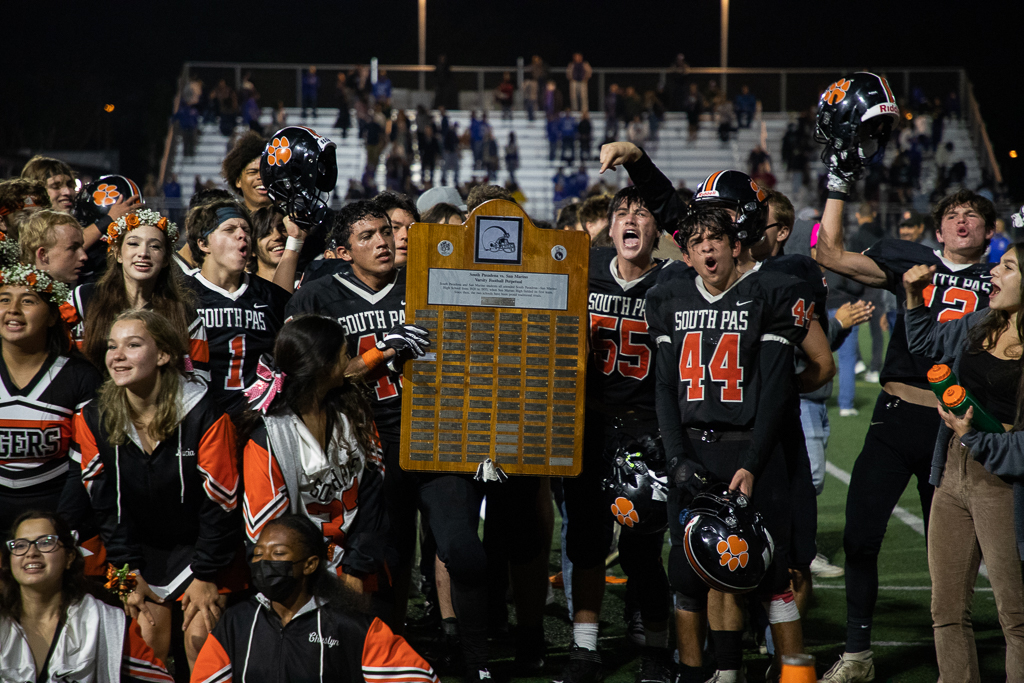 The Tigers defeated the Titans for the first time in 10 years with a game winning touchdown from senior wide receiver Grant Huntley.

A memorable homecoming week was capped off by a thrilling win for the orange and black, defeating league rival San Mario on a game-winning touchdown catch with under a minute to play. The win solidified a CIF berth for South Pas. School spirit was running high after a homecoming assembly, picnic, and a pre-game firework show. All the storylines converged for one spectacular football game: homecoming, a CIF berth on the line, as well as the detested blue and white uniforms of the Titans on the other sideline.

Football defeated the San Marino Titans 24-21 in their homecoming game, snapping a streak of 10 consecutive losses to their neighboring city’s team. Needing a victory to advance to CIF, an emphatic defense performance and late offensive heroics from the Tigers had them on top when the final whistle blew.

Posters coated every inch of wall throughout the home bleachers, each with some variation of “Go Tigers!” or “Beat San Marino!” Orange, black, and white balloons tied to the top of the bleachers waved around in the wind.

The game got out to a promising start, with senior quarterback Noah Aragon welcoming back senior wide receiver Grant Huntley with a 15 yard pass. This was Huntley’s first game back since breaking his collarbone in the second game of the season. Junior Quinn Sterling moved the chains with a catch of his own to advance South Pas closer. After making an impact with his arm, Aragon found an opening in the Titan defense and would walk untouched into the end zone for a 30 yard touchdown run. Mere minutes into the game, the Tigers held a 7-0 lead. 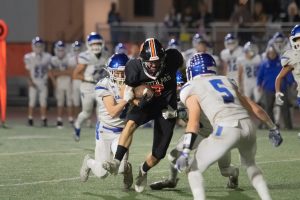 San Marino struggled to get going on their first drive, punting the ball back to South Pas. At this point in the game, fans decided to take the rivalry from the field to the seats. Each side pulled out the flashlights on their phones and started waving them around. In the first homecoming game in two years, the South Pas faithfuls’ spirit was unwavering.

Aragon uncharacteristically misread the Titan defense and threw an interception on the next play. San Marino took advantage by moving the ball downfield on the ground and through the air, and a spectacular catch from their wide receiver had the Titans eyeing the end zone. The Tigers had other ideas. A penalty and two incompletions later, San Marino punted the ball back to South Pas.

After a South Pas punt, San Marino was determined to score. They ripped off multiple solid runs and tied the game on a short touchdown pass. After a quarter, the game was tied at 7.

The Tigers responded by showing off their talented backfield consisting of senior Jack Riffle and senior Alex Gonzales. Riffle began the drive with two strong runs, dragging defenders along for the ride as he gained ground. Gonzales saw a seam to explode through and exploited it for 40 yards. Gonzales, set up by his own run, would punch it in at the 1 yard line. South Pas led 14-7, but Tigers fans held their breath as Aragon went down with an ankle injury on this drive.

The Tigers added a field goal going into the half, holding a 17-7 advantage. The marching band and pep squad performed at halftime, and senior Aidan Bar-Cohen was announced as the Royal Tiger. The news was quickly followed by fireworks, a perfect transition into the third quarter. 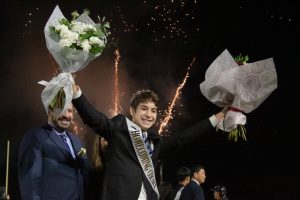 The Titans came out firing in the third quarter, using a 25 yard touchdown pass to come within three points. The Tigers were clinging to their 17-14 lead.

South Pas fumbled the ball after gaining possession, losing the momentum they so clearly captured in the first half. San Marino, however, couldn’t take advantage and turned the ball over on downs.

The turnover barrage continued with an interception by junior Jackson Freking and another turnover on downs for San Marino stunting what looked to be a strong drive.

With the Tigers still holding a narrow 17-14 advantage after three quarters, the Titans pulled out a long nine minute drive to take the lead. Numerous third and fourth down conversions kept the drive alive for San Marino, and they capped it off with a touchdown catch at the three minute mark in the fourth quarter. After an extra point, the Titans led 21-17. 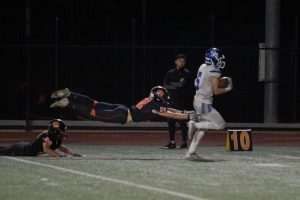 The San Marino sideline may have celebrated too early however, as Freking found Sterling and Huntley to move the ball to Titan territory. With 40 seconds to go, Freking dropped back, surveyed the field, and delivered an unwavering spiral into the hands of Grant Huntley for a 45-yard, game winning, crowd-erupting touchdown. In his first game back, Huntley hauled in the biggest catch of the season and propelled South Pas to a 24-21 victory.

“Prior to the last play, before he got the touchdown, Grant was saying to Coach Barnes and I, Hey, let’s run [this play called] an Ohio,’ head coach Jeff Chi said. “We hadn’t run that play all game long, but we saw the matchup and as soon as he snapped the ball, Grant took off and we knew he was open.”

Students, parents, and fans stormed the field after the win for a wild celebration.

“I’m so appreciative of all the support we get from the families, the fans, the cheerleaders, the band, the community, everybody,” Chi said. “It’s a collective effort to win a football game, and it was amazing last night.”

South Pas will go on the road against Monrovia next week for the final regular season game of the year on Thursday, Oct. 28.