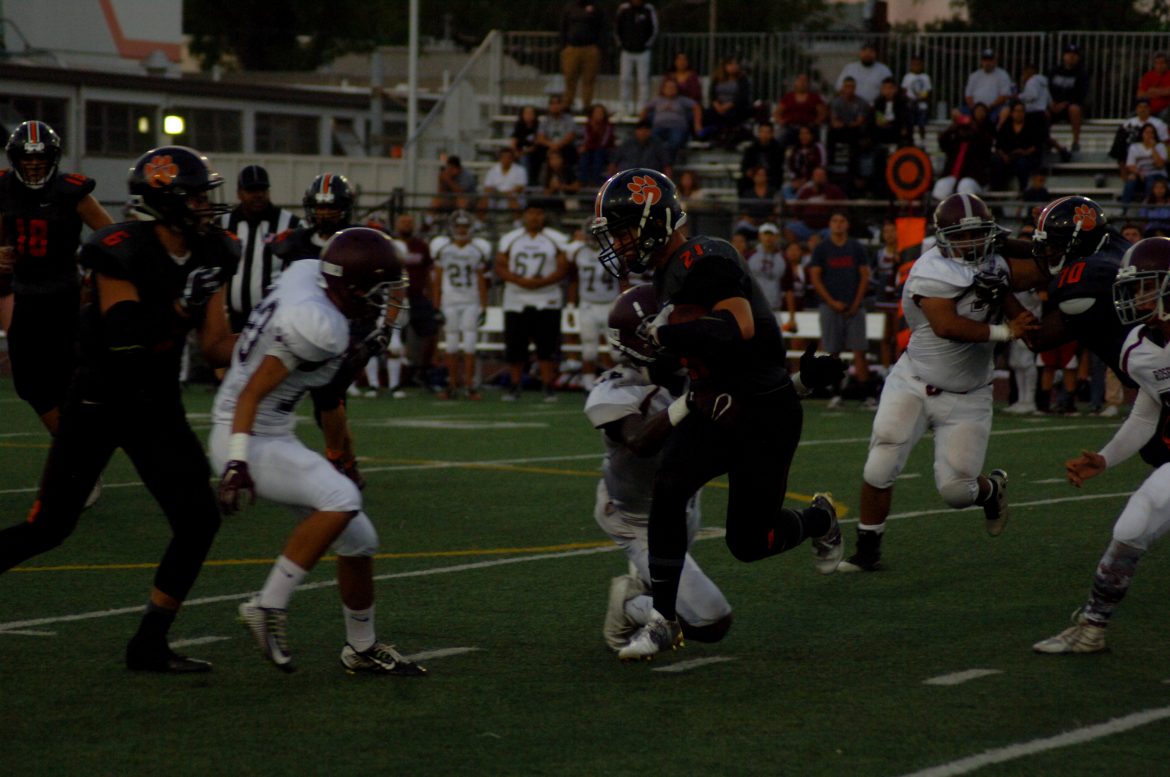 Senior Runningback Jackson Totleben avoides Rosemead defensemen as he sprints down the field.

South Pasadena football claimed a 20-7 win over Rosemead on Friday night, marking the first victory of Coach Jeff Chi’s tenure. The Tigers used a dominant rushing attack to cruise to a victory in the 2017 season opener.

The team’s opportunistic defense also was a key to their win, forcing five turnovers. Junior Jacob Barnes spearheaded the defense forcing three fumbles and recovering one.

“The defense was great,” Barnes said. “We still have things to work on, but overall we were still stopping them and hitting them to force fumbles” he added.

The game started off slow as neither team was able to put points on the scoreboard in the first quarter. Rosemead squandered an early touchdown opportunity with a dropped pass, while South Pas had a fumble and some early miscues.

The Tigers finally got the scoring started in the second quarter, when senior Jackson Totleben delivered a 19-yard touchdown rush. Rosemead responded with a long touchdown drive of their own, in which they capitalized on missed tackles by the Tigers. The score remained tied at seven going into halftime.

South Pas set the tone for the second half by moving the chains with the running game. After marching down the field behind a consistent running attack, a Rosemead sack forced the Tigers to punt. Senior Pablo Gaeta helped hold the Panthers in check, leading the team with nine tackles. The momentum returned to the Tigers with multiple penalties and turnovers which kept the Panthers out of the endzone.

Totleben finished the game with three rushing touchdowns, while also leading the Tigers with 145 yards, in 26 carries.

“The team did really well. We did a good job of limiting the mental mistakes,” Totleben said. “We need to work on holding the turnovers and miscues to a minimum though,” Totleben added.

South Pas will next host Santa Clarita Christian on Friday, September 1. In last year’s contest between the two teams, the Tigers defeated the Cardinals 30-27 in a tough road game.