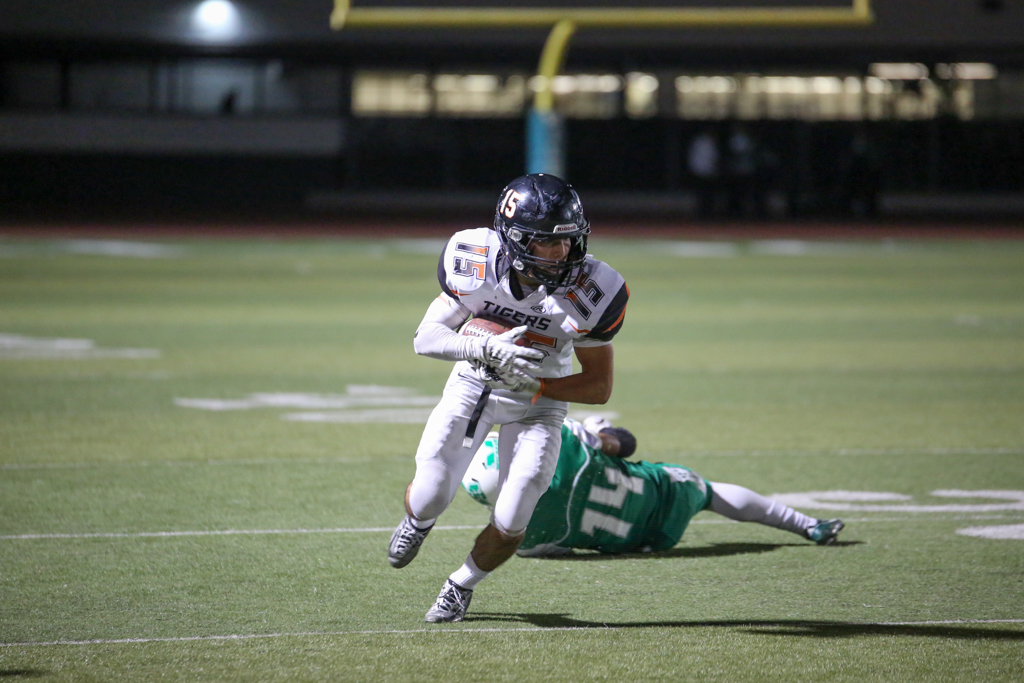 The varsity football struggles continued in the team’s fourth game of Rio Hondo League. In a frustrating 49-7 rout, South Pasadena now stands 2-2 in league and maintains a third place ranking behind San Marino (4-0) and Monrovia (3-1).

A quick turnover on downs stalled the South Pas momentum and allowed Monrovia to make quick work of the slow start. It wasn’t long before the Wildcats struck first blood in with a two yard punch by senior Jaylyn Newson. With the extra point good, the Wildcats led the game 7-0 and left the Tigers trailing behind.

The Tigers forced a punt after going three and out the second drive against the Monrovia defense. The Wildcats’ next charge ended with a 26 yard lob over the South Pas safety as senior James Nelson made the conversion and expand the score to 14-0. Junior wide receiver Jalen Ross returned a kick to the Wildcat 43 yard line and ignited the Tigers to push the offensive. A pass from senior quarterback Michael Partida to Ross made its way to the 21 yard line to give South Pas a perfect scoring opportunity. Senior running back Jason Takarabe muscled ten yards and moved the line of scrimmage into the red zone to close the gap. After three drives into the Wildcats’ territory and producing little headway, the Tigers attempted a field goal, only to fall short of the goalpost.

“We didn’t really get our momentum going but we’ll be ready next week,” junior quarterback Adam Arellano said. “We need everyone to start playing with their hearts and play as one team and when we do that everything will flow.”

The Wildcats would recover the ball shortly after on a Tiger punt. Monrovia’s Newson’s run up the right added six more points to Monrovia’s already lob sided score. Senior running back Emiliano Sornoso racked up receiving yardage to keep the offense moving forward but ran into the efficient Monrovia secondary which forced another three and out drive to end the half.

The Wildcats rode their momentum into the second half as a 66 yard deep ball to tight end Tony Romo led Monrovia right back to the Tigers’ side of the field. A fumble recovery the next drive put the ball into Tiger hands. However, the Tigers could not salvage any plays and were forced to punt again.

“I wasn’t happy about the way we came into the game [but] what we have to do is put this game into consideration, put more hard work throughout this week and now it’s a must win to get into playoffs,” Ross added.

Running clock regulation was put into effect after a bullet pass from the Wildcats tallied the score at 35-0. Sornoso came back out on the field and completed back-to-back receptions for the Tigers to reach the 20 yard line. With a first down at the nine yard line, South Pasadena was determined to finally reach the end zone. Arellano’s pass to Ross in traffic tacked on the Tigers’ only touchdown of the game.

Monrovia answered back, poised to take the last act on the field. The Wildcats scored one last offensive touchdown and a pick-six in the final minute of the game to end the game 49-7.

“We [have] got to have each others back and be a family no matter what happens,” Arellano said.
South Pasadena will now try and hold its final CIF playoffs berth against the Temple City Rams away next Friday, October 6 at 7:00 p.m. The Tigers took last year’s matchup against the Rams 41-18. Temple City is 1-3 in league play.

This is the “real world”