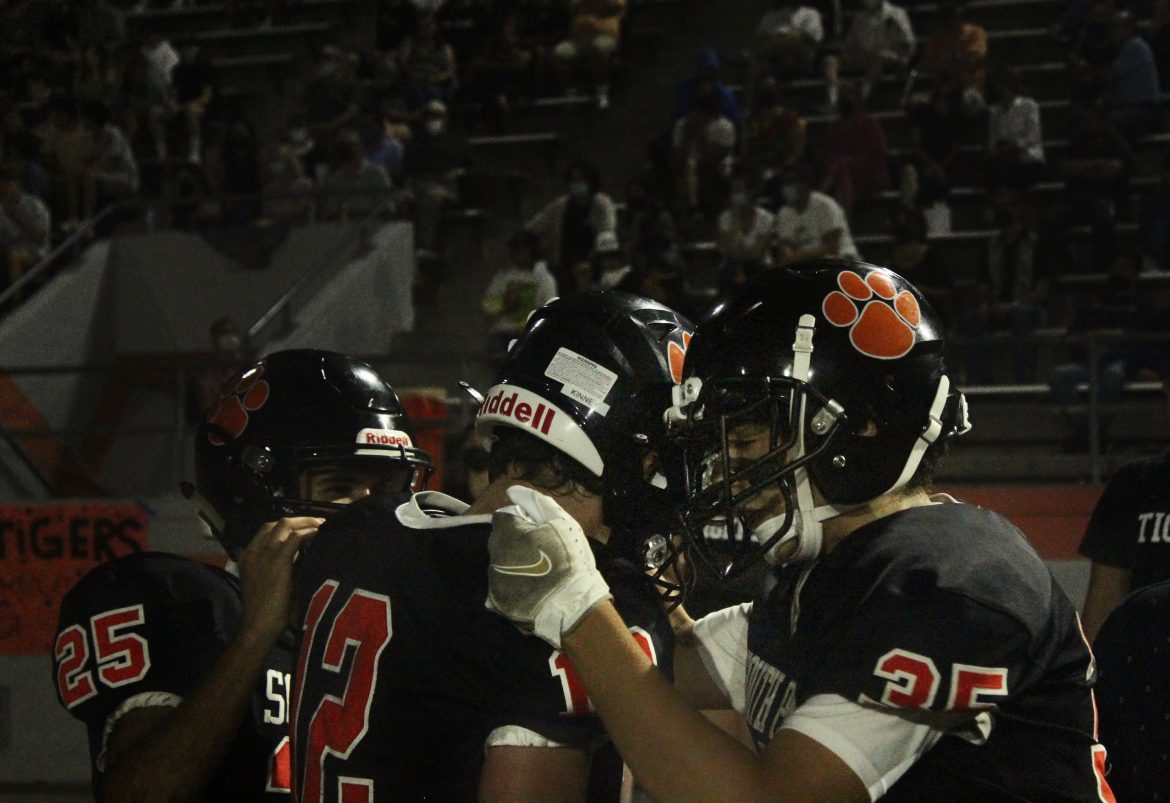 Football entered the Marshall Barristers Boyd field 0-2 in league and boarded the bus a little under two hours later at 1-2. The Tigers battled the Barristers on the road on Thursday, Sept. 2, and after coming off back-to-back frustrating losses to open the season, South Pas put it all together in a 42-0 blowout against Marshall.

South Pas was dominant on both ends of the ball, scoring 6 touchdowns while only allowing two Marshall first downs. Led by senior running back Jack Riffle’s four touchdowns, the Tigers won their first game of the season in commanding fashion.

“This week of practice I think we really matured as a team,” Riffle said. “We’ve gotten less penalties, we’ve turned the ball over less, and that’s a key to us winning today.”

Football started their first drive of the game on a short field, needing only runs from Riffle, senior Noah Aragon, and sophomore Jason Hong to find themselves yards from the end zone. Riffle punched it in a few plays later for his first touchdown of the game, giving South Pas an early 7-0 lead.

After Marshall gained no yards on their first drive, South Pas received a short punt at the 30 yard line. Consecutive Riffle gains were negated by consecutive holding penalties, but the Tigers got the yards back on a big gain from junior Nick Eshom. The drive spilled into the second quarter when Jack Riffle broke the plane of the end zone and extended their lead to 14-0.

After football’s defense forced a Marshall kick, senior Alex Gonzales blocked the punt with textbook footwork and impressive athleticism. Gonzales, junior Quinn Sterling, and junior Matthew Takasugi were among the many South Pas players who impacted the game on the defensive end.

South Pas, for the third time in as many drives, started on Marshall’s side of the field. This time, however, they couldn’t take advantage of the field position.

South Pas combined its high-flying offense and dominant defense in an impressive sequence of events heading into the half. The Tigers lockdown defense forced a Barristers 3-and-out and scored on a 20 yard touchdown run from Riffle, his third of the game. After another Marshall 3-and-out and punt, there was another Marshall special teams blunder. Controlling the special teams game was a critical part of the Tigers win.

Freshman James Dowd and sophomore Harrison Farley combined for a fumble recovery on the kickoff, starting the next South Pas drive at Marshall’s 15 yard line. Aragon squeezed the ball to Riffle through three Barrister defenders for Riffle’s fourth touchdown of the game. South Pas led 28-0 at the half and didn’t allow a single first down.

South Pas carried their momentum into the 2nd half. Marshall was tired and desperate offensively, and after picking up their 1st down of the game, turned the ball over. Junior Richard Conti caught a touchdown pass, and Gonzales got in on the action with a touchdown run. South Pas closed the book on their impressive performance against Marshall with a 42-0 victory.

“We got in here, ran up the score a little bit, and then just ran the clock out and got out of here with a win,” Riffle said. “We are gonna work on the things like holding onto the ball and causing less penalties, [but] as long as we don’t do those things we’ll be fine for next week be ready.”

South Pas will look to even up their record on Saturday, Sep. 11 at home against Northridge in their last non-league game.