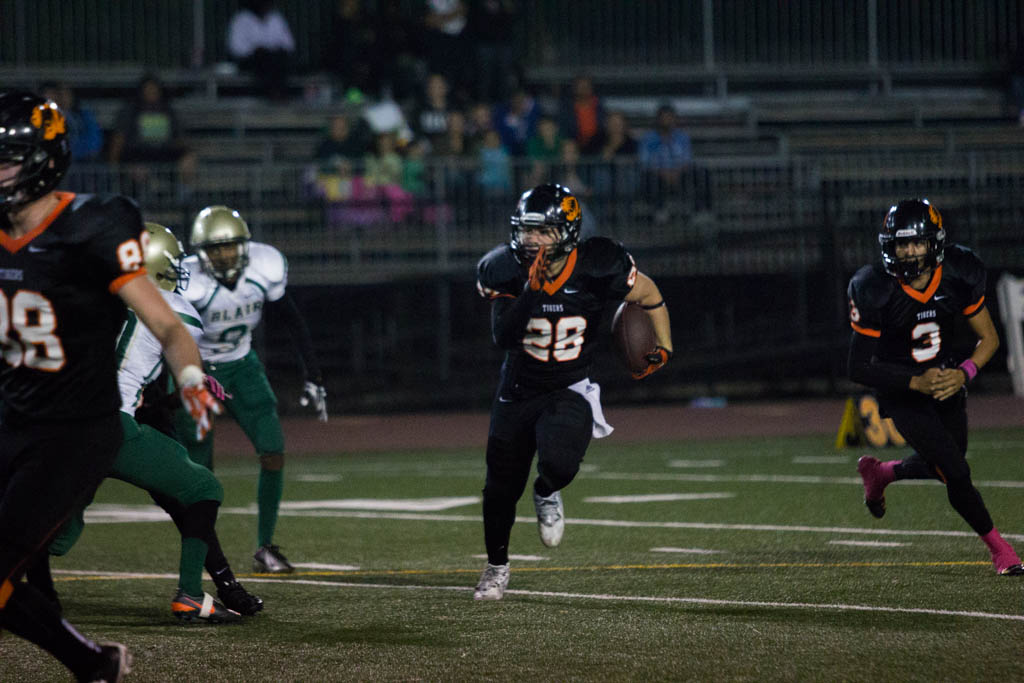 With the Color Day atmosphere filling the bleachers on Friday, the South Pasadena High School football team had an immense amount of student support for their league opener against Blair High School on Friday.

Jauregui carries the ball past a Viking defender. He would find the end zone on both offense and defense.

The Blair High School Vikings came into the contest with a record of 3-2, a win total that equals the amount of Blair has accumulated in in the past 4 football seasons. However, with momentum built off of a four-game winning streak, the Tigers dominated the game in a lopsided 55-0 win over the Vikings. The Tigers have now won their past 5 games while allowing the opposing team to score only an average of 4 points per game during that period.

“Our defense has been great so far this season,” senior halfback and linebacker Matt Ayala said. “I think its a real testament to the team: when we work hard, good things happen.”

South Pasadena could be seen in Blair’s territory almost the entire game. On the first play of the game, junior linebacker Jeremy Gabler forced a fumble on Blair’s 25 yard line to get the Tigers within striking distance only five seconds into the matchup. Two plays later, quarterback Michael Partida handed off the ball to Ayala, who ran down the right side of the field untouched to put the first points up on the board 7-0. After forcing a quick turnover on downs, the Tigers then slowly made their way back to the 7 yard line after a great 30 yard punt return from offensive weapon Jalen Ross. Senior fullback Alton Phillips drove the ball down the right side of the field for another Tiger touchdown, making it 14-0 in South Pasadena’s favor with 4:37 left in the first quarter.

Ross returns the ball vs. Blair. He has been an integral part of the Tigers’ offense, and has contributed well on defense, as well.

On the first play of Blair’s next drive, a miscommunication between the running back and quarterback left the ball wide open for another fumble recovery for South Pasadena. Senior Ernesto Jauregui took the ball on the Tigers’ first play of the drive for a great 28 yard touchdown run, putting the Tigers up 21-0. Not to be outdone, a great kickoff return and a few good runs from Blair running back Kyle Kinley brought Blair to the 50 yard line, only to be intercepted by junior linebacker Christian Carter.

Junior runningback Jason Takarabe carries the ball into the secondary.

The Tigers continued to assert their dominance with a great read option keeper from Partida for 20 yards and a touchdown, extending their lead to 28-0. After forcing another Blair punt, Partida threw to a wide open tight end in Leon Marchis to earn the fifth touchdown of the game for the Tigers. After the extra point attempt was blocked, the Tigers led 34-0.

In the next drive, Jauregui intercepted an underthrown pass from the Blair quarterback and ran it back for 6. Ross then converted on a fake extra point attempt, putting the Tigers up 42-0 to end the half with all of the momentum on the Tigers’ end of the field.

“It feels great to be able to get all that momentum going from the start” Ross said, “I think with the confidence that we have now as a team, we can face off against San Marino.”

To add to Blair’s troubles, Ross returned the second half kick off with a 97 yard kick return straight down the center of the field to make it 49-0 with just under 24 minutes left in regulation, Ross’ second electrifying kick return of the season.

Takarabe carries the ball into the second level of Blair’s defense.

At this point in the game, subs were put in for practice reps, and the defense kept Blair’s offense at bay. The Vikings had a total of three first down conversions for the game, marking the third time this season that the Tigers have kept their opponent scoreless.

“It feels great to get another win” Ross said. “I don’t like to think of us as a ‘5 game winning streak’ team, but at the end of the day, we get the job done, and that’s what our coach asks for.”

Up next for the Tigers is a very talented San Marino Titan team who most recently lost to the six-time Rio Hondo champion Monrovia Wildcats 48-42 in a tightly contested game.

“We need to be in a whole new mindset if we want to beat San Marino” junior wide receiver Max Luck said. “We need to be focused all week during practice, and tuning up the things that we know we did wrong. San Marino doesn’t make many mistakes, so we’re gonna make sure that we force their weaknesses.”