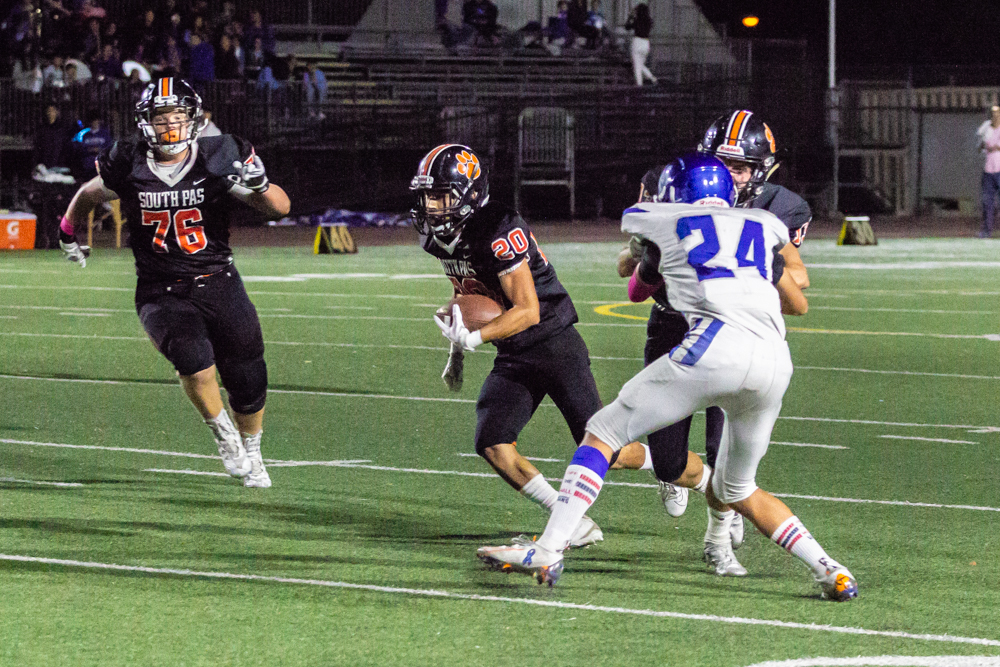 Star senior Ivan Estrada was limited to only 58 yards, his lowest total this season.

Football lost its Color Day league opener against San Marino, 10-7, Friday, Oct. 11. After a promising 5-1 preseason, the Tigers now begin the regular season with a 0-1 record.

The defense held up strong in the first half, but as the clock wound down, South Pas started to tire and San Marino managed to move through the worn-out secondary. On the other side of the ball, with only 180 yards of total offense, the Tigers were unable to maintain an offensive rhythm throughout the game.

South Pas opened the game with a strong drive down into the red zone. However, multiple negative yard plays pushed the Tigers outside of the Titan 20. Head coach Jeff Chi aggressively called for a fourth down conversion attempt, but the home team was unable to pick up the first down.

For the rest of the first quarter, neither side was able to move the ball down the field and the period ended with a 0-0 tie.

South Pas quickly shot down the field, reaching their 35-yard line. However, the momentum fizzled out and San Marino forced a punt.

With only a minute remaining in the second quarter, the Titans made their way toward the Tigers’ end zone. At the 12-yard line, San Marino could not break down the South Pas defense and settled for a field goal, ending the half with a score of 3-0.

Following the halftime break, the Titans drove 78 yards for the first touchdown of the night. The San Marino quarterback picked apart the South Pas secondary and the running back finished off the drive with a 10-yard rushing touchdown, putting the Titans up, 10-0.

Losing their grip on the game, the Tigers entered their next series with a new determination. They willed their way to the Titan 21 and senior quarterback Samuel Luna-Long found sophomore Grant Huntley for a 19-yard completion. A couple of plays later, senior running back Ethan Hong punched the pigskin into the end zone, bringing the Tigers within three points.

After the Tiger touchdown, the Titans roared back during the start of the fourth quarter. San Marino’s aerial attack brought them into the red zone, but South Pas forced a turnover on downs and received the ball at their own 12-yard line.

The Tigers were unable to score and quickly punted. The defense forced a three and out, giving the offense a chance to take the lead with three minutes left in the game.

However, the San Marino defense was unfazed and South Pas could not convert on fourth down and the Titans escaped with a 10-7 victory.

The Tigers look to earn their first league victory next Friday, Oct. 18 against the Monrovia Wildcats.