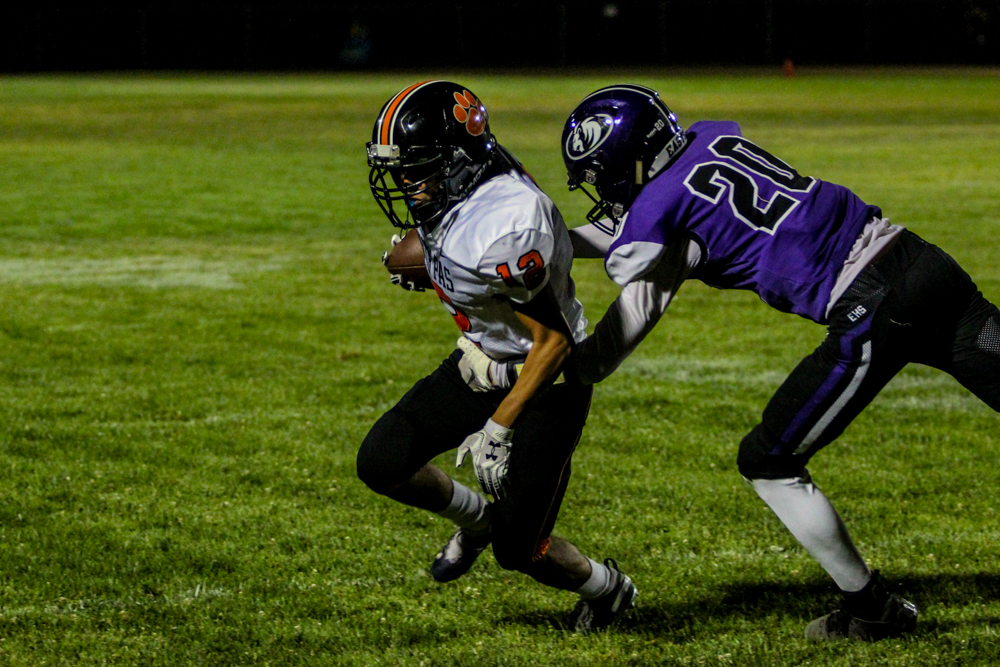 Despite numerous penalties, the Tigers pulled out a 13-6 win.

The varsity football team beat Eastside High School 13-6 in an away game in Lancaster on Friday, Sep. 6. The Tigers struggled with endzone penalties for most of the first half, failing to score many potential touchdowns. Nevertheless, their adaptability allowed them to develop a tough defense, caging the Lions in a cycle of tackles for loss and fouls. Senior Ethan Hong led a powerful ground game with 174 yards on 19 carries.

Right out of the gate, the Tigers managed to work their way into redzone multiple times in the first quarter, but penalty after penalty cost them touchdowns. Weather conditions only made the game more difficult, with harsh winds stealing a field goal from the Tigers. Spearheaded by senior Quentin Pithey, who led the team with 11 total tackles, the strong South Pas defense shut out Eastside in the first period. On the other side of the ball, Pithey wove his way back to the endzone and scored the first touchdown of the game. South Pas missed the extra point, but still carried a comfortable six-point lead.

Both sides littered the early second quarter with penalties. Perpetually tangled with Eastside in the middle of the field, South Pas struggled to generate any offense and neither team made much progress. But, halfway through the quarter, they broke away, steadily creeping up on their endzone in ten yard increments.

South Pas reached the 20-yard line with 32 seconds left on the clock. A quick pass to senior Ivan Estrada brought them up to first and goal at the Lions’ 10-yard line, setting Hong up to run in for an impressive second touchdown with only thirteen seconds remaining. This time, the Tigers scored the point after, bringing the score up to 13-0.

The third quarter was especially tough for the Tigers. Senior quarterback Samuel Luna-Long took a hard hit and sat for the rest of the game, while sophomore Grant Huntley stepped in. Although the Tigers failed to score in the third quarter, they maintained their thirteen point lead with an incredibly strong defense. The South Pas side stuffed the Eastside run and forced the Lions’ inconsistent quarterback into poor decisions.

Eastside scored their first touchdown with four minutes left in the fourth quarter, bringing the match to a one possession game, 13-6. The Lions were unable to make a comeback as South Pas calmly maintained possession and ran out the clock with the running game.

“We struggled badly with penalties in our endzone during the first half. Many of them prevented us from touchdowns early in the game. Thankfully our defense came out strong and pushed back the Lions multiple times,” junior Valentino Nguyen said. “[Junior] Terrence Sweetman has also been a tremendous help over the past three games. He’s managed to get three interceptions in our three games.”

The Tigers will have a bye week and then look to improve their record to 4-0 when they face off against the Alhambra High School Moors in Alhambra on Friday, Sep. 20.