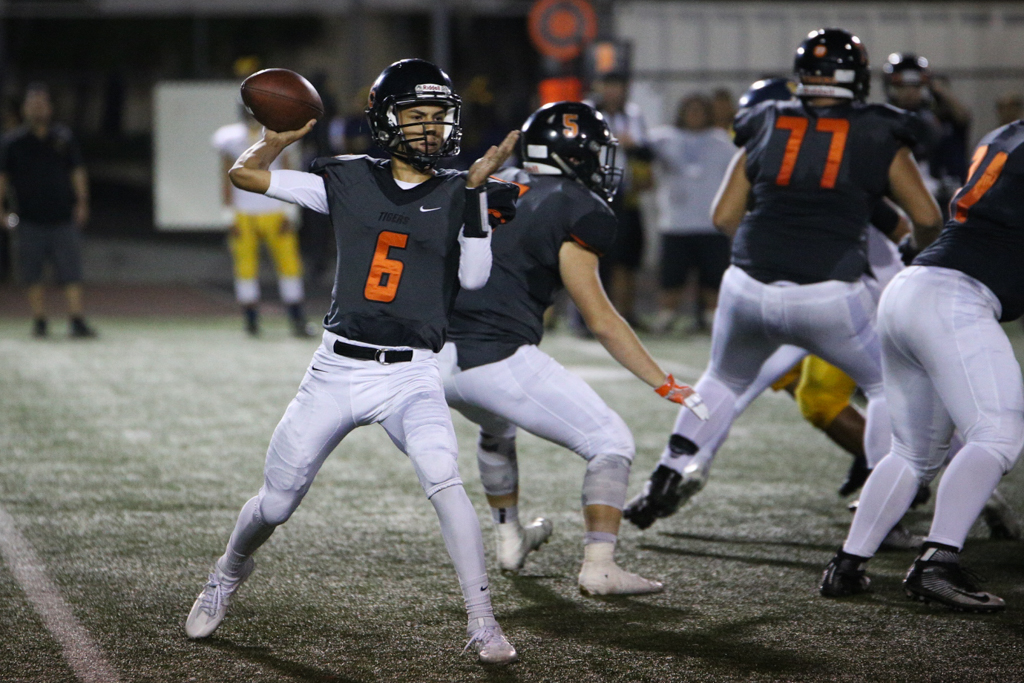 South Pasadena Football capped off the night after edging the Alhambra Moors by a score of 17-14 last Friday, September 23. The Tigers’ preseason record now stands at 3-1.

Many were unsure how the game would play out after the Moors scored on the first play of the night. In perfect fashion, the Moors’ quarterback passed the ball to a nearby receiver who then threw a lateral pass back to the quarterback for a 80 yard touchdown run.

Alhambra immediately regained possession of the ball the next drive after performing an onside kick against the Tigers. Although South Pas managed to hold the Moors offensively, Alhambra held the advantage after having the ball in back to back possessions. Despite this, senior quarterback Adam Arellano managed to jumpstart the Tiger offense with two first down receptions, reaching the Moors’ 47 yard line. This drive would be cut short the following play however after the Moors forced a fumble and recovered the ball.

The Tigers only answer back was in its defense. South Pas managed to contain Alhambra’s run game and forced a punt to set up Arellano for another drive. Senior wide receiver Jalen Ross kept momentum high for the team with a 24 yard reception, followed by senior receiver Ben Quirk reaching the 28 yard line to end the first quarter.

Senior wide receiver Jalen Ross catches the ball in the end zone for a Tiger’s touchdown.

Coming back in the second quarter, South Pas could not capitalize on offense and turned the ball over on downs to the Moors. Alhambra slowly chiseled away at the Tigers’ defense until falling short 36 yards from the end zone. After moving the ball 12 yards for a first down, the Tigers’ offense, led by Arellano, connected with Ross for a 29 yard pickup and in excellent field position. Arellano would capitalize on this and lob to junior receiver Sydney Luna-Long for a 13 yard touchdown, making the score 7-7.

Riding high off of their previous drive, the Tigers defense grounded out the Moors to force another punt with 30 seconds left in the half. With the ball back in hand, Arellano came in clutch for the Tigers and found Ross down field for a 33 yard reception in the Moors’ red zone. Ross completed the drive two plays later off of an Arellano pass with seven seconds left in the half to make the score 14-7.

The Tigers returned to the second half churning through the Moors’ defense. Right from the start, Arellano pushed the ball down field off of numerous receptions to reach Alhambra’s red zone. False starts and lockdown defense from the Moors squandered the Tigers’ hopes of another touchdown and pushed the ball back 27 yards. Alhambra countered back on the scoreboard with a touchdown of its own, 4:35 into the third quarter.

In return, South Pas blanketed the field with passes from Arellano to reach the 30 yard line, but failed to move any further. Instead, the final points of the game came from a 40 yard field goal by sophomore kicker Justin Huff. After effectively shutting down the Moors offense, the Tigers ran the clock down in the game to win the game, 17-14.

“This game shows that we need to work on our offense in the second half and we need to make sure we’re mentally mature for our next game, Arellano said. “Once our line and our receivers improve at their jobs, then we’ll be able to win any game.”

The Tigers look to wrap up their preseason in their last matchup before league at Gabrielino High School next Friday, September 30.