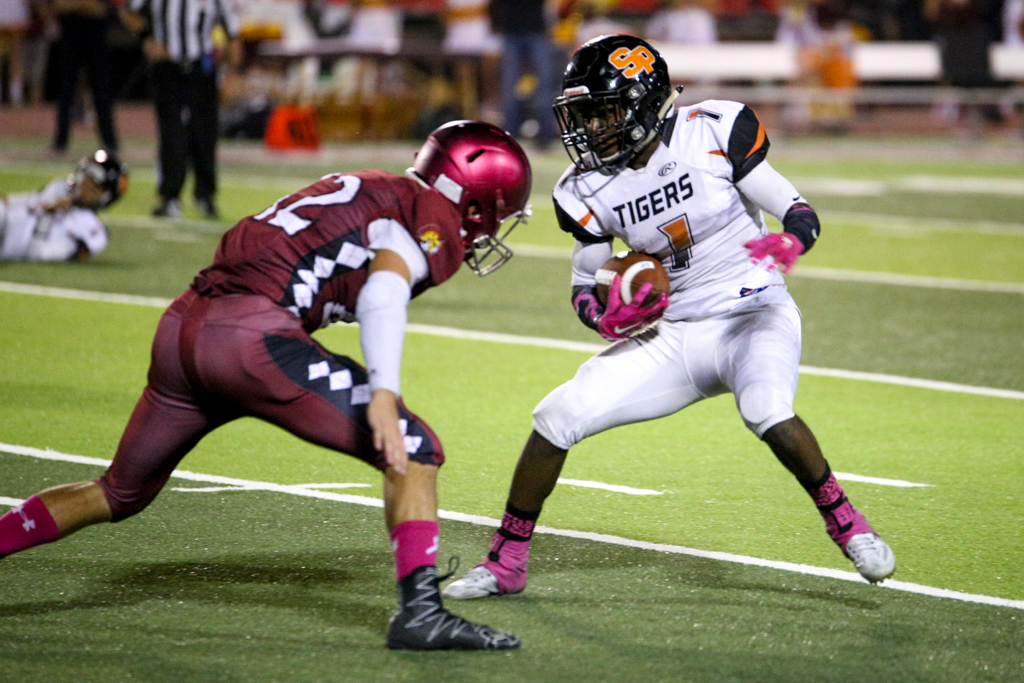 Varsity football secured its second consecutive playoff berth after defeating the La Cañada Spartans on their homecoming night with a final score of 31-6 last Friday, October 14. With Blair High School forfeiting their entire season due to an insufficient number of players, the Tigers now stand at 3-0, with a guaranteed place in the CIF playoffs.

Ben Quirk chases down the ball carrier for a tackle.

After handing the Spartans a 36-0 defeat on Color Day the previous season, the Tigers were intent on replicating similar results. Both teams opened up their first drives slow, forcing each to punt away after failing to convert on third downs. South Pas finally found its momentum in the form of a 27 yard run to the Spartans 43 yard line from senior receiver Jalen Ross. Although the Tigers offense began to falter at the Spartans 38, a La Cañada false start helped push South Pas deeper into Spartan territory. The following play, senior quarterback Adam Arellano managed to escape a near La Cañada sack and connected with wide receiver Jesus Lawler for a 32 yard reception. Arellano provided the final one yard drive into the endzone for the Tigers first touchdown of the night. After deciding to go for a two point conversion, Ross faked a run play to throw to junior wide receiver Sidney Luna-Long, who was open in the endzone to make the score 8-0.

Sidney Luna Long receives a pass from Adam Arellano to complete a first down.

The Tigers defense once again locked down the Spartans, with junior defensive end Sebastian Centrone-Castro making a big sack on third down at the La Cañada six yard line. Ross came in clutch for the Tigers once more after hauling in a 34 yard reception down into the Spartans red zone. South Pas wouldn’t capitalize on the opportunity and instead opt for a field goal, setting the score to 11-0 with 40 seconds left in the first quarter.

La Cañada returned in the second quarter slowly gaining ground against the Tigers’ defense. After reaching the 50 yard line, the Spartan ball carrier was tackled and fumbled the ball which was picked up by junior Noah Millhollin who returned it to La Cañada’s two yard line. Arellano scored another rushing touchdown after breaking through the line to make the score 18-0, 8:07 into the second quarter.

South Pasadena refused to let the Spartans gain a foothold offensively, forcing La Cañada to punt again. Another big play by junior wide receiver Danny Rios helped push the Tigers to the Spartans one yard line where Arellano would chalk up his third rushing touchdown of the night to make the score 25-0. Vise versa, South Pasadena’s lockdown defense forced the Spartans to give up possession of the ball to the Tigers. Already in La Cañada territory, Ross tallied up another catch from Arellano, followed by the team’s fourth touchdown for a halftime score of 31-0.

Starting the second half, South Pas opened the third quarter with possession of the ball but struggled the following drive. After receiving pressure from the Spartan defenders, Arellano attempted to throw the ball away in the sideline, but instead somehow fumbled the ball, which was picked up by a Spartan defender to give La Cañada their first touchdown of the game. Although the Spartans had scored their first touchdown of the night, junior defensive tackle Joshua Saucedo blocked the PAT to set the score at 31-6.

For the rest of the night, both teams would have trouble reaching each others side of the field. Although neither side could develop momentum for their offense, senior defensive end Jonathan Calderon recorded his third interception of the season in the third quarter, followed by a fourth quarter fumble recovery against the Spartans to help seal the victory for South Pas.

“Last year our game against La Cañada was our statement maker in league, similar to this year,” Arellano said. “We executed really strong in the first half; obviously we just need to work on a few things in our second half game but aside from that it feels great to win. [Now] our biggest task for us in going to be San Marino and if we can beat them, then we’ll be able to perform well against Monrovia and compete for league champs.”

South Pasadena will return to league play against the San Marino Titans on Thursday, October 27 on the Titans home field with a bye next week against Blair.

“We showed that our defense is one of our strongest areas with the team and if we improve on our offense then we’ll be even better,” Calderon said. “We’ve worked really hard with our new coach and we put a lot of work into the offseason and it’s starting to pay off for us.”