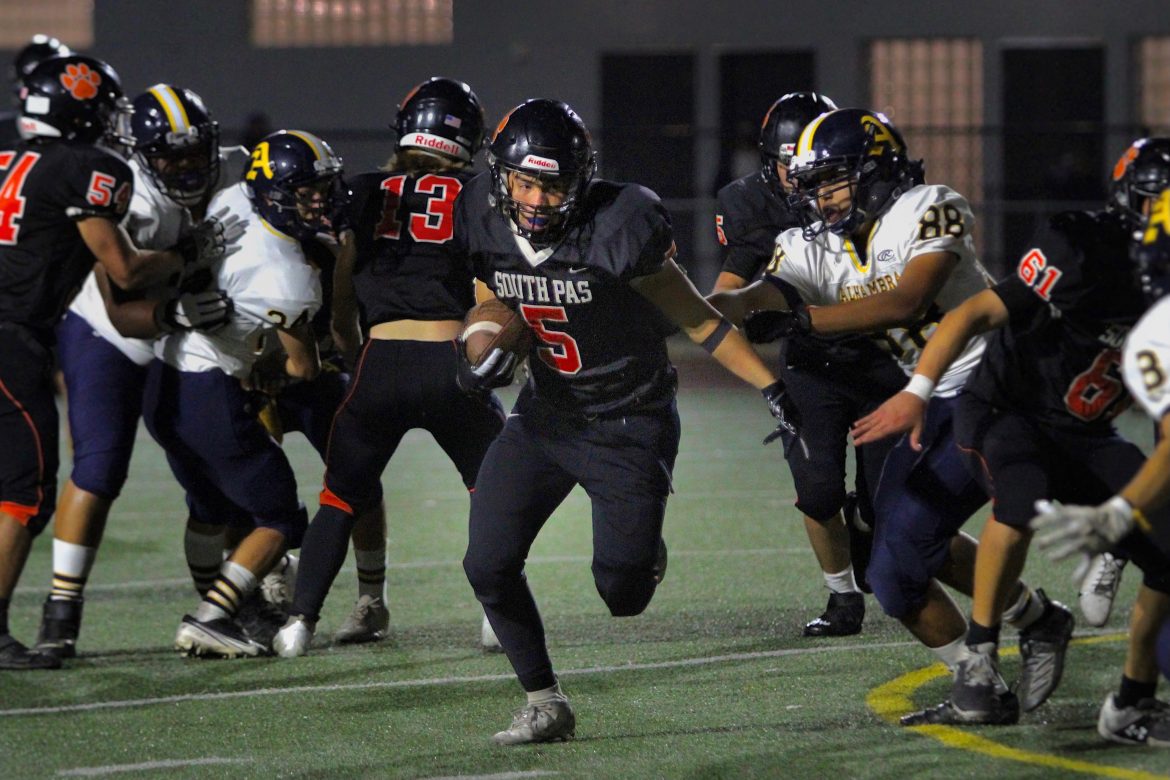 Senior running back Jack Riffle (5) totaled up an impressive 205 rushing yards and two touchdowns on Friday.

It was a memorable night for football on Friday, Sept. 17. The Tigers jumped out to an early lead and never looked back. Fans enjoyed the 45-27 victory against the Alhambra Moors, and many students stayed after the game for the Icebreaker Dance. Losing badly in their first home game, South Pas was determined to win behind a roaring Tigers crowd and finish their non-league competitions with a victory.

It was clear the Tigers had brought their “A” game against Alhambra from the first drive. Senior quarterback Noah Aragon spread the ball around to junior Jackson Freking, junior Richard Conti, and sophomore Sawyer Fox on the first drive. Senior running back Jack Riffle broke off a 20-yard run and walked untouched into the end zone to give South Pas a 7-0 lead.

The Tigers defense forced an Alhambra punt to get the ball back. Runs from Riffle and senior Alex Gonzales put them on Alhambra’s side of the field, before Aragon took it himself all the way to the end zone, leading South Pas to extend their first quarter advantage to 14-0.

“After being 1-3, we knew we couldn’t start flat-footed,” Riffle said. “We started firing out of the gates, got 14 points, and that’s the key to us winning.”

Junior Quinn Sterling made two consecutive tackles on Alhambra’s next drive, but South Pas failed to take advantage of the situation and surrendered a fourth down touchdown pass to make it 14-7.

South Pas quickly stifled any comeback attempt Alhambra was starting with a touchdown midway through the second quarter. Receptions by Freking and Riffle set the drive up before a bad snap pushed them all the way back to 3rd and 14. Aragon heaved a prayer to the end zone on the next play where the ball looked to be intercepted. Instead, as if the football gods themselves were watching, the ball slipped through the hands of two Alhambra defenders and landed with Conti in the end zone. The wild touchdown put them ahead 21-7.

The Tiger defense continued to eliminate Alhambra’s run game and force errant throws, leading to another Moors punt. South Pas added a field goal on their final drive of the half, but Aragon landed hard on and injured his right knee on a pass attempt in the closing minutes of the half. The Tigers held a commanding 24-7 lead at halftime. 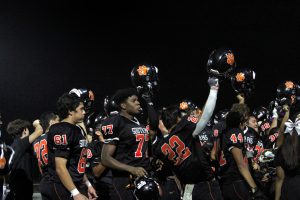 Freking entered the third quarter as quarterback and picked up where Aragon left off in the Tiger’s electric offense.

“It’s crazy because [Freking] was a receiver to start the game and he broke so many tackles; he had a really good first half,” Riffle said. “Then he had to come in as quarterback out of nowhere, and he did amazing.”

Riffle once again found a hole on the next Tiger drive, and wasn’t brought down. He went 75 yards for a touchdown that just about put things out of reach for Alhambra.

Each team scored again in the third quarter: Alhambra on a short touchdown pass, and South Pas on a perfectly placed ball from Freking to freshman James Dowd.

The Tigers added seven more points late on another Freking touchdown pass, and Alhambra scored twice in the final minutes, but it was too little too late for them.

South Pas defeated Alhambra 45-27 in commanding fashion. After a break in the schedule next week, they’ll look to even their record on the road in their first league game against Temple City on Friday, Oct.1.

School Board waives community service requirement for class of 2022