Despite a mantra of tolerance at SPHS, conservatives are often left silent 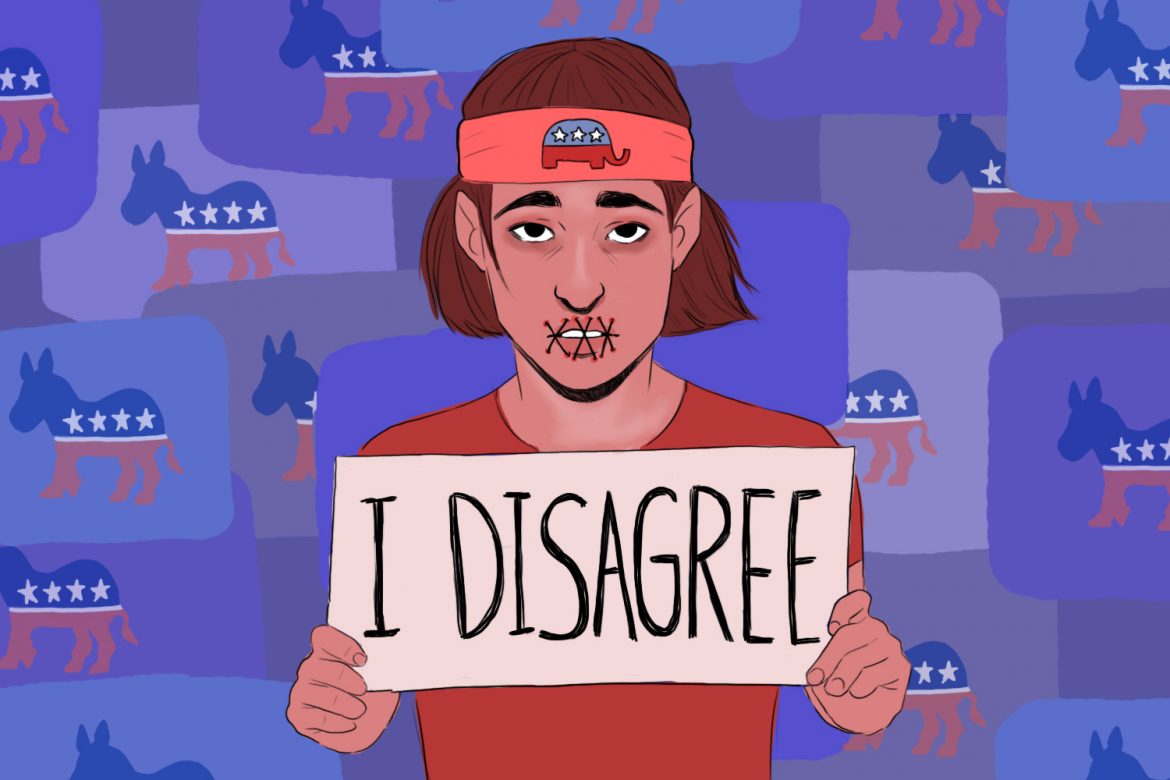 South Pasadena is known as a safe and welcoming place for all people; we are proud of our principles of social progress and tolerance. While SPHS may appear to champion acceptance of people, the collective atmosphere and attitude on campus is unaccepting of ideas, especially non-majority opinions.

The overwhelming presence of liberal ideology in our community is an undeniable reality. While there is nothing inherently wrong with this, it has the collateral effect of marginalizing contradictory ideas, especially conservatism.

One teacher, who did not wish to be named, says that the intolerance of support for reasonable conservative viewpoints, such as opposition to illegal immigration, are labeled as hate speech simply because people disagree. Conservatives are afraid to speak up due to fears of being rudely dismissed or disliked for their beliefs.

“If you have your conservative values, then people will twist it and say that you are a bigot or hateful because it’s not what they believe in”, said the teacher.

Sophomore Anthony Uriarte also feels that his viewpoints are often sidelined and discredited. For example, he is often hesitant to participate in discussions out of fear of being ‘shut down’ by others.

“I was scared to do this interview. Conservatives are pressured to keep quiet; you can’t really speak out. The ‘tolerant left’ needs to be more tolerant,” Uriarte said.

According to the anonymous teacher, the degree of tolerance for someone’s minority ideologies often correlates with the level of respect for that person. The experience is akin to being any other type of marginalized identity group, in that conservatives have to regularly defend their views due to suspicion and intolerance. In order for a conservative to be accepted, they “have to be exemplary.”

“It seems that you have to prove yourself, over and over again, when you’re [an ideological] minority”, said the teacher.

The most well-known and often provocative conservative on campus is junior Charles Li, the president of the Young Conservatives Club and a self-described advocate for free speech and conservatism. He commented on the state of political discourse on campus.

“There are indeed a lot more conservatives than you’d think on campus. They’re just afraid of speaking… If you ‘come out’ as conservative on a liberal campus like ours, you will automatically be recognized as racist, sexist, xenophobic, homophobic, Islamophobic, and all those other types of ‘phobics,’” Li said.

Li identified name-calling, threats, and other types of verbal harassment as the primary method of intimidation used against conservative students. In revealing their political beliefs, conservatives risk losing friends or respect and being attacked.

A root cause of this political intolerance is often-unintended ignorance: dialogue often becomes an echo-chamber for progressive talking points, almost always not including opposing opinions. If people don’t form their own opinions and do their own research into all sides of an issue, they are more likely to base their beliefs based off of what other people say. Once misconceptions are introduced to people through outside influences, peer pressure and group mentality can cause feelings of intolerance to be magnified.

Common misconceptions include the stereotype of a conservative as a bigoted white Trump supporter.

“When I show up [to a discussion], people don’t understand it. How can you—a Chinese immigrant who is a minority, who is ‘oppressed’—support such a person, such an ideology that is so anti-poor, anti-welfare, or even anti-American? They refuse to believe that conservatism [is a diverse ideology],” Li said.

Ideally, teachers should always try to establish a classroom environment that encourages all students to share and develop their own ideas. Unfortunately, some teachers have reportedly brought their own opinions into the classroom. No political bias, whether conservative or liberal, should ever be perpetuated by teachers. Since teachers have major influence on students, it is of the utmost importance that they remain unbiased while encouraging constructive discussion.

In the recent Tiger Talks debate on the possible repeal of DACA, liberal audience members greatly outnumbered conservatives, who were confined in a small group. According to Uriarte, the disparity in numbers was not the main issue. Rather, the issue is that there was not enough respect or decorum in the audience, considering the relative formality of the event. In order for the parity of ideas to be achieved, every voice deserves to be heard in a civilized manner.

Pushed From the Left

Reactionary centrism has also been an increasing trend in the student population. Frustrations with the extreme factions on either side often leads students to look into a more nuanced or ambivalent stance in an attempt to distance themselves from the radical views that, in high school and on the Internet, often take center stage.

Although the students interviewed both characterized South Pasadena as stubborn when it comes to the acceptance of ideologies, there are various options to steer our community in a more tolerant direction. Concrete measures of protection are needed for all students who wish to express their opinions. The unnamed teacher also suggested more spaces of inclusive discussion, such as a club that provides an environment for friendly and social discourse where people can come to understand and respect the beliefs of others.

In a community that prides itself on its tolerance, the deeply rooted intolerance against opposition ideologies is an unacceptable and egregious phenomenon, especially as rhetoric on the national level turns increasingly factionist. Our campus should be an environment where ideas are exchanged freely and without fear of retaliation, regardless of political persuasion. We need to realize the grim reality of intolerance at the hands of the ‘tolerant left’, and strive to find realistic solutions. We don’t need to agree with each other, but we must try to understand why others hold certain beliefs, and look beyond our differing opinions and into things that draw us closer to one another.

I agree that our school, and South Pasadena as a whole at times can be a huge echo chamber for liberal ideas, now, I’m not a conservative, or liberal, I consider myself more independent because I agree with liberals on somethings, conservatives on others, so I’ve decided to not definitely say that I’m one or the other, but I agree that all ideologies should be given a chance to show whether or not they are worthy of consideration, in order to avoid making our echo chamber much bigger than it already is.

Peter, I greatly enjoyed your article. I am a 1966 SPHS graduate. In that era of the distant past, South Pasadena was rock hard conservative and anyone expressing views which might even be interpreted as leftist was likely to experience the same kind of negative reactions you describe being directed at conservatives today. Now, there is a growing movement by the left to impose its views on “unbelievers” by threats, intimidation and even by force if they deem it necessary. Indeed, the reaction to supress conservative thought and expression greatly resembles the actions of religious groups during the Protestant Reformation to root out, punish and even kill “heretics” in their midst. In his novel 1984 George Orwell coined the term “thoughtcrime” to describe the act of holding non-conforming views even if an individual never expressed them. Peter, looking back over the decades I am very proud that SPHS still has students like you who will stand up for the individual rights of free speech and expression guaranteed by our Constitution. By the way, you already write much better than most of the so-called “journalists” who are so anxious to hammer us with their fact free propaganda! Best wishes for a bright future! Never stop standing up for liberty no matter how difficult or dangerous it may be.