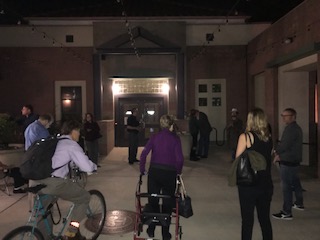 Community members met outside city hall to discuss whether to merge the Public Works and Freeway & Transportation commissions.

Members of the Public Works and Freeway & Transportation commissions voted at a joint meeting on Tuesday, Oct. 8, to decide whether to merge their two separate commissions. The vote resulted in a tie, with supporters of the resolution believing the merging will save costly resources and opponents arguing the loss of commissions will lead to decreased community participation.

The Freeway & Transportation commission played an active role in the fight against the expansion of the 710 freeway through South Pasadena. Now that the 710 freeway expansion has been stopped, the group will oversee several construction projects, including an interchange lane to enter the 110 freeway off of Fair Oaks, using the millions of dollars awarded by Metro and Caltrans.

The Public Works commission is in charge of all city maintenance and repair projects exceeding $250,000.

Mayor Marina Khubesrian has pushed for the fusion of these two commissions, citing a duplication of effort and costly resources.

“Now that the 710 extension is officially dead, there is less for the freeway/transportation commission to do,” Chief City Information Officer John Pope explained. “Many cities handle transportation issues through the public works commission.”

However, some residents have expressed concern over the potential merging because of its consequences for community interaction in local government.

“One of the reasons I love this city is because we can make some kind of effort [to get involved],” resident Delaine Shane said. “When they start reducing the number of commissions, that reduces public participation here in South Pas.”

Shane, who submitted a letter to the city council and two commissions, also explained that both commissions keep very busy, even with the death of the 710.

“The Public Works [commission] looks at a whole array of issues in our city: our streets, our pipelines to the water, our gas, tree maintenance, the whole thing,” Shane said. [The Transportation commission] works with a lot of agencies like CalTrans, the Southern California Association of Governments, and LA County Metro — they have loads of meetings.”

Currently, both commissions have five members, as well as a city staff member to take minutes and perform other duties. With the proposal, the new group would consist of either seven or five commissioners, resulting in a loss of up to half of the positions. This has Shane worried.

“If you’re talking about fewer commissioners to cover both public works projects here and all those meetings, they’re going to have to wind up saying, ‘No, we can’t go to all that. We’re going to have to prioritize. We have to cut back.’ And that means we lose out,” Shane said.

The city council has final jurisdiction over the proposed merging.Their next meeting is Nov. 6.