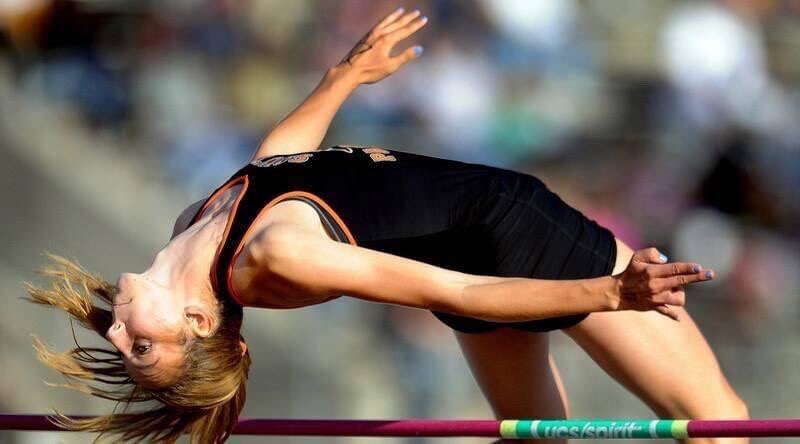 Now training as a professional athlete, Kieffer-Wright is working to attend the 2024 Olympics.

When SPHS alumna Claire Kieffer-Wright high jumps, she only has one goal in mind — to clear the bar. She applies this dogged determination to several other passions in her life, such as being a collegiate level volleyball player and even in her daily life. Her goal-oriented nature allows her to constantly strive for the best version of herself, even if circumstances may stop her.

“I wouldn’t be able to high jump as well as I do without learning from Eugene [Hutchinson], he taught me everything that was my foundation for track,” Kieffer-Wright said. “[And] I believe that running at South Pas really helped me further my athletic career.

During her sophomore year, Kieffer-Wright’s athletic prowess was brought into the spotlight. She helped lead the girls team to win the 2012 CIF Division III title. This was the first CIF title in SPHS track history and well worked for as they earned the title with only a two point lead. Later that season, she was one of the few who qualified to compete at the distinguished CIF State meet. Kieffer-Wright immediately stood out as one of the greats in the pantheon of South Pasadena’s athletic achievements.

In her junior year, she achieved the unprecedented act of high-jumping six feet. Talented high school jumpers consider clearing five feet an accomplishment. This past season, the first place mark in high jump was seven inches lower than the height Kieffer-Wright cleared back in 2013.

Her track career was far from over when she graduated high school in 2014, as she planned to run and play volleyball for the University of Michigan in her collegiate career.

Kieffer-Wright began playing competitive volleyball at age 13 and played for SPHS all through high school. Her affinity for volleyball led her to commit to play for the University of Michigan. After her commitment, she actively sought out the track coach for a spot on the track and field team as well.

Four years later, after a successful dual athletic run, she graduated from the University of Michigan in 2019 bringing with her a communications degree.

She recently quit her job at Activision, a video production company, to find an occupation more suitable for her athletic schedule. Working a standard desk job doesn’t leave much room for training and practice and if she wants to achieve her next goals, she needs to carve more time.

Her approach to her career is similar to her approach to high jump. Kieffer-Wright aims to get the job done, no matter what it takes, and her goal-oriented character is why she was one of the top producers at her work.

“Being an athlete has always made me strive for the best version of myself on and off the field,” Kieffer-Wright said. “I am very self-motivated.”

Her career thus far has culminated with many athlete’s overarching dream in mind —- the Olympics.

Kieffer-Wright was invited to compete in high jump at the 2021 Olympic Trials that were held last month at the University of Oregon. Unfortunately, she did not make the team, partly due to her ongoing recovery from a damaging injury back in 2019.

While in her senior year at the University of Michigan, she sprained her ankle during a jump attempt. She was competing at a meet, aiming to clear a six-foot mark, when she planted her jump incorrectly and sprained her ankle. The injury left her immobilized for months as she worried about the future of her high jump career, but through self-motivation, she recovered and was able to high jump at the Olympic Trials a mere two years later.

At the trials, she jumped 5 feet 9 inches on her third attempt; not enough to advance her to finals, but it was still a momentous triumph, especially as a rookie.

Constantly narrowing her vision on her next goal, Kieffer-Wright hopes to compete in the 2024 Olympic Trials. Before she can achieve that, she has some more immediate goals, such as the World Championships. No matter how many goals Kieffer-Wright may strive for, one still reigns supreme — clearing the bar.