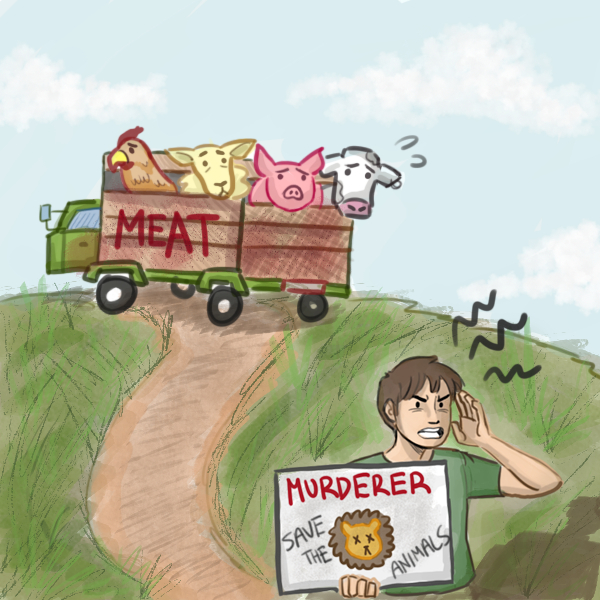 Everyone knows Simba and Nala, but more recently, Cecil the Lion has become even more popular in the eyes of the public. In early July, the black maned lion was lured across sanctuary lines by poachers, shot with a crossbow and later a gun. His unique head was taken a trophy for the kill. The horrifying story caught the attention of the public, bringing to light the issue of game hunting and resource depletion in Africa. This created an uproar of supporters for Cecil and his cause to end poaching, but many of these ‘activists’ aren’t being completely true to their cause.

Often these advocates support another, very different type of poaching industry: meat production within America. Although it’s hard to deny an amazing hamburger, eating meat is eating an animal. Slaughtered, the same as Cecil. While vegetarianism is a choice for every individual to make, crying out against poaching and the slaughter of Cecil while still supporting the much larger industry of meat production is deluding. Cows and chickens may not be endangered, as the African lion is, but that is because a whole industry has risen to assure it. By eating meat, you are supporting not only the killing of animals, but an industry that raises them simply to be killed and serve the needs of the American public.

It all comes down to lasting and widespread commitment. Being a public supporter of Cecil alone is hypocritical. It’s one thing to take up a cause while it’s trending on twitter, but another to demonstrate continued support. When standing from afar, it’s easy to place the blame on African poachers, but it’s much more difficult to measure one’s own impact on the issue. There are limited resources available to make a real difference from half a world away. It isn’t easy to place your own actions under a microscope; however, that is what needs to happen before progress can be made on any front.

Margins Magazine introduces chance for the oppressed to speak out