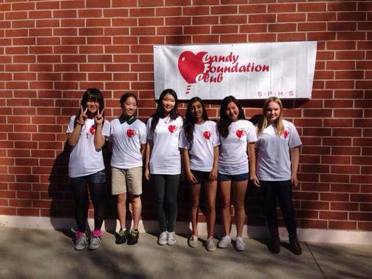 Catch up with the activities and plans of clubs on campus. The January 2015 installment features the Candy Foundation, Speech and Debate, Science, Tassel, Chinese, Coding, Disney Day, Math, and Random Acts of Kindness clubs.

The Candy Foundation Club aims to bring sweetness to children without homes or families. The club works with local organizations to provide fundraisers and entertaining activities for homeless children. The Candy Foundation Club was founded in 2013 by president Candy Xu and currently has fifty members. During first semester, they raised almost $500 by selling Christmas gifts outside of Pavilions and plan on continuing their volunteer work at the Maryvale Orphanage in Los Angeles along with several homeless shelters. During their visits, the club hopes to share “sweetness” by bringing toys as well as interactive games for all the children.

After a semester of informational meetings, Homecoming Picnic fundraising, and practices, the reinstated Speech and Debate club has begun preparation for its first two competitions of the year.

“The officers are working together to find the most helpful and interesting events to attend,” co-president Alcina Chen said. “This club is helpful to anyone who would like to improve either public speaking or just simply want to develop finer speech in daily conversation.”

During their weekly practices, club members learn about different categories and formats of competitions, review videos of national speech and debate competitions, and develop their skills by discussing a weekly chosen topic. Members plan to watch the Southern California Debate League Spring Varsity, a day long event at Arcadia High School, in order to get a sense for their competition.

Members are currently working with the Leo Club in order to prepare for an upcoming speech competition, which focuses on water conservation. Club advisor Mr. Benjamin Arnold will also be working with members as they prepare for their competitions in the new semester.

“Things are going pretty well,” Arnold said. “They are continually getting better, it is important to get them into real world situations so that they can actually show a real world audience how they have improved, and they can can prove to themselves that they have grown.”

The club hopes to be able to host another fundraising event during the spring semester.

Since the beginning of the 2014-15 school year, the Science Club has been busy competing in local challenges and exploring the professional realm of lab science.

New club members participated in the Junior Watson program on January 7, where they were given a private tour of the California Institute of Technology’s lab, and attended a lecture by one of CalTech’s professors.

Earlier in the semester, the club participated in the JPL invention challenge and were tasked with building a machine from scratch that could move a billiard ball 5 meters and then produce a loud sound exactly 20 seconds after. Despite not advancing past regionals, the club has tentative plans to present their invention on the Tiger Patio on an upcoming late start.

On February 28, members will be heading to Occidental College to compete in the 29th annual Los Angeles Science Olympiad. The competition will require members to use their skills and knowledge as they compete in a variety of categories ranging from forensics to chemistry.

“Right now we are focusing on preparing for Science Olympiad,” said club president Amador Lagunas. “We have a lot of very smart and talented people on the team and I feel that we can do very strongly at the competition.”

Since November, TASSEL club has been teaching underprivileged children in Cambodia English. The group has teachers tutor in forty minute intervals to students in Rattinak, a village in northwestern Cambodia.

TASSEL tutors use a video and screen-sharing tool called VSEE for their lessons. The club began with the letter A, and is now working on the letter E. Powerpoints that give examples of the letter and brief sentences are used during lessons, as well as games to keep the young students entertained.

Teachers begin each class period with a brief review of the lesson, and then jump into pronunciation. Students repeat words individually and as a class.

On top of teaching, TASSEL is planning a trip to Cambodia this summer. The club aims to visit the country to not only teach, but also bring supplies such as medicine. They will spend two weeks in Cambodia, and while a majority of the time will be in the classroom, they will also visit children’s homes and villages for a couple of days.

The club was created by sophomore Tei Park, and has members from all grade levels.

The Chinese International Club offered high school students and parents a head-start on “The Path to College” with a workshop hosted at the South Pasadena Public Library Community Room on Saturday, January 24. Around 40 people attended the admissions free event, which was sponsored in collaboration with the Chinese American Education Association (CAEA) and featured retired high school guidance counselor Clara Wu as a guest speaker.

Wu, who worked at Mark Keppel High School for 25 years, spoke on a wide range of issues related to college admissions, including development of good study habits, requirements for public and private school, preparation for standardized testing, and personal statement writing. For parents, Wu emphasized the importance of a supportive family environment and honest communication with school officials.

“I think the takeaway is really two-fold. I want people to grow to be respectful, responsible students and embrace personal challenges with courage,” Wu said. “The second purpose of this workshop [was] to teach people how to prepare for and get into college.”

The workshop ended a five-year activity hiatus for the Chinese International Club, which sophomore and current president Michael Wu reinstated last fall. The club also hoped to organize a Chinese New Year festival similar to last year’s event at the middle school, but a shortage of funds forced Wu to postpone plans. The club’s next step is to fundraise for future events, which may include more open-admission workshops.

“Our goal is to promote the Chinese culture and help others, and not just Chinese people,” Wu said, emphasizing the club’s “international” mission and role within the community.

The Coding Club plans to attend its second 24-hour hackathon of the year from Saturday to Sunday, February 14 to 15 as part of CodeDay Los Angeles. Participants will compete as individuals or teams to create the best possible programming project in the span of a single day.

The club made an exceptional showing at its last hackathon in November, with South Pasadena students taking home all available awards. Sophomore Leon Montealegre and seniors Stanley Tan and Alex Wong won the “Best Overall Project” award for Tanks-a-lot, a turn-based tank game, while sophomore Victor Cao took “Best Game” with his project Crazy Game, among other winners from SPHS.

Senior Brooke Drury founded the Coding Club in fall 2013, so that Advanced Placement Computer Science students could further their interests in programming, or for novices to learn coding skills. Since then, the club has grown to have its own website and more than 30 members at varying degrees of skill.

“I wanted to bring something to the community that I knew was important and would help get more students involved and interested,” Drury said. “Coding has become such an important part of the future with technology practically ruling our lives, so I figured, why not spread awareness?”

Drury, along with co-president and junior Raymond Gilmartin, hopes to expand the club’s operations in the near future to include community service.

“We plan to expand our club further as well, and may take part in volunteer work with teaching other students code, while getting hours,” Drury said. “It hasn’t been finalized, but it’s in the process of becoming a reality.”

The Disney Day Club aims to bring happiness to families of sick children at the Ronald McDonald House, by sending them to the “Happiest Place on Earth.” Members of the club aspire to raise funds and buy Disneyland tickets for a needy family at least once a month.

“The lives of families living in the Ronald McDonald are majorly occupied by lengthy hours of making hospital visits or staying home to care for their beloved children with sickness,” club president Maya Roshandel said. “A huge amount of money from the incomes of these families directly goes to hospital treatment expenses and we intend to mitigate such harsh circumstances.”

In order to achieve the club’s goals, members have been organizing and executing fundraisers. They sold homemade caramel candy apples at the Homecoming Picnic and are currently working on a restaurant fundraiser contract with Twohey’s.

The club is looking forward to promoting happiness through Disneyland, by initiating a deal with Panda Express, acquiring financial support from donors and sponsors, and bringing an ice cream truck to school.

For this school year, the Math Club  is slated to participate in the American Math Competition (AMC), contests hosted by the Rocket City Math and California Math Leagues, and meets organized by the Bay Math League. Some are team competitions and others are individual competitions.

“We seek to not only achieve greatness in competitions but also bond under our shared interests and love for math,” club vice president Raymond Gilmartin said. “Students receive the opportunity to develop their mathematical skills and form a genuine interest for the subject.”

Currently, 35 members are preparing for the American Math Competition (AMC) level 10 and 12 Exams, which are set to take on February 3. The club is also forming teams for the Bay Math League meet that is scheduled to happen after school on February 11 at Long Beach Polytechnic High School.

Random Acts of Kindness Club plans on spreading joy throughout SPHS during the month of February.

A club dedicated to recognizing and appreciating especially dedicated students and teachers, the group is planning on acknowledging 200 students and staff members by creating goody bags with thank you cards attached.

The club plans to place these bags on the student’s desks during fourth period, and leave the goody bags for teachers in their box or classroom. The club also plans on giving each active member at least three stuffed animals with attached compliments to give away every week.

These students and teachers receiving the bags have been nominated by club members.

Computer literacy requirement to be dropped