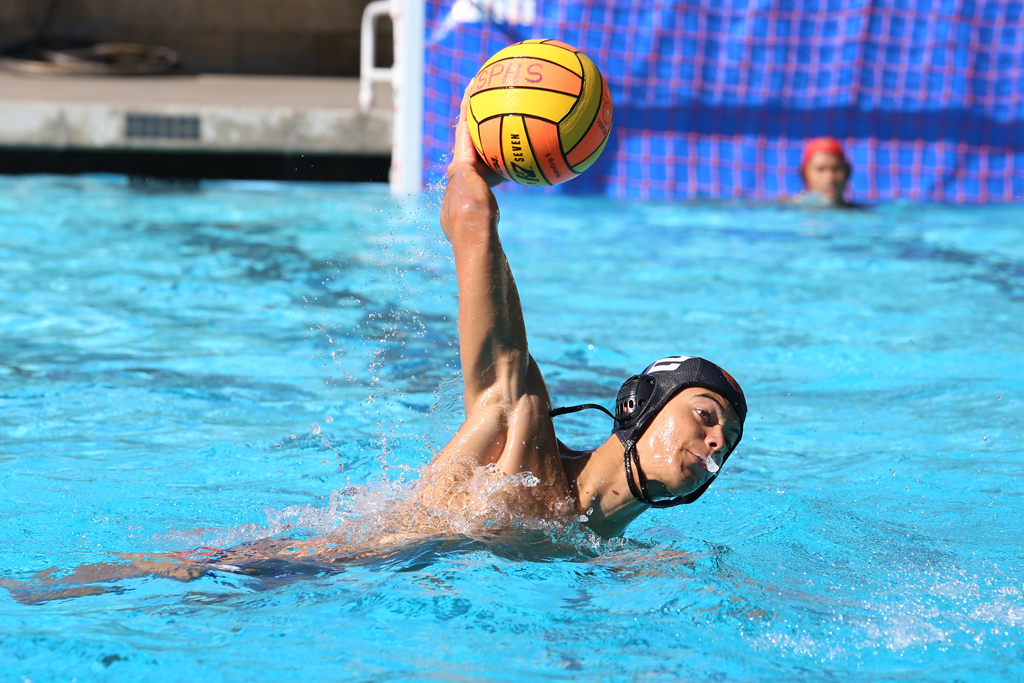 The South Pasadena boys’ water polo team defeated the Montebello Oilers 18-13, improving their record to 3-0 in their final home preseason game on Thursday, September 15. Although they won by a significant margin, the Tigers’ inability to establish their counter attack defense in the first half kept the game competitive. It was the first time this season that uncertainty inhabited the cement aquatic center. On the fast break, South Pasadena defenders were often forced to foul Montebello players to prevent large plays from developing. South Pas’ ability to wake up and show resilience was essential for their success in the second half of the game.

The offense looked healthy throughout the match, striking first with a senior DJ Myer slash over the middle. They extended their lead to 2-0 when senior Kinan Rodriguez caused a turnover that allowed senior Leo Sonner to penetrate the Montebello defense and score in two meter range. Montebello responded with two unanswered points, and managed to slow South Pas down by bringing more players goal side.  The Tigers’ defense was not allowing much scoring on the perimeter, however they were hurt by costly fouls that allowed the Oilers to score.  Despite Sonner reclaiming the lead on a nice Myer assist, the Tigers would allow Montebello tie the game 3-3 on a free shot.

Jasper Lee looks for the pass while being pressed by a defender.

The team struggles continued into the second quarter, as South Pas still did not have an answer for a quick moving Montebello offense.  Fouls continued to plague the Tigers, and allowed the Oilers to to take a 5-4 lead, the first second quarter lead South Pas has surrendered all season.  Facing a deficit, the team calmed down and established a renewed sense of  of intensity on defense. The change allowed the Tigers to limit Montebello’s ball movement as as well as display speed and physicality on both sides of the ball.  On offense they dug into the Oilers’ defenders and exposed holes in their press coverage.  They flashed good ball movement on a Sonner assist to give Myer a good shot near the goal.  With a score from Sonner and a Myer floater over the goalie, the Tigers took a 7-5 lead later in the second quarter.  The Tigers continued to pound, and finished the first half with senior Ben Schroeder scoring over the middle to make the lead 8-6.

Although the Tigers won the back and forth battle in the first half, it came at the expense of senior goalkeeper Robert Decker, who went down with a groin injury.  The situation gave opportunity to sophomore Eamonn Gibson, who played in place of decker in the third quarter.  Although he only had one block, Gibson was a pivotal part of the Tigers’ fast break.  In transition, he was able to to hit field players in stride, and allowed the team to speed on an unsettled Montebello team. They would secure a 13-11 lead with a pair of goals from Myer and senior Spencer Gurley, as well as a score from senior Cameron Benitez. Their defense remained tough throughout the quarter, despite Montebello doing a good job of stretching the South Pas’ defense.

With the lead at 13-11, Decker fought injury to reprise his role in the cage. Myer opened the fourth with another score, to help distance South Pas from Montebello.  The senior had a monstrous day in the field, scoring eight points against the oilers.  After finding their groove, the Tigers left Montebello in the rearview mirror.  They would make the score 15-11 on a senior Nic Madrigal slam near the goal, along with three points by Sonner.  Sonner scored the second most on the team with six goals. Gurley scored twice, and was followed by Schroeder, Benitez, and Madrigal, who each scored once.

South Pas will head to Sherman Oaks next Wednesday, September 21, to face off with Notre Dame, in their first road game of the year.

Educational immobility: the effects of math tracking on SPHS students