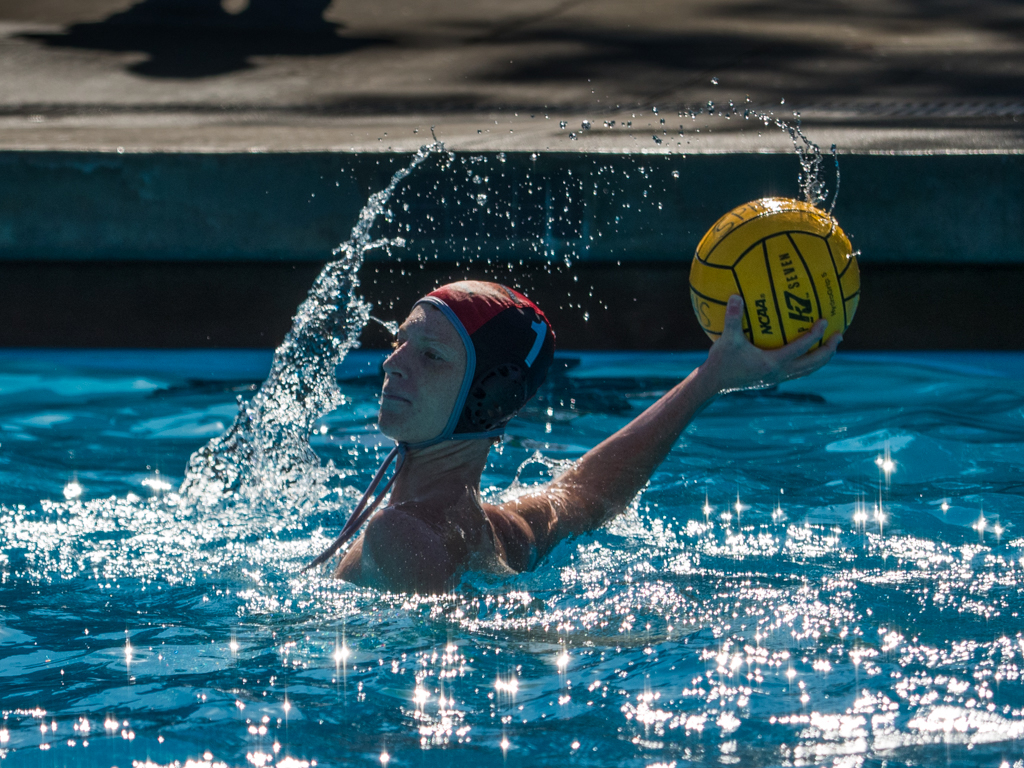 Freshman Liam Markus prepares to throw the ball in transition.

With a strong push after a lackluster first quarter, boys’ water polo overpowered Santa Monica 9-7 on Saturday, November 4, advancing to the Division IV CIF semifinals. The chance to compete at the semifinal level marks a new height for South Pas, as it is the highest point the team has reached in recent history. The game today epitomized their season, demonstrating the technicality of the players and wisdom of the coaches, both of which has propelled the team to this point. Characterized by its incredible ferocity and fast pace, the game showcased both squads’ offensive capabilities. However, it was the Tigers’ stout defense that prevailed, as South Pas only allowed three goals in the final three quarters.

With the victory, the Tigers extend their winning streak to seven games (including tournament play), and look to play either Redondo Union, who beat Notre Dame 15-9 (Notre Dame beat South Pas 10-8 in preseason), or Santiago, who beat San Marino 10-7 in early October.

Moments into the game, it became apparent that Santa Monica had studied South Pas, as they attempted to achieve the same objective that Temple City used to defeat the Tigers: score early and often, and hold on for the win. Following that plan, Santa Monica took just 24 seconds to drive through the center of the Tiger defense and strike for a 1-0 lead. Only 53 seconds later, Santa Monica converted a South Pas turnover into another goal. Identical to the Montebello game, sophomore Evan Kowal brought the score to 2-1 when he launched a strike that slipped under the left arm of the

Senior Jasper Lee cocks his arm back to take a shot on the goal.

Viking goalie. The teams traded chances before Santa Monica turned on the jets, utilizing a South Pas ejection and subsequent man advantage to gain a 3-1 lead. The Vikings increased the score to 4-1, before freshman sensation Eddie Lane-Flanigan stopped the Vikings’ momentum as he rocketed a laser to the right side of the net.

Both goalies had to be on high alert early in the second quarter; freshman Maven Palacios fired a bullet from inside two meters, which resulted in its negation, and freshman goalie Liam Markus blocked a strike from four meters out. Kowal continued to have a significant offensive presence, connecting with Lane-Flanigan and waiting a second before hurtling a rocket from three meters out. The Vikings rebounded immediately, bringing the score to 5-3.  Lane-Flanigan spun away from a Santa Monica defender and launched a skip shot into the top left corner. Soon afterward, Kline grabbed a feed from Kowal and fired a strike into the left side that tied the game at five, forcing a Viking timeout with :45 remaining. The Tigers made a late surge with seconds left, but couldn’t capitalize, and the half ended with a 5-5 score.

“We came out kind of sluggish and anxious, but by the third and fourth quarter, we were able to go on a run that put us where we needed to be,“ senior captain Jasper Lee said.

In contrast to Temple City, Santa Monica lacked sustainable offense. In the game, Santa Monica totaled just a trio of goals over the final three quarters, after tallying four in the first period. The Vikings’ only third-quarter goal came in the first thirty seconds, after which time the Tigers took control. After blocking a shot, Lane-Flanigan resumed his offensive dominance, as he received a transition pass spanning the pool from Markus and rocketed a cross-cage skip shot into the left side of the net. With his right arm being held, Lane-Flanigan lobbed a perfect shot up and over the extended arm of the Viking goalie and into the bottom right corner to give South Pas a 7-6 lead. Following a Viking timeout, the Tigers continued their attack but were unable to convert on a few opportunities.

Once again, Santa Monica struck early in the quarter, but failed to maintain an offensive rhythm, ultimately resulting in its downfall. The Tigers appeared to have scored on two separate occasions, but the goals were negated due to the positioning of the player when the shot was fired or the release time of the shot in relation to the shot clock. Late in the fourth period, during a time of unmatched gravity, South Pas expertly defended a Viking man advantage before proceeding in transition. Streaking through the pool, Kline connected with Markus and managed to fire a shot that deflected off the chest of the Santa Monica goalie and landed in the net to give the Tigers a 8-7 lead with 2:11 left. Moments afterward, Kline extended South Pas lead to 9-7 while in transition; realising he was too close to goal, Lane-Flanigan fired a pass to Kline, who spun around to create separation before firing into the left side. Santa Monica looked to stage a late comeback with the man advantage, but Markus made a crucial stop and the Tigers forced an errant shot.  The game ended with a 9-7 tally.

Boys’ water polo will play in the semifinal match against either Redondo Union or Santiago on Wednesday, November 8. The time and location are yet to be determined but can be found later at https://cifss.org/brackets/2017-boys-water-polo-32-team/.