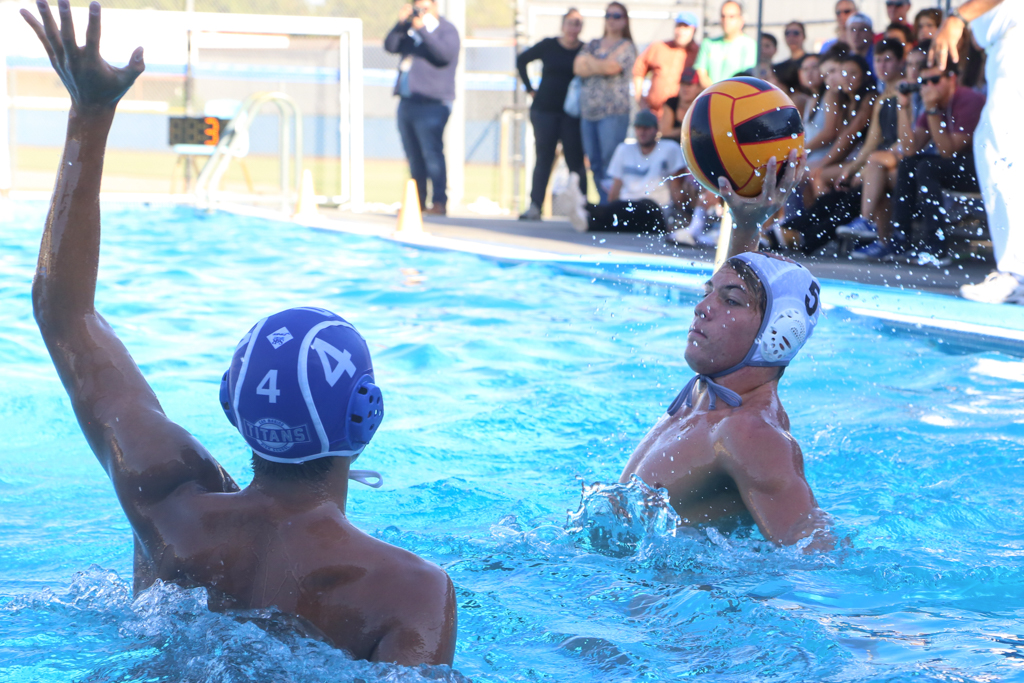 Freshman Dominic Kline cocks a shot on the goal with a defender in pursuit.

Maintaining its momentum from Tuesday’s win over Blair, boys’ water polo defeated the San Marino Titans 8-5 on Thursday, September 28, improving their league record to 2-0 and overall record to 3-3. Beginning the game with a heightened offensive presence, the Tigers jumped to an early lead and maintained that advantage for the rest of the game. The intense victory over a tough opponent in San Marino augurs success against other Rio Hondo rivals, and should add to the squad’s confidence heading into subsequent league games.

Wasting no time, freshman Dominic Kline continued his recent offensive success in the first period with a beautiful lob that floated over the left shoulder of San Marino’s goalie, on its path to the net. Seconds later, Kline capitalized on a turnover as he ripped a skipping shot that found the top left section of the goal, giving the Tigers a 2-0 lead. South Pas increased its lead by taking advantage of San Marino’s zone defense in 6 vs. 5 coverage. Senior Jasper Lee threw an accurate pass to junior Philip Lee, and Lee connected another pass to senior Alex Fonseca, who flicked the ball into the open right region of the San Marino net. After a goal by freshman Eddie Lane-Flanigan, Kline notched his hat trick off a Titan turnover, faking out the goalie on a two-versus-one break before firing a strike into the net. With 2:38 remaining in the first period, the Tigers held a 5-0 lead, forcing a San Marino timeout. The squads traded scoring chances for the remainder of the period with the Titans unable to capitalize, despite having a man-advantage.

The tide turned in the Titans’ favor during the second period, as San Marino scored off of a skipping shot to the top left corner and a put-back after an initially blocked shot. Controversial ejections called against Lane-Flanigan and other Tigers left South Pas in 6 vs. 5 coverage, but the Tigers displayed brilliant team defense by obstructing shooting angles, as freshman goalie Liam Markus made several key blocks. The teams exchanged opportunities once again, fiercely competing on each play as halftime approached. The crowds and coaches vehemently expressed their opinions on plays to the referees, recognizing the significance of the game. The first half ended with the Tigers leading 5-2.

“I thought we did a great job of executing our game plan early on. As the game progressed we did not react well to external factors, whether it be whistles, blown possessions, a run by [San Marino]…,” stated Coach Michael Gonzalez. “Regardless of what the situation is with officiating, we need to be better in refocusing ourselves.”

The third quarter was full of tension, and fortunately for South Pas, Kline stole the ball and fired an accurate pass to sophomore Evan Kowal, who in turn delivered the ball across the pool to freshman Anthony Felix. Felix promptly rocketed a strike past the overpowered San Marino goalie, putting the Tigers up 6-2. After another controversial ejection of Lane-Flanigan, Markus and Jasper Lee’s swarming defense stymied a Titan attempt to cherry pick a goal. The Tigers and Titans traded goals before the third period ended with a score of 7-3.

In the fourth period, both teams were initially unable to capitalize on scoring chances, but San Marino managed to score off of a breakaway. Facing a relentless Titan offense, Markus blocked numerous San Marino strikes, keeping the score at 7-4. With 2:47 left in regulation, the Tigers called a timeout to regroup. Soon after the timeout, Kline fired a rocket to the left side of the goal, putting the game out of reach. The Titans scored a transition goal in a final push, but it was too little too late.

“My team showed great intensity finishing 5-0 in the first quarter,” Philip Lee said. “Overall we did fairly well, and I can’t wait to see what good things this team can do.“

Boys’ water polo will play its next league match at home against Temple City on Tuesday, October 3. The South Pas squad was all but eliminated from CIF contention by Temple City last season, and should be primed and hungry for a victory.