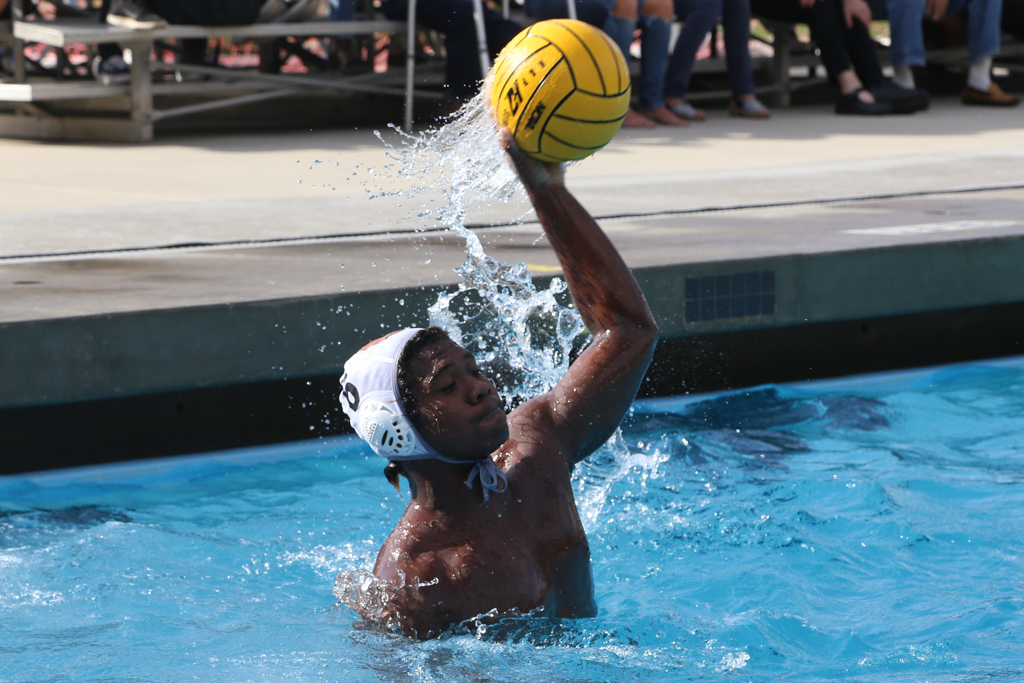 Freshman Eddie Lane-Flannigan prepares to hurl a shot at the goal.

Despite a fierce effort, boys’ water polo suffered a tough 7-6 overtime loss to the Temple City Rams on Tuesday, October 3. The defeat, which drops the Tigers’ overall record to 3-4 and league record to 2-1, was defined by consistent momentum swings and suffocating defense. As a result, neither team lead by more than a goal throughout the game.

The Tigers utilized a new defensive strategy that neutralized the Rams’ attacking players and forced multiple turnovers. South Pas confused the Temple City driver by dropping back in coverage and preventing him from passing to the flanks. By dropping back, the Tiger defense also blocked possible cross cage shots. The strategy was very effective, with the first goal the Rams scored being in transition. South Pas responded with two goals of their own, as freshman Dominic Kline lasered a penalty strike to the bottom left corner of the goal. Moments later, freshman Maven Palacios received a pass from senior Jasper Lee and flipped a no look shot past the Temple City goalie and into the bottom right corner. The Rams evened the score at two at the end of the first quarter.

Both teams traded scoring opportunities in the second period, but the score remained tied at 2-2 for most of the quarter. South Pas attempted to score by slicing through Temple City’s man-to-man defense, but were unable to execute. Luckily, before the half ended, Kline fired a rocket into the net, giving South Pas a 3-2 lead.

Temple City started to gain momentum in the beginning of the third quarter. Following an ejection on South Pas, Temple City used its man advantage to perfection, leveling the score at three with a shot to the right portion of the net. Junior Philip Lee regained the lead for the Tigers when he spun around and fired an accurate strike into the right section of the goal. Down by one goal, the Rams began to break down the Tigers’ defense, launching more shots at freshman goalie Liam Markus. Several controversial foul calls on Palacios and other South Pas players prevented the Tigers from holding possession, and gave the Rams more opportunities. Bending but not breaking, the Tiger defense held the Temple City attack at bay and the third quarter ended with a score of 4-3.

Sophomore Evan Kowal had a chance for an insurance goal early in the fourth period, when South Pas held a man advantage, but he couldn’t slip the ball past the Temple City goalie. The Rams quickly countered and were able to push the ball past Markus to even the score at four. As the game progressed, the squads exchanged shots. Markus made several significant blocks, but an ejection call on freshman Anthony Felix gave Temple City a crucial man advantage. With less than two minutes remaining, the Rams utilized the ejection and gained a 5-4 lead off a shot to the upper right section of the net. As seconds ticked off the clock, fans leaned forward in their seats, sensing the urgency of the situation. With only 30 seconds left, senior Alex Fonseca rifled an accurate strike cross-cage from a sharp angle to tie the game, extending the match into overtime.

The Rams wasted no time scoring in overtime with a skip shot to the top right corner that gave Temple City a 6-5 lead. An ejection on Temple City gave the Tigers a critical man advantage and opportunity to tie the game. Kline rose to the occasion, launching a skip shot to the top left corner. The Tigers’ celebration was short-lived as the referees called a controversial foul on the Tigers, prompting a shout of protest from Coach Gonzalez. The referees issued Gonzalez a yellow card, and Temple City carried that momentum into the next play. With a shot that found the back left corner of the net, the Rams gained the lead, and the game ended with a score of 7-6.

“[Temple City] played really hard and had the enthusiasm we had, but in the end they managed to transition their scoring opportunities better than we did,” said Philip Lee. “We will definitely put up a fight again [the] next time we see them.”