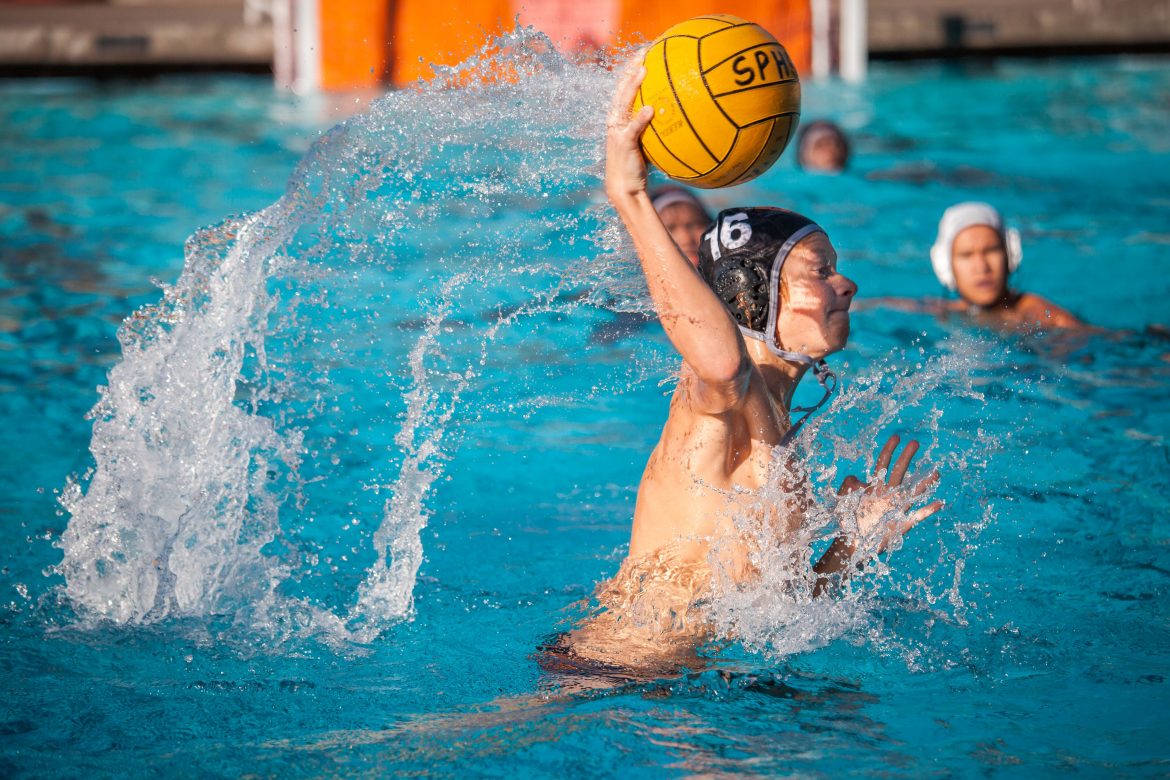 Egan Hadsell-Florin rises out of the water to release his shot.

Boys’ water polo defeated the Monrovia Wildcats 15-11 in their final game of the season on Wednesday, October 24, signifying their achievement of an undefeated record throughout their entire run. The Senior Day game displayed the strength of the Tigers’ seniors, who were recognized with touching speeches by their fellow teammates after outplaying the Wildcats.

The first quarter began with Monrovia turning heads as they took first possession and shortly secured a score on South Pas. The Tigers retaliated as sophomore Anthony Felix took charge at the goal, scarcely missing his target. However, freshman Owen Imasaki successfully hit a mid-range skip shot in the next South Pas possession. Senior Uday Sidhu took hits in front of the net, blocking close corner shots and catching powerful throws. As the Tigers coordinated with the ball in possession, Monrovia’s aggressive players fouled junior Evan Kowal and allowed Imasaki to land a five meter penalty shot. The Wildcats continued to showcase aggressive play in the pool, rebounding after a body block by Sidhu. The first quarter concluded with a minor lead for Monrovia, 3-2.

Sophomore Eddie Lane-Flannigan performed his iconic skip shot on the opposing team, tying the score at three in the beginning of the second quarter. The even scoreboard didn’t last long as Monrovia sent two daunting shots into the net one after another. Lane-Flannigan managed to garner another point through a penalty shot, while freshman Lucas Abrahamian nearly gave another point to the Tigers through a shot that flew right above goalpost. Monrovia continued to keep South Pas on edge through their difficult shots, while the Tigers struggled to keep up their defense and superior positioning. At the half, Monrovia continued to hold a lead of 6-5.

The third quarter saw South Pas trading out many of their starting upperclassmen for their young talent, including sophomore Liam Markus who took to the defense of the goal with ease. Freshman Egan Hadsell-Florin dashed in the water over to the net and lobbed right above Monrovia’s goalie, once again tying the score. The Tigers outmaneuvered Wildcat positioning through a pass from Felix inside to Kowal, who scored a goal despite being drowned by multiple defenders. South Pas’s offensive momentum continued with a streak of scores performed by Lane-Flannigan, Felix, and Hadsell-Florin. Monrovia lost their lead at the end of third quarter as the Tigers took control, 10-9.

The nearly tied score drove the South Pas team into action in the final quarter. Imasaki dashed to fake out the Monrovia goalie and slam a corner shot. A pass by Lane-Flannigan to the correctly positioned Tiger, freshman Jaren Sin, prompted a well-aimed goal. Markus consistently prevented Monrovia scores, including a straightaway penalty shot. Although the quarter was interrupted by an outage of the scoreboard, it couldn’t stop the Tigers from showing their superior lead. Steals by Kowal and freshman Michael Felix gave both Felix and Sin the opportunity to amass two more points. With only ten seconds left until the end of the game, junior Tao Lupien delayed the possession of the ball for Monrovia. A final score of 15-11 finished off the fourth quarter and the Tiger’s season.

Following the end of the match, the boys said farewell to their senior teammates and treated them to candies and touching speeches.

“Anytime that I was sad or disappointed, he was there to have my back,” junior Evan Kowal said about senior Phillip Lee. “None of us would be as good as we are right now without your encouragement, competitiveness, and love.”

Boys’ water polo plan to prepare for their first competitor of CIF, which will be released with the CIF bracket on Saturday, October 27.