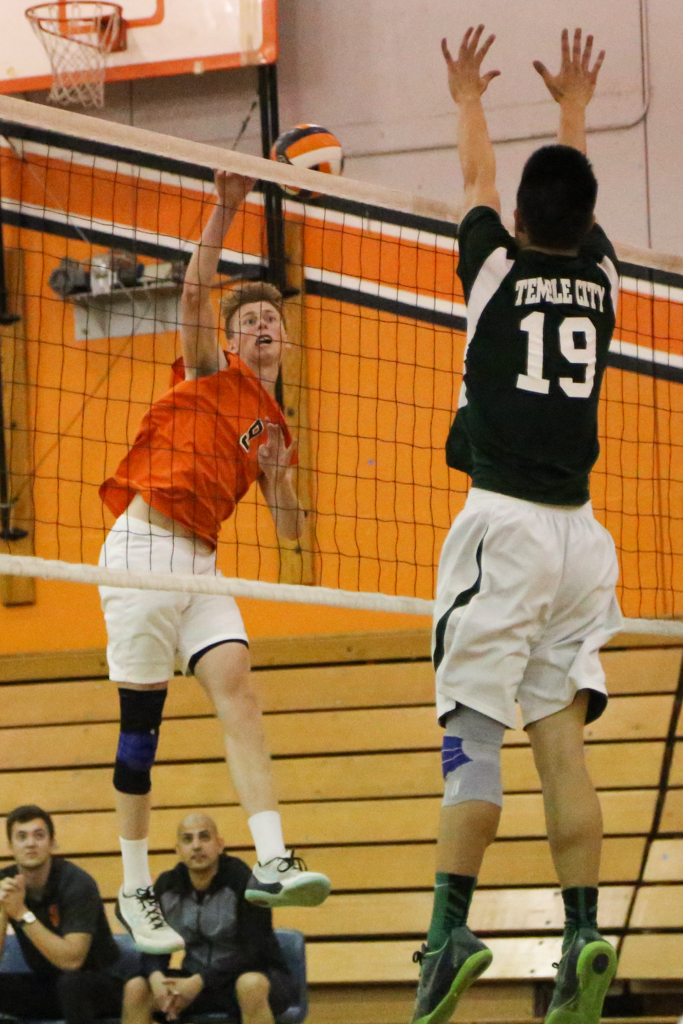 South Pasadena claimed its third victory in Rio Hondo League at home against Temple City High School last Tuesday, April 12. The Tigers won the first two sets by a score of 25-22 and 25-14 but couldn’t shut the Rams out in the third set and lost by a score of 28-26. South Pas capped the day off with a 25-16 win in the fourth set to set the team’s record to 3-1.

The Rams held the initial advantage at the start of the first set by a score of 12-8. The Tigers were able to tie the score at 15-15 with multiple kills coming from senior Greg Luck. Junior Gunther Vaden energized the Tigers offense with a kill down the middle past the Temple City defense. This would be followed shortly after by two Rams’ errors for a score of 19-16 with South Pas in the lead. Another Vaden kill stunned the Temple City players to continue the Tiger’s dominance in the set for an ending score of 25-22.

South Pas began the second set with a 4-0 run on the scoreboard before the Rams could respond back. Two kills by junior Lucas Fox extended the Tigers lead to 7-2 with the Rams unable to counter South Pas and their spikes. With the score at 11-5, Temple City was forced to call a timeout to try and stop the Tiger’s momentum. This would have no effect on South Pas as the Tigers continued to increase the deficit on the scoreboard for a convincing score of 25-14.

Heading into the third set, the Rams attained an 8-6 lead over the Tigers after forcing errors on the Tiger’s defense. Both teams exchanged kills and errors, with Temple City holding a constant lead over South Pas. Late in the set, the Tigers found themselves down 21-18 and on the verge of losing the third set. An exceptional performance by Luck allowed the Tigers to crawl back on the scoreboard. Senior Matthew Ng managed to tie the score at 24-24. Although South Pas seemed to have the advantage with the score at 25-24, the Tigers were unable to capitalize on their momentum. Temple City managed to come back and win the set by a score of 28-26

“We knew we had to finish the next set so we played more as a team and with a sense of urgency,” Ng said. “Everyone did well and we were able to finish the game.”

The fourth set saw Luck display an authoritative performance against the Rams. Kill after kill from Luck allowed the Tigers to get an early 13-7 lead in the beginning serves of the game. Senior libero Alex Nakagawa kept the team’s momentum high after tallying a point from a lob over the net. South Pas refused to grant the Rams anymore errors and dominated in the fourth set. Sophomore Cole Schroeder solidified the Tiger’s win with an ace to set the score at 25-16.

The team’s next game will be against Gabrielino High School at home on Tuesday, April 19. The Tiger’s previous matchup against the Eagles saw South Pas claim a three set rout over Gabrielino.