Boys’ volleyball defeats Simi Valley in second round of CIF 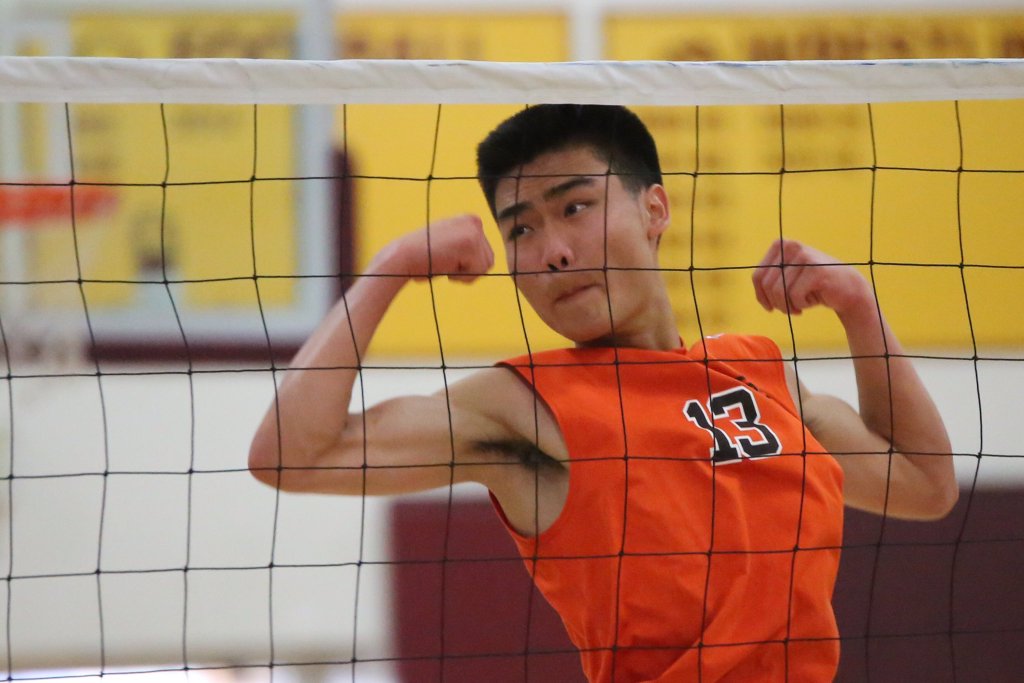 The boys’ volleyball team advanced to the CIF quarterfinals after defeating the Simi Valley Pioneers away, last Thursday, May 12. South Pas lost the first set of the game with a score of 27-25 but would return and clinch the next three sets by scores of 25-20, 25-18 and 25-18.

A jubilant crowd cheered on as Simi Valley claimed a sizable lead beginning the first set at 5-1. The Tigers’ undersized roster proved to be a problem for South Pas as spikes were continuously being blocked by the taller Pioneer players, leading to an 8-3 score. Senior Greg Luck provided ample offensive firepower against Simi Valley the entire set, scoring numerous kills against the Pioneers but making little headway on the scoreboard as a team. The Pioneers quickly jumped to a 20-12 lead, holding the advantage in the set. South Pas made quick work closing the gap on the scoreboard, after kills by the Tigers brought the score to 22-18. Lockdown defense put South Pas down 24-23 the next couple possessions. Junior Matt Scholtz came in the clutch with two kills to tie the score at 24-24 and again at 25-25. However, this wouldn’t be enough as the Pioneers scored the following two plays to win the set at 27-25.

South Pas returned in the second with Luck launching the ball at the Pioneers’ libero, scoring the first point of the set. Senior Matthew Ng tallied up his first ace of the day to intensify South Pas, with the score at 6-5. Shortly after, junior Gunther Vaden fired a solid spike down the middle of the court to extend the Tigers’ lead. An ace by senior Scott Kawakami set the score at 9-6, with South Pas in control of the momentum. Luck would help carry the Tigers the rest of the set to even the series at 1-1 with a set score of 25-20.

The third set of the matchup was highlighted by a dominating performance from South Pas. The Tigers got off to a decisive 10-2 start and never looked back. Quality minutes from Luck, Ng and Vaden pushed the score to 21-6 with Simi Valley unable to counter back. The Pioneers would attempt to crawl back on the scoreboard but falter at 25-18, giving the Tigers their second win of the day.

Both teams began the fourth set neck-and-neck. Points went back and forth as the Tigers looked to close out the matchup while the Pioneers looked to send the game to five sets. South Pas would slowly pull away with a 7-3 lead over Simi Valley. Vaden chalked up a Tiger ace for a score of 10-5. Lockdown defense by the Pioneers eventually tied the score at 11-11 with Simi Valley in control of the momentum. Scholtz fired back with two back-to-back kills to distance the score and give South Pas the lead. The Tigers slowly pulled away on the scoreboard with Luck and Scholtz racking up kills against the Pioneers. Sophomore Cole Schroeder solidified the Tigers win after scoring an ace to put the score at 23-18. Simi Valley would commit an error in the last play of the game for a final score of 25-18.

“We were able to win the three sets through determination and a lots of energy, Ng said. “With our energy, we were able to come back from lost points and push on.”

The Tigers will face off against Laguna Beach at the South Pasadena Middle School on May 14 in the CIF quarterfinals.

Boys’ volleyball sweeps Norco in first round of CIF