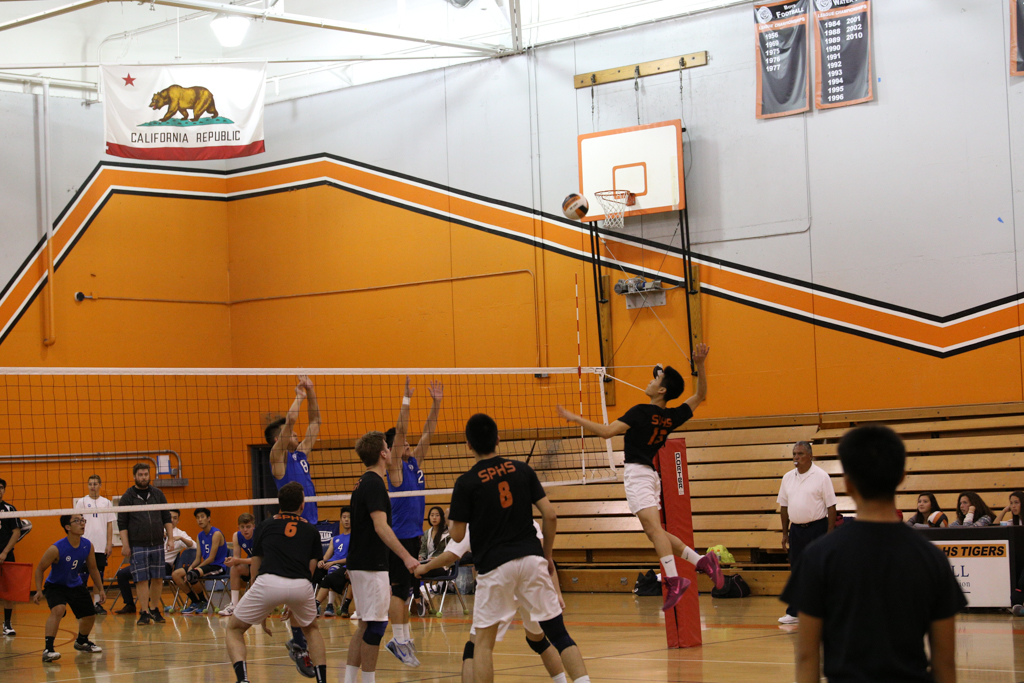 South Pasadena continued to defend its title as the volleyball powerhouse with a flawless 3-0 home victory over San Marino on the second league match of the season. Although junior defensive specialist Scott Kawakami was sidelined due to illness, the boys calmly stepped up to win without dropping a single set to the Titans. The Tigers are currently undefeated with a 16-1-1 overall record and a 2-0 league record.

Both teams battled with fighting mentalities right from the first play. After an intense session of numerous back and forth trades, South Pasadena drew first blood with junior Matthew Ng’s clean block on a Titan kill attempt. The Tigers carried the momentum from the play and sparked their offensive firepower, going up 7-1 early in the opening set to force a Titan timeout. The visiting team initially appeared lackluster on both offense and defense; however, the Titans recuperated their game plan after the timeout to make a run of their own to tie 12-12 midway through the first set. As the Tiger lead quickly disappeared, South Pas started to serve and block more carefully to reduce mistakes. The attentive approach by the home team created a leeway for another run as South Pas stood firmly at 19-13. San Marino would not easily let a set slip by, however, as the Titans responded with a 4-0 run to trail right back at 19-17. Sophomore Gunther Vaden completed a kill from junior Max Luck’s accurate setting to end a possible overturn in the visiting team’s favor. Then the Tigers finished off the set on a strong note as senior Richard Yu got the final point to secure the 25-22 set victory.

The second set was especially physical on both ends of the floor as both team’s defensive players recklessly dove toward the ground to receive each other’s kill attempts. Even though the Titans put up an intense effort to receive and counter each Tiger serve, block, and kill attempt, the Tigers did not fail to put numerous points on the scoreboard. San Marino continuously made serve receiving mistakes, at one time handing junior libero Alex Nakagawa three aces in a row. South Pasadena opened up a big 10-4 lead. In the second set, the Tigers worked to make less mistakes, thus preventing San Marino comeback runs that were prevalent throughout the first set. The Tigers easily dropped the visiting squad 25-15 in the second set.

In the final set, the Tigers instantly established a 9-3 lead and never looked back, completing an impressive 16-6 rally to completely shut down the San Marino Titans in the third set. In most cases, this is the time during the game in which the losing opposition would make its final run. The case for San Marino wasn’t the same, as the Titans appeared exhausted and overwhelmed by consistent kill successes from Yu and junior Greg Luck all game long and the Titan fatigue really revealed itself in the third set. Yu and Luck both led the Tigers offensively to accomplish a blowout set win with the score 25-9, keeping the opponent’s point total at a single digit.

“Adjusting to a competitive atmosphere was difficult at first after returning from a week-long break without any practice sessions,” Ng said. “However, as the game progressed, our gameplay became cleaner and more effective.”

The boys look to keep the winning streak alive tomorrow at an away non-league matchup against San Gabriel Academy tomorrow, April 8.

A primer to webcomics: 5 recommendations