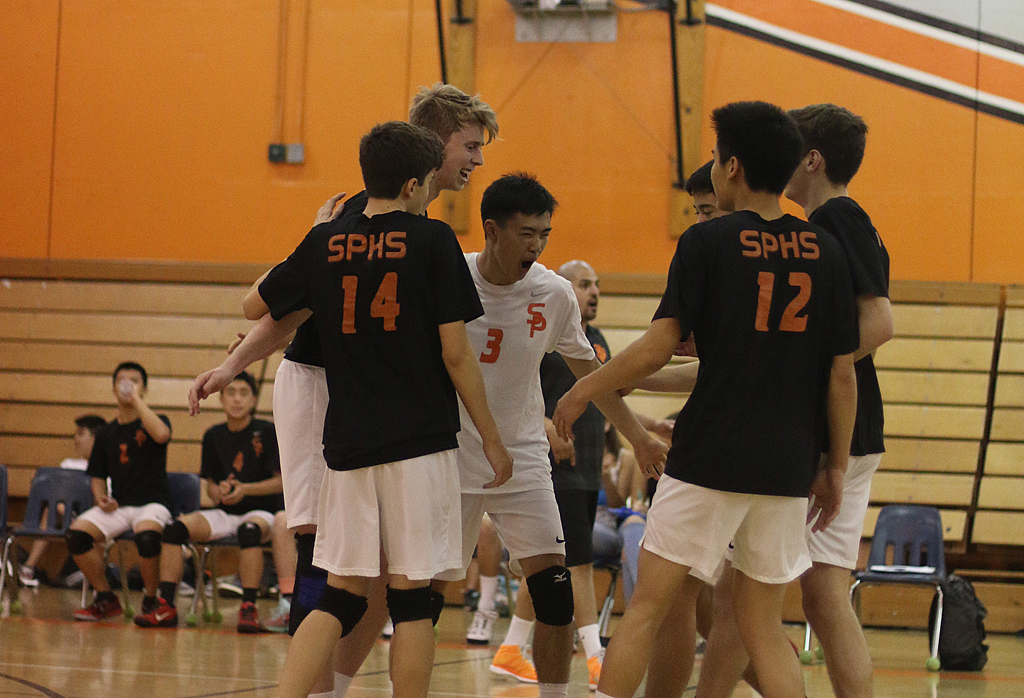 Boys’ volleyball claimed its first victory of the season after four sets over the St. Francis Golden Knights today. South Pas won the first two sets with a score of 25-16 and 25-21 but failed to stop St. Francis in the third and fell by a score of 25-15. The Tigers were able to hold off the Knights in the fourth set with a 25-21 victory to clinch the win.

Both teams came into the game determined to be the victors. The untested Tigers were eager to display their new lineup while the Knights were motivated to defeat South Pas after losing the previous season.

The Knights marked first blood on the court after making the Tigers perform errors in the opening minutes of the set. Senior Greg Luck put South Pas on the scoreboard with a clean kill followed by an ace to energize the team. Although St. Francis developed kills against the smaller South Pas blockers, Luck would hamper the Knights momentum the entire set with kill after kill to assume a dominant lead over the visiting team. Luck would extend the Tiger lead with a 5-0 run along with an ace to help close out the first set with a score of 25-16.

The second set was filled with multiple errors from both sides. South Pas had some mental relapses by serving the ball out of play while St. Francis suffered from moving violations while serving. Luck and junior Matt Scholtz contributed to the Tigers lead with easy kills against the St. Francis defense while holding off the Knights with good communication. The Golden Knights kept the score close, however, and made a run to tie the set at 18-18. St. Francis would commit serving errors and give the Tigers a 2-0 lead in the game to an eventual 25-21 second period victory.

South Pas struggled to maintain its dominance in the third as compared to the previous two sets. Luck came through with two kills over the Knight blockers to keep the Tigers in the game. However, clutch digs by St. Francis led to important kills against South Pas who began experiencing errors of their own. Scholtz would end the team’s scoring drought which was stuck at 14 points, but it wouldn’t be enough to overcome the Knight’s lead and the Tigers would lose the set by a score of 25-15.

The Tigers regained their lost momentum in the fourth set with Luck bringing down an authoritative kill to start a 4-0 scoring streak for South Pas. St. Francis capitalized on strong kills of their own against the Tiger blockers, but were shut down after an ace from senior Alex Nakagawa who put the game out of reach for the Knights at 23-18. Junior Gunther Vaden would close the set out with a block on the St. Francis hitters for a final score of 25-21.

“[In the third] we just couldn’t finish the ball,” Vaden said. “We were getting good sets but nobody could put it away for us. In the fourth, we had some good blocks and big kills to help create momentum and finish the game.

South Pas looks to improve to 2-0 against La Salle High School away on Thursday, March 3. The previous season the Tigers took a 3-0 victory over the Lancers.

Boys’ golf drops first match of the season against Polytechnic