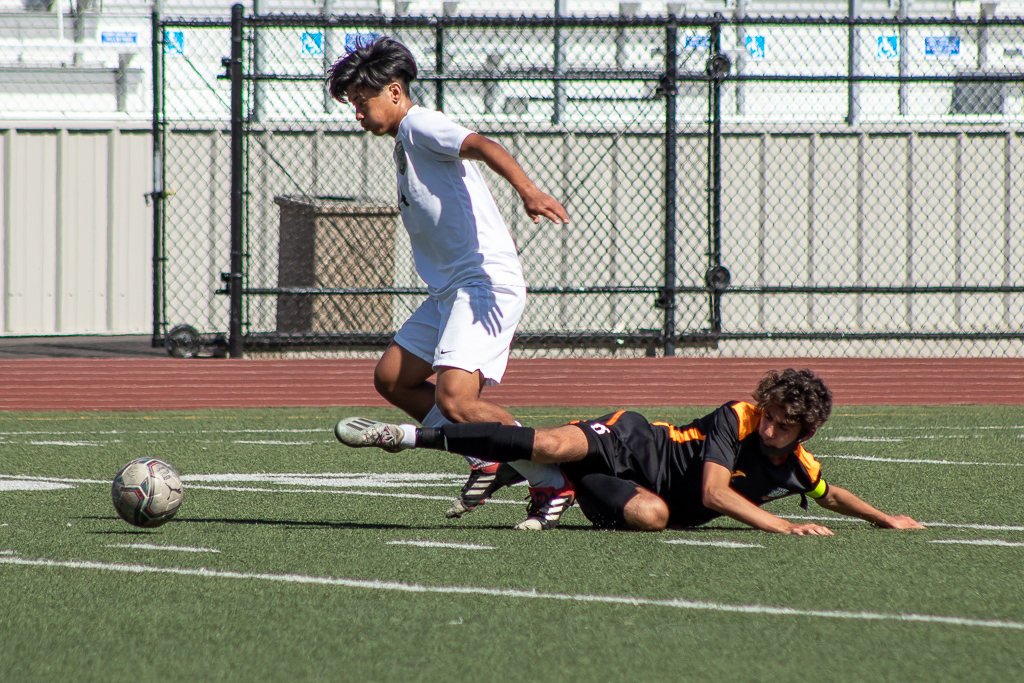 Boys soccer dominated 2-1 against the Temple City Rams on Tuesday, May 4 at their Senior Night game. Their record currently lies 4-3-1 as they prepare for their final league game.

The Tigers got control of the ball at the start of the game, attempting to shoot and capitalize off headers to score. Eventually, Temple City stole a failed pass and slid the ball right into the goal past sophomore goalkeeper Aidan Kinney.

The Rams continued to challenge the Tigers in a back and forth game, with the ball flying down both sides, but to no success. When South Pas regained control, Temple City upheld their strong defensive positions, not allowing any Tigers to get close to the net, forcing them to attempt long shots to score.

The Tigers were awarded a penalty kick and senior co-captain Reo Snyder was able to shoot a well-placed kick that escaped the keeper’s grasp, tying the game 1-1. Senior Porter Calva defensively chased the ball and got it back into the Tigers’ control and out of the South Pas net.

Towards the end of the first half, the Tigers maintained possession, with help from midfielders continually blocking any Temple City advancement, but the Rams’ defense prevented the Tigers from moving up on the scoreboard. Once they reached the goal, the Rams maintained their team strength, and blocked any attempts with hands, bodies and heads, finishing the first half at a unpredictable 1-1 tie.

South Pas attempted to score right out of the first whistle, but the Rams goalkeeper wouldn’t allow it. In hopes of breaking the tie, both teams charged the ball back and forth but no successful scores were made within the first 30 minutes of this half.

The Rams were awarded a free kick that was overshot, allowing the Tigers an opportunity to break the tie. In the final five minutes of the game, senior Kevin Ebata performed a rabona pass to an open Caleb Lee, who swiped the ball, and flew it right past the Temple City goalie, putting them ahead 2-1.

Frantically, the Rams tried to score one final goal. Kinney dove to stop the ball but failed, leaving an open goal for Temple City. In their attempt to shoot at an open goal, Calva ran up to deflect their efforts and successfully blocked. The Tigers put up a good fight the rest of the game, wrestling the opposition away from the goal any way possible and leading them to win 2-1.

“Expected performance from our seniors on their last game here at home,” Snyder said. “It was definitely a well-deserved win against the top team in our league and we go at it again against Monrovia.”

The Tigers plan to avenge their prior 2-1 loss against the Monrovia Wildcats in a final league game on Thursday, May 6.