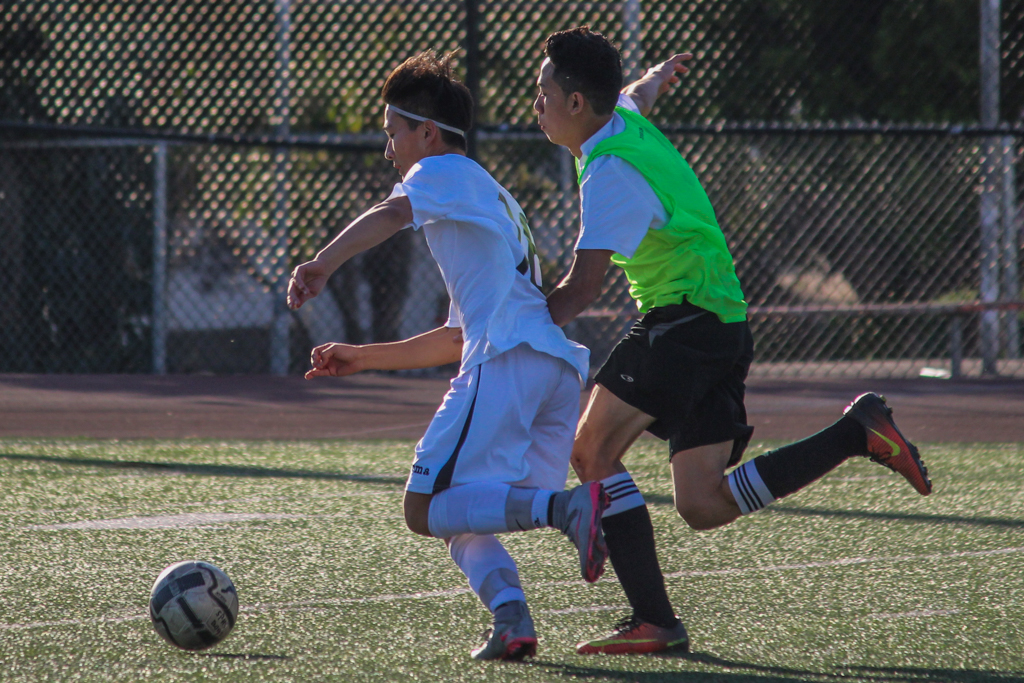 Senior David Choi pushes into Viking territory, as South Pasadena fought for its first goal. South Pasadena would get more than just one goal, as the team exploded for five total goals in the half. South Pasadena's record improves to 2-2-1 following the win.

South Pasadena boys’ soccer dominated its competition on Wednesday, January 24, defeating Blair by a score of 5-1. The Tigers scored all five of their goals in the first half, allowing them build a large cushion and play conservatively for the rest of the game. The win marks the team’s first victory in three games; a much-need win for South Pas’ confidence and league standing.

The Tigers had contributions from multiple players during their first half offensive onslaught. Freshman Caleb Lee, South Pas’ second leading scorer, struck first for the Tigers in just three minutes of play. The team doubled its lead just minutes later, as Lee found the back of the net yet again for his second goal of the game. Forwards Jack Renken and Niko Tripodis resumed their outstanding senior campaigns with goals of their own. Junior Jett Donlevy finished the tremendous first half with another goal (his first of the year), extending South Pas’ lead to five.

With such a large lead, the Tigers utilized a more reserved offense in the second half. The team chose to play back and defend the Blair offense attacks, rather than press the Viking defensive front. This strategy worked for most of the half until a beautiful bicycle kick from a Viking attacker broke the shutout. The Blair goal didn’t little to help their cause, however, as South Pas completed the win with little effort.

The offensive balance was a good sign for the usually defensive minded Tigers, who have struggled to score at times this year. The team still lacks consistency on that side of the ball, though, as they have scored just two goals in their losses/ties in league compared to their 11 in league wins.

With the win, South Pas improves to 2-2-1 in league and 9-3-3 overall. The Tigers also jump into third place in the Rio Hondo League, which would qualify them for CIF play if the season were to end today. South Pas will play three of their final five games at home, which bodes well for the team, as they boast 6-1-1 record on their home turf.

With the Tigers back on track, the team will travel to Monrovia on Friday, January 26 in a crucial league matchup. Monrovia, who is ranked second in the league, won the last matchup between the two teams 1-0.

The Forgotten Organ at SPHS