Boys’ soccer finishes preseason with a draw against Sierra Vista 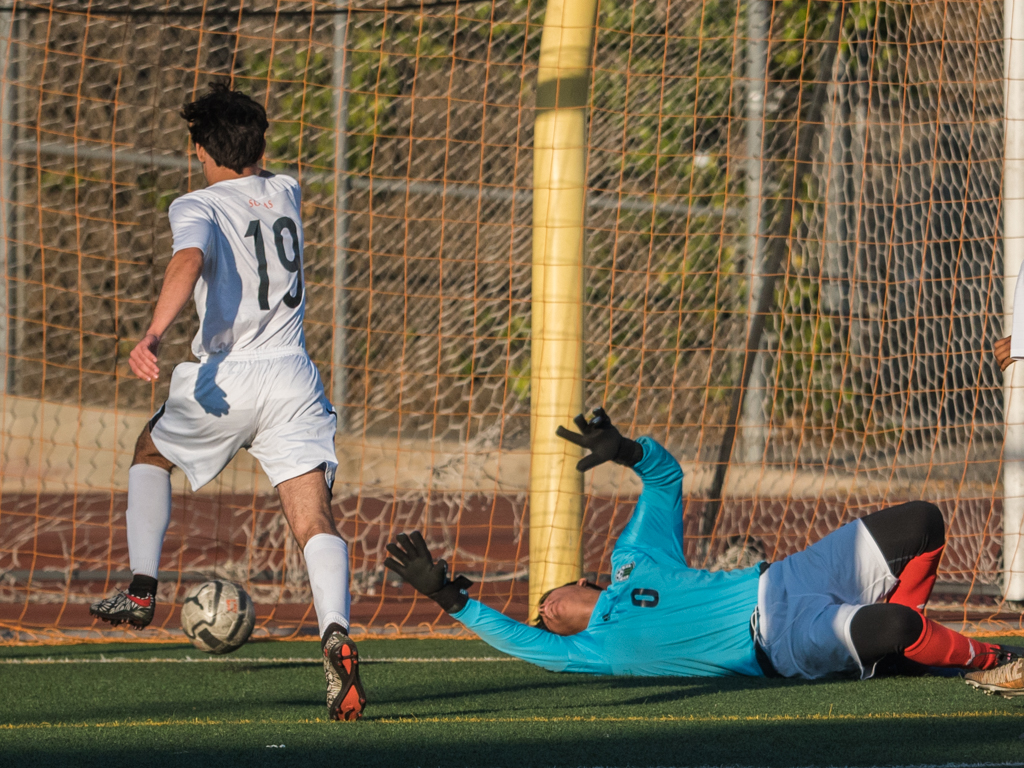 Boys’ soccer battled cold and windy conditions on Thursday, December 21 to secure a tie with visiting Sierra Vista Dons in a 0-0 gridlock. The game wrapped up South Pasadena’s preseason slate, and puts the team on top of the Rio Hondo League with a 7-1-2 record.

The first half was a stalemate between two evenly matched teams. Both teams struggled to find their rhythm on offense, as only five combined shots were taken in the first half. For the Tigers, the best chance to score came late in the half when junior Henry Barbera received the ball deep in Sierra Vista’s box. Barbera made a move on the goaline, shaking his defender and freeing himself up for the shot, but missed just wide left.

Sierra Vista had few shot opportunities as well, thanks in part to strong defensive play by sophomore Tianho Wei and senior Hank Rainey. Wei and Rainey, along with the whole defensive front, were consistent all game in preventing Sierra Vista from finding the back of the net.

The Tigers came out of the locker room with a new sense of intensity, as they controlled the ball in the early part of the second half. Barbera continued his relentless attack on the Sierra Vista defense with multiple shot attempts that just barely missed. Junior Gabe Lopez and freshman Caleb Lee also pushed the envelope in the latter half of the game.

Continuous missed opportunities halted South Pas’ momentum, however, and Sierra Vista began to control the time of possession and field position. The Dons peppered the Tiger’s goal with numerous shots which either narrowly missed or were halted by senior goalie Jack Gallagher. In one such play during crunch time, Gallagher made a game-saving stop by coming out of his normal position and sliding into a Don attacker, causing him to lose control of the ball, stopping the Sierra Vista offensive surge. Gallagher would finish with a season high eight saves.

Sierra Vista continued to pressure the Tigers defense for the remainder of the game. However, the Tigers received one last opportunity to score after a rare Don miscue. After the team’s defense forced a steal, junior Jonah Beadle got a one-on-one opportunity in the open field. Beadle dribbled all the way into the opponent’s box, before being tripped up by the defender. A tough no-call on the play led to a missed scoring opportunity and ultimately resulted in South Pasadena’s second tie of the year.

South Pasadena was without star forward Jack Renken, and it showed on the offensive side of the field. Renken, the Tiger’s leading scorer with eight goals, was sidelined due to an illness. The team missed Renken’s skillset, as they struggled to get anything going on the offensive side of the ball all game. Yet despite his absence, the Tigers played tough against a highly competitive opponent, showing that they have the capability to fight through injuries.

The team will take three weeks off for winter break before returning for league play in January. The Tigers will travel to San Marino to take on the rival Titans in their first league matchup on Wednesday, January 10.