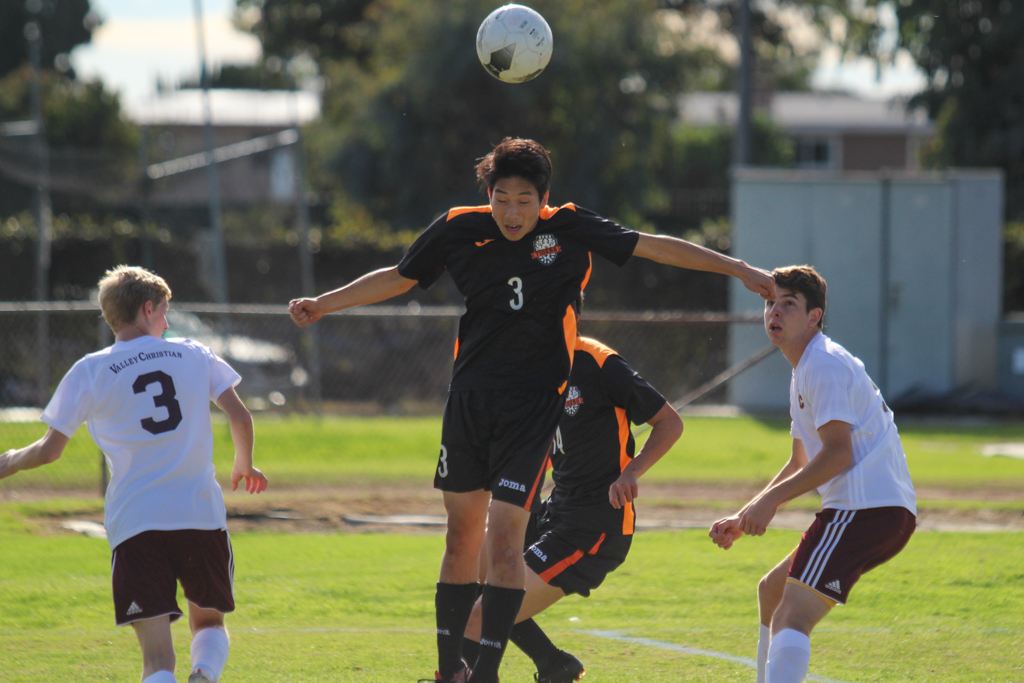 South Pasadena boys’ soccer survived and advanced past the wild-card game in the CIF SS playoffs with a thrilling victory over Valley Christian on the road on Wednesday, February 14. The tough efforts of both teams resulted in a 1-1 tie through the first 80 minutes of regulation. The score would remain at 1-1 after the two overtime periods, sending the match to penalty kicks, where South Pas won 3-2. With the victory, the Tigers will advance to the first round of the CIF playoffs to play at Crean Lutheran on Friday, February 16.

Despite playing sloppily in the first half, Village Christian took an early 1-0 lead over the Tigers. The Crusader goal came on its sole shot attempt of the half: a header off a corner kick. The sudden burst of offense surprised the Tigers, who had controlled the ball for most of the game up to that point. The goal also gave Valley Christian the ever-important momentum, which it carried into the second half.

South Pas had more opportunities of its own in the first period, but failed to execute with its close-range shots. Senior Niko Tripodis had the best goal-scoring chance for the Tigers, but missed just high over the crossbar. The rest of the half featured more poor passing and communication from both teams, resulting in a lack of quality offensive possessions and a 1-0 score at the half.

South Pas finally got on the board ten minutes into the second half when sophomore Tianho Wei received a throw in from a teammate and deposited the ball into the top left corner of the goal with a strong kick, tying the game at one. The goal is just Wei’s second of the year, but it proved pivotal in the Tigers’ win.

The second half rolled on without any real shot attempts from either team. Tied at 1-1, South Pas and Valley Christian headed into overtime; two ten minute halves in which any goal would end the game right away. Due to the increased pressure and intensity, the game began to get heated in the first overtime period. Multiple fouls were called, and both benches and their fans became very vocal. However, the two defenses stood strong, sending the game into another overtime period.

The second overtime half featured more excitement that the last forty minutes had offered. South Pas had a great goal scoring opportunity when they received a free kick from just outside the box, but freshman Caleb Lee missed high. Then, with just under two minutes left in overtime, Valley Christian nearly ended the game with a goal of their own. Utilizing a free kick, a Crusader player sent an arcing ball into the South Pas box. The ball seemed to travel out of bounds, but was inadvertadly kicked right in front of the goal with senior goalie Jack Gallagher out of position. Junior defender Sage Pierone saved the day for the Tigers, as he saved the following Crusader shot with his foot, while proceeding to clear the ball out of Tiger territory. This miraculous save effectively ended the second half of overtime and sent the game into penalty kicks.

South Pas won the coin toss preceding the PKs, and elected to have Valley Christian shoot first. The Crusader shooter placed the ball into the bottom left corner, but Gallagher made a diving attempt to save the ball. Senior co-captain Hank Rainey took the first shot for South Pas, which he sent into the back of the net. Senior David Choi and another Valley Christian player traded goals the next round, making the PK score 2-1. The next Crusader shooter missed way high in his attempt, giving South Pas the upperhand. Tripodis sunk the next goal, but so did Valley Christian, giving them one last chance at a victory.

The game came down to one final shot after junior Jett Donlevy had his shot saved. Gallagher seemed to make the play of the game on the next shot, but following the dramatized theme of the game, the Crusaders were allowed a retry because of a violation. Gallgher came up big again, however, diving and swatting the ball out of the goal, giving the Tigers the much-deserved win.