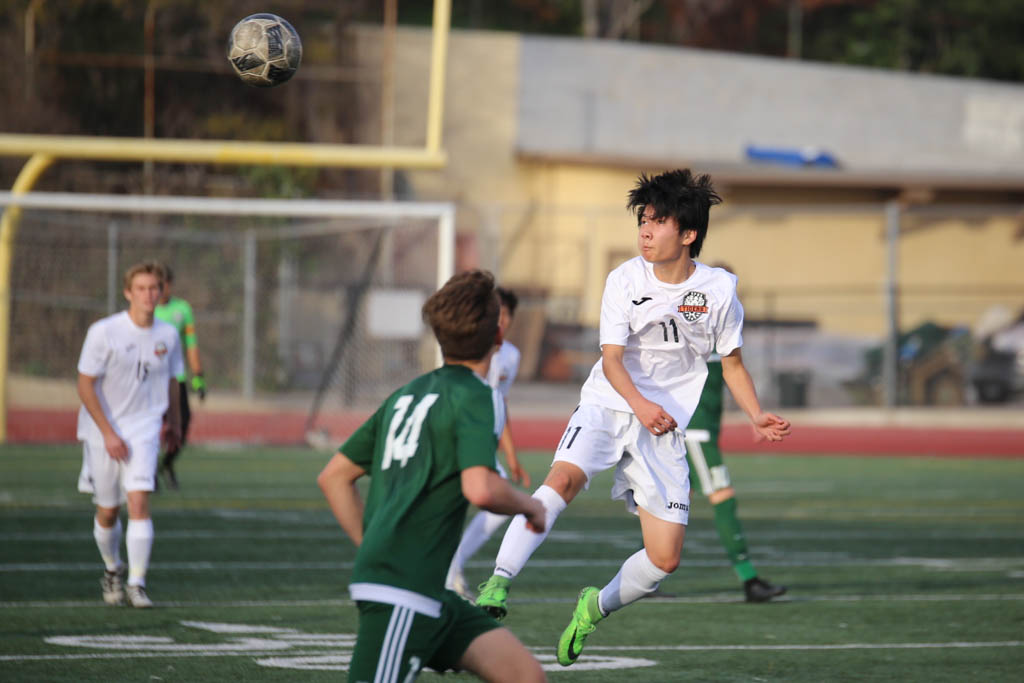 Boys’ soccer claimed its fourth win in a row after capping off a 5-1 walkover victory against Temple City High School last Friday, February 3. With the victory, South Pas moves up to second place in Rio Hondo League with a 6-2 record behind La Cañada’s 6-0-2.

Coming off of its victory over Monrovia last Wednesday, South Pas was determined to keep up the momentum it had built in its last game. However, slow tempo and hustle allowed Temple City to captivate the overall momentum on the field. After a dull start to the first half, the Rams took advantage of an opening on the Tigers’ defense and powered their way to the goal. After the ball was kicked from a Ram player towards the goal, senior Kevin Foster attempted to secure the ball but failed to reach it before another Rams’ player headered the ball into the net.

South Pas responded back with a reinvigorated offense led by junior Jack Renken. After leading the Tigers with one of his trademark bull rush attacks, Renken managed to pick up a penalty on the Rams and scored the team’s first goal off of the 30 yard free kick. With the score now tied at 1-1, both team’s slugged it out on the field with either team trying to find an edge in the game. South Pas looked to notch up another goal late in the half, but officials ruled that a foul was committed before the ball went into the net, leaving the score at 1-1 into halftime.

Nonetheless, Renken did not seem fazed at all after scoring another free kick goal in the second half and in similar fashion to his first goal. As the offense had produced for the Tigers, South Pas was determined to keep their lead while on defense. In the ensuing drive by Temple City, South Pas committed a penalty on the Rams, giving them a free kick. In contrast to Renken’s goal, Temple City failed to capitalize on the attempt when a diving block by Foster allowed South Pas to regain possession of the ball.

With the momentum now on their side, South Pas marched downfield in dominant fashion. Junior Niko Tripodis made use of his handy footwork and managed to set up Renken for another drive towards the net. After breaking past his defender, Renken notched up a third goal for the Tigers midway through the second half.

A few possessions later, Renken would repeat the same motions as the last goal and fired his fourth goal into the net to give the Tigers a 4-1 lead. South Pas refused to let up on Temple City and scored a fifth goal coming from sophomore Jett Donlevy to cap off the game with a final score of 5-1.

“We started off really slow but as the game progressed we began to settle into our playstyle,” Renken commented. “[Overall] it feels good to win and be able to go to the playoffs this year, especially after not qualifying last season.

South Pas will put their four game win streak to the test on San Marino’s field next Tuesday, February 7.