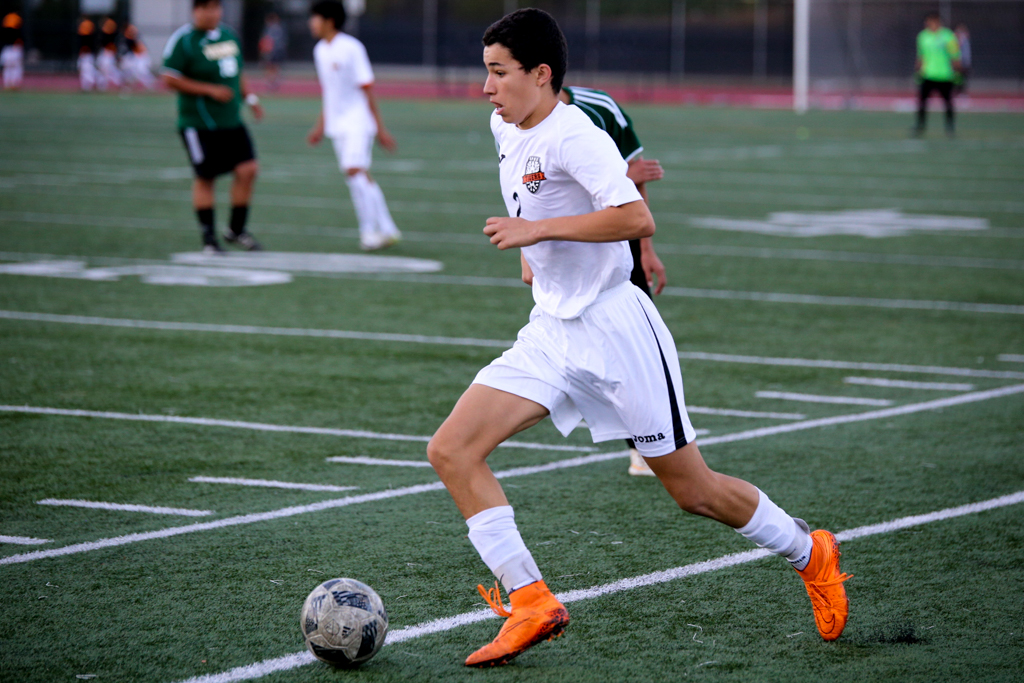 The boys’ soccer team claimed its third win of the season in the last two minutes of the game over Blair High School on Friday, January 27. After neither team scored on the other’s goals for the duration of the game, a final point blank shot lifted South Pas past the Vikings to a score of 1-0. South Pas now stands at 3-2 with a chance to enter CIF playoffs as the third place team.

What seemed like an easy victory for the Tigers quickly turned into an ugly game. Marred by little communication between teammates, bad passing and missed opportunities, both teams took the field with little intensity and coordination in the first half.

Kai Dettman dives for the ball against a blair opponent late in the game to win back the ball for the Tigers.

The Tigers, slow start to the game, saw their first bit of action when sophomore Raymond Yeo nearly scored five minutes in the game off of a free kick. Curving the ball perfectly towards the lower right corner, Blair’s goalie managed to cover the distance in time to make the save. South Pas attempted to gain a foothold the entire half by making effective stops on defense, only to go nowhere offensively. The only other solid look the Tigers would see came with ten minutes left in the half from sophomore Sage Pierone, who proceeded to fire a 25 yard shot with the goalie out of position, only to have it fly high over the crossbar. South Pas and Blair continued to compete against one another, both failing to make any headway, ending the first half scoreless.

Coming back in the second half, South Pas looked more polished. Better shot opportunities began to present themselves to the Tiger players, with shot after shot going straight to the goalie. After coming down to the two minute mark, junior Jack Renken found an opening between the Blair defenders and proceeded to rush towards the net. Although the goalie managed to block Renken’s initial shot, a quick follow up by Renken allowed the Tigers to take the lead late in the second half.

Following the Tigers goal, Blair countered desperately to try and tie the game. Sending every player, even the goalie, towards the South Pas goal, senior Kevin Foster managed to make a game-saving deflection right before regulation ended to give the Tigers the bittersweet victory.

South Pas will play at Blair High School on Monday, January 27, after its previously scheduled game was rained out last week.