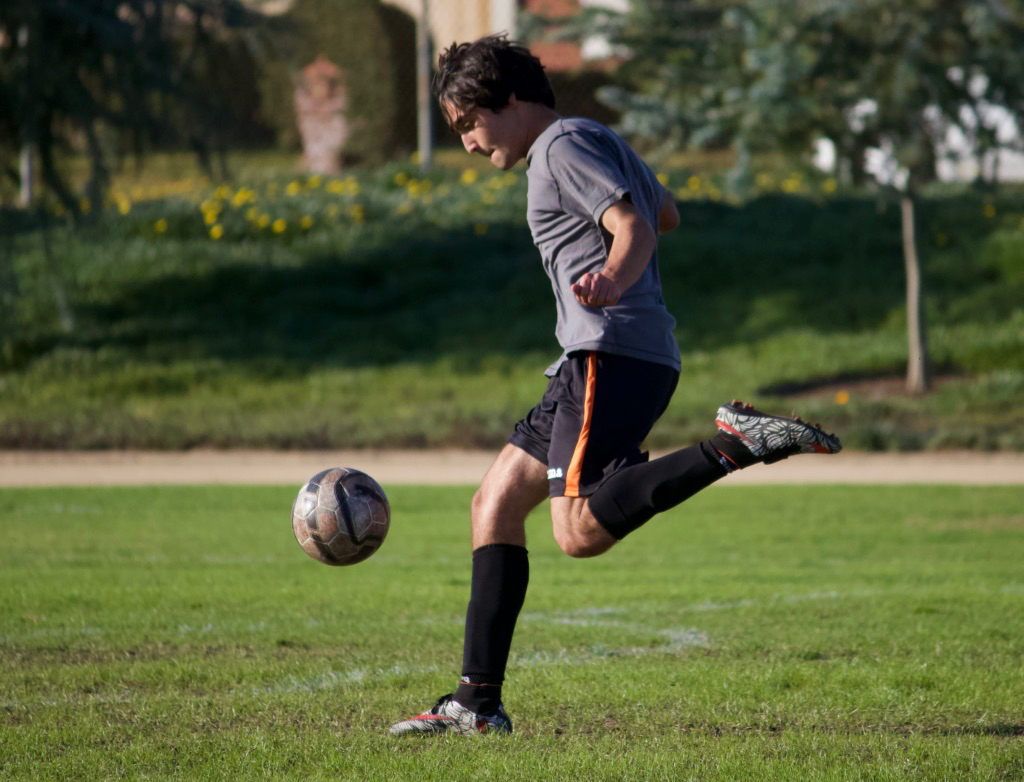 Senior Niko Tripodis dribbles the ball while preparing for South Pasadena's quarterfinals game. As a large offensive contributor, the senior finished the season with eight goals.

South Pasadena boys’ soccer’s improbable postseason run finally came to a close on Saturday, February 24, following a loss to Rubidoux in a thrilling CIF quarterfinal game. After a 0-0 finish to regulation, the two teams remained scoreless through overtime, taking the game into penalty kicks. The Falcons won the penalty kick round by a score of 4-3, and will advance to the CIF division six semifinals.

Both teams struggled to find any offensive rhythm in regulation. The best opportunity in the first half for the Tigers came from junior midfielder Eamon Hornish, who’s hard strike missed just high over the crossbar. Other than that shot attempt, however, South Pas failed to muster any offense in the first 40 minutes. On the defensive side of the ball, the tandem of defenders Hank Rainey and Addison Foord stalled the Falcon offensive front, keeping the contest in a scoreless tie through the first half.

The Tigers had more goal scoring chances in the second period, but yet again fell short of taking the lead. On one of the final plays of the half, junior Jett Donlevy took a shot from point blank range, but the Falcon goalkeeper made an incredible diving block to save a goal. Freshman Porter Calva controlled the rebound from the save, but he too missed just wide, effectively ending regulation and sending the teams into overtime.

The game followed the same course in the two overtime periods with the continuation of both teams’ offensive woes. For South Pas, the lack of offensive was even more frustrating, as they dominated the time of possession in overtime, but couldn’t get that extra pass into the box.

The game finally saw its first goals in the penalty kick session. Rubidoux was given the first shot in PK’s, which they translated into a 1-0 lead. Senior Jack Renken tied the PK round at one when he scored on the proceeding kick. South Pas took a 2-1 lead next round after a Rubidoux miss (saved by senior goalie Jack Gallagher) and a Rainey score. Over the course of the next two rounds, the Falcons would tie the game at two, capitalizing on two South Pas misses. Junior Kai Dettman traded goals with another Rubidoux player, bringing the score to three all.

In the sixth round, the first round over the specified amount of rounds in penalty kicks, the Falcons scored their fourth goal, the game winning goal. South Pas missed their proceeding shot, ending the game with a 4-3 Rubidoux win in penalty kicks.

2017-2018 marks one of South Pas boys’ soccer’s most successful seasons, as they finished with a 15-7-4 record, while placing in the top eight in CIF Southern Section division 6. The team lived up to and surpassed the lofty expectations put on them at the beginning of the season. The offensive MVP for the Tigers this year was no doubt Renken, who scored 23 goals in just 21 games played. Senior Niko Tripodis (8 goals) and freshman Caleb Lee (7 goals) also made key contributions to that side of the field. On defense, Rainey was the clear captain, leading his team both vocally and physically. Foord and fellow junior Sage Pierone also put together a solid year on the defensive side. Gallagher was lockdown in the goal all year, accumulating 54 saves, while making numerous other key plays.

The Tigers will have to replace many of these players next year, as seven seniors will be leaving the program, including Renken, Rainey, and Gallagher. However, the juniors and underclassmen, especially the freshman, gained valuable experience in the team’s four postseason games this year, which they will hope to take into next season.

The strengths and weaknesses of the shared universe